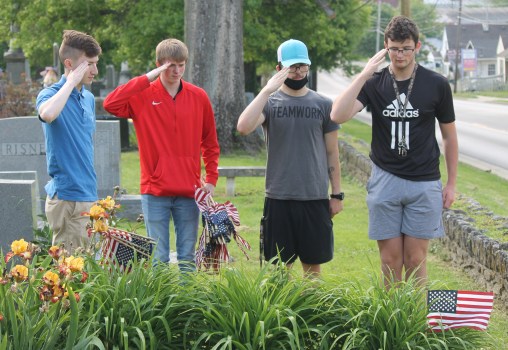 Army JROTC students from George Rogers Clark High School salute after placing a flag on a soldier's grave at the Winchester Cemetery before Memorial Day. The students recently catalogued all the veterans graves in the cemetery. From left: Preston Maxwell, Michael Spencer, Jacob Hudson and Ethan Muncie. (Photo by Randy Patrick) 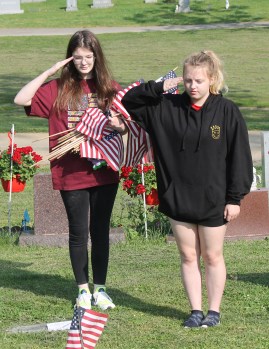 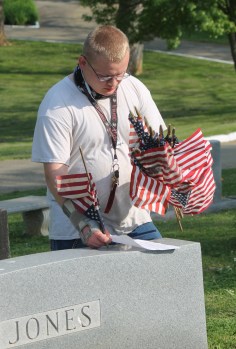 Jonathan Baker, a senior JROTC member from George Rogers Clark High School, checks his list of soldiers while placing flags on veterans' graves at the city cemetery Wednesday. The students built a database of veterans' graves in the cemetery last fall. (Photo by Randy Patrick) 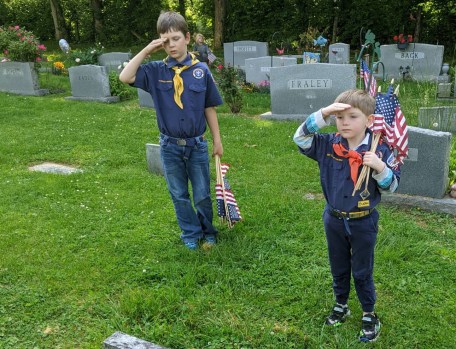 Members of Cub Scouts Pack 22 of Winchester salute veterans at the Winchester Cemetery after decorating their graves with flags for Memorial Day. (Submitted photo) 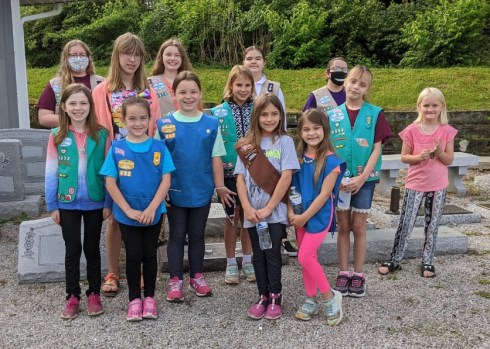 Members of Girl Scouts Troops 5358, 492 and 2272 assisted the George Rogers Clark High School JROTC in putting out flags on the graves of veterans as Winchester Cemetery. (Submitted photos)

American flags decorate the graves of veterans in the Winchester Cemetery this week. They were placed Wednesday by students from the Army Junior Reserve Officer Training Corps at George Rogers Clark High School.

It’s something the JROTC students do twice a year, before Memorial Day and Veterans Day, to pay their respects to our nation’s former military personnel.

Lillian was working with Karsyn Carroll, a freshman member of the group. Both girls are considering the military as a career.

“It gives us a chance to get to know who has served for us,” Karsyn said.

Master Sgt. Larry Lee, the leader of the high school’s ROTC program, had about 30 students at the cemetery Wednesday placing the flags, something the chapter has been doing for 16 years.

It’s something “we can do to honor those who fought for us,” Lee said.

“It’s a great service to the community,” Winchester Mayor Ed Burtner, a Marine veteran, who was there with the students, said. “It’s a perfect way for them to be involved.”

Lee mentioned that last fall, during the coronavirus pandemic, JROTC students spent more than a month documenting the gravesites of veterans in the cemetery and building a database and a catalog of more than 70 pages so people will know where veterans are buried. That makes it easier for the students to follow that list to know where to place the flags prior to Memorial Day and Veterans Day, he said.

The instructor said that if anyone knows of a veteran whose name is not included on that list to contact the JROTC program at the high school and they will be added.