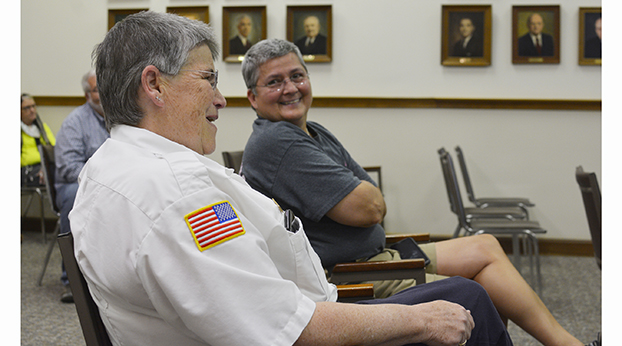 Chief Cathy Rigney of Winchester Fire-EMS laughs at a joke about her coming back as a part-time paramedic after the city commission accepted her retirement Tuesday. Earlier during the meeting she had argued for better pay for paramedics. At right is Dee Wooley.(Photo by Randy Patrick) 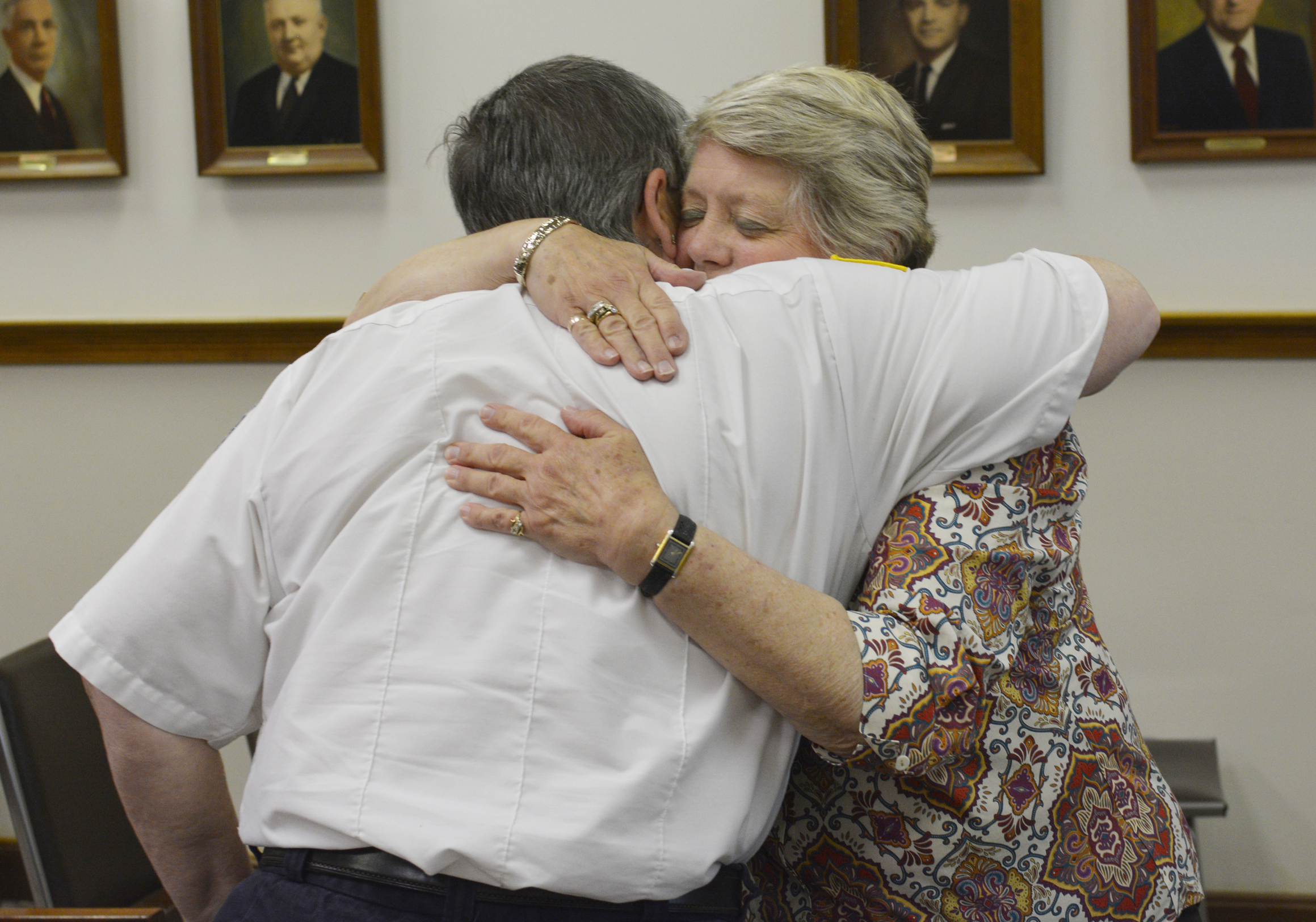 City Clerk Joy Curtis didn’t want to do it. Nor did Mayor Ed Burtner. But somebody had to read the order accepting the retirement of Cathy Rigney as chief of Winchester Fire-EMS.

After 35 years with the department, Rigney is hanging up her helmet.

No longer will she be feeling the heat outside a burning house or taking the heat inside the firehouse or City Hall. Rather, she will be basking in the warmth of the summer sun on a beach in Florida with her partner, Dee Wooley.

It was “with regret” that the city commission accepted her retirement at the end of its meeting Tuesday.

Commissioner Kitty Strode praised her for “35 years of diligent service,” and City Manager Mike Flynn thanked her for her help during his first year in his new role and for “always being respectful” even when they didn’t always agree. Commissioner Jo Ellen Reed thanked her for her empathy when she lost her mother by sharing her own experience of losing hers.

Commissioner Ramsey Flynn, a former city firefighter himself, remembered that he and the chief “ate a lot of meals together and fought a lot of fires.” And it had been “an honor” to work with her, he said.

He also brought up the fact that earlier that same evening she had strongly urged the commission to pay paramedics more so they could keep the ones they have and hire new ones.

“You did something that no other chief has been able to do for the paramedics,” he said.

“Take care of them,” Rigney told him — not once, but twice.

Burtner told her she should enjoy her retirement.

“Thank you all,” Rigney said. “It was an honor and a privilege.”

Rigney started with the ambulance service in 1986 before EMS merged with the fire department. Since 1988, she has worked with Winchester Fire-EMS as a firefighter, paramedic, and battalion chief.

In September 2015, she succeeded Chief Eric Hunter as leader of the 56-member department after having served as interim chief.

At the time, Rigney was the first female chief of a full-time paid fire department in Kentucky.

During her time as chief, the department completed construction of an $800,000 training tower, purchased several ambulances and fire trucks, including one that cost $1 million, for which she was instrumental in getting a federal grant to buy it.

According to Burtner, the hallmark of her career as city fire chief has been her cooperation with other departments in the region as part of the Bluegrass Emergency Response Team. A little over a year ago, she led the response effort along with the Clark County Fire Department and 33 other agencies in fighting and containing a dangerous fire and environmental disaster at a recycling center on U.S. 60.

As a career medic, Rigney worked to improve EMS services in Winchester and Clark County, and, Burtner said, worked tirelessly to maintain ALS coverage county wide despite staffing shortages, and worked with the local hospital and other agencies to ensure essential EMS response.

Curtis described Rigney as “smart, articulate” and “a major credit to her department and the city.”