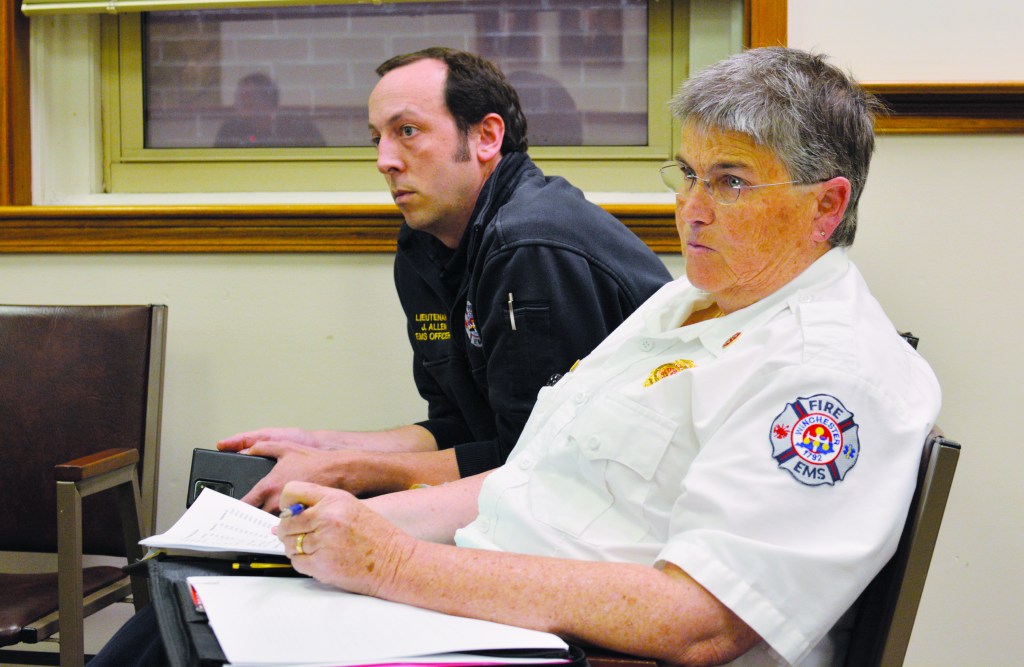 "If that gets medics in the door, then do it!" Chief Cathy Rigney said in regard to paying part-time paramedics $20 an hour. At left is Jacob Allen. (Photo by Randy Patrick)

Winchester won’t have enough paramedics for its ambulance service until it pays them what they’re worth.

That was the point Chief Cathy Rigney of Winchester Fire-EMS made rather forcefully during a Board of Commissioners meeting Tuesday.

City officials discussed several possible hourly wages for part-time and full-time paramedics, and when someone  brought up the figure of $20, the chief said: “If that gets medics in the door, then do it!”

Rigney, who was in a budget discussion Thursday, said she estimates it will cost the city about $100,000 to get paramedics’ pay up to where it needs to be.

“We need to be more competitive in the job market,” she said.

She said the city needs to raise pay for both part-time and full-time paramedics.

During the discussion Tuesday, it was revealed that the city has only one part-time paramedic currently.

Also during the meeting, the board approved a one-year extension of its contract with Cross Medical, formerly Breathitt-Wolfe EMS, to handle non-emergency ambulance transfers. However, the board included the caveat that the time limit for canceling the agreement had to be 60 days, not 30. The owner of the service has since agreed to that.

The board voted 4-1 to renew the contract, with Commissioner Shannon Cox voting no. White said he has never been impressed with the quality of the service and he doesn’t want some ambulance service from another county doing transports in Winchester and Clark County.

Also during the meeting:

– The board approved requests to close Washington Street from Maple Street to Oliver Street from 9:30 p.m. to 2 a.m. for a graduation party on Friday, May 28.

– Approval was given to close Main Street from the Clark County Courthouse to Boone Avenue on Friday, Sept. 24, from 5 to 8:30 p.m. for the Rally for Recovery Walk.

– An order employing Stevie Rice as a police officer was approved.