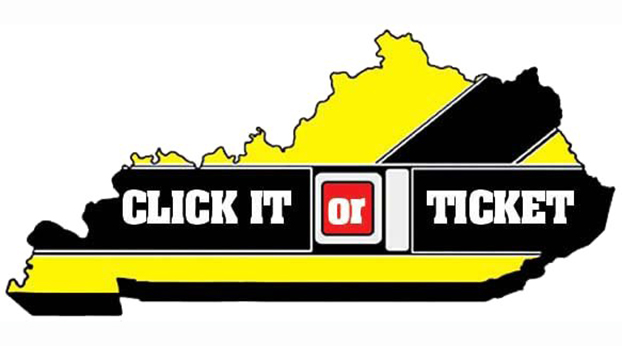 FRANKFORT, Ky. (KT) – With the Memorial Day holiday weekend approaching, the Kentucky Transportation Cabinet’s Office of Highway Safety is joining with law enforcement agencies across the state in the annual Click It or Ticket safety campaign.

“Kentuckians came together this past year to help save lives during the COVID-19 pandemic and we’re asking for that same dedication to safety on our roadways,” said Gov. Andy Beshear. “We must have the public’s help to spread this life-saving message: Commit to safe driving behaviors when behind the wheel, and everyone, both drivers and passengers, should pledge to buckle up.”

According to the Kentucky Office of Highway Safety, there were 780 highway fatalities in 2020, of which 592 were occupants of motor vehicles. Of those killed in the crashes, 338 were not wearing a seat belt, car seat, or booster seat. Six of the 338 were children ages nine and under, four of which were improperly restrained.

“It only takes two seconds to buckle your seat belt,” said Transportation Secretary Jim Gray. “It’s a simple act, yet it gives you the best chance of surviving a crash. Sometimes even the most attentive drivers are involved in a crash caused by other drivers, so buckling up should always be the first thing you do when entering a vehicle.”

The NHTSA says a majority of unrestrained deaths occur during nighttime hours defined as 6 p.m. to 6 a.m. In Kentucky last year, 261 highway deaths occurred at night. Of those, 162 people who were killed were not wearing seat belts.

“Kentucky State Police will partner with local law enforcement departments across the state to provide a high visibility enforcement effort,” said KSP Commissioner Phillip Burnett, Jr. “Our focus is about saving lives and ensuring everyone makes it home safely.”

To reinforce this message, more than 80 law enforcement agencies throughout Kentucky have participated in the Click It or Ticket “Local Heroes” initiative.

According to the NHTSA, when worn correctly, seat belts reduce the risk of death by 45 percent for front-seat vehicle occupants and by 60 percent for pickup trucks, SUVs, and minivan occupants.

Properly fastened seat belts contact the strongest parts of the body, such as the chest, hips, and shoulders. A seat belt spreads the force of a crash over a wide area of the body, putting less stress on any one part, and allows the body to slow down with the crash, extending the time when the crash forces are felt by the occupant.