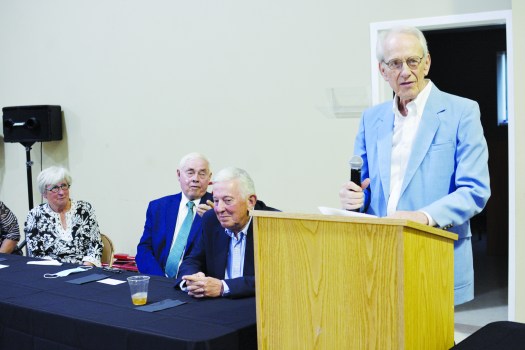 "I was invited here under false pretenses," historian Harry Enoch joked. He said he thought he was coming to roast Sandy Stults, left, but the appreciation dinner was also to honor him and Col. Jerry Cecil, second from left. The three historians have been helpful to the Winchester Black History and Heritage Committee. (Photo by Randy Patrick) 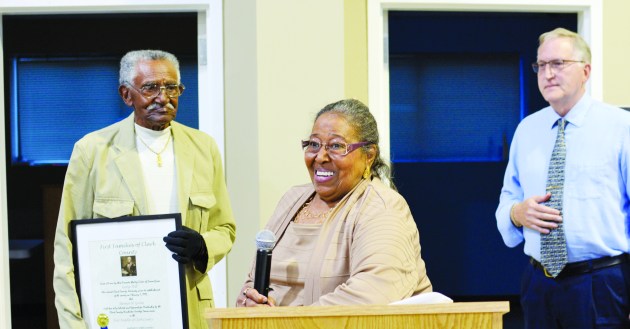 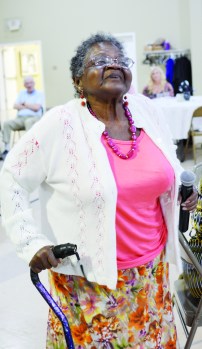 Barbara Jean Owings speaks after receiving the No. 1 fan award from the Winchester Black History and Heritage Committee. (Photo by Randy Patrick) 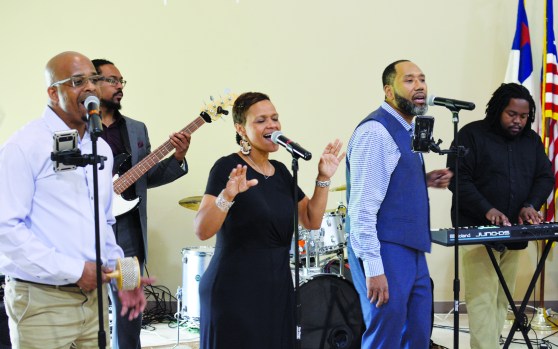 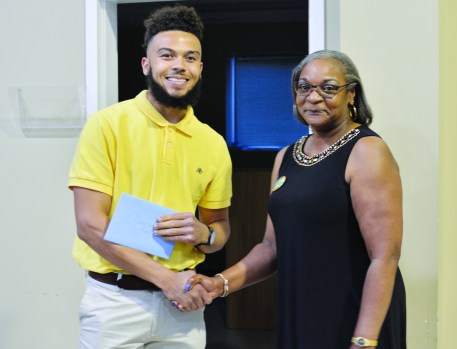 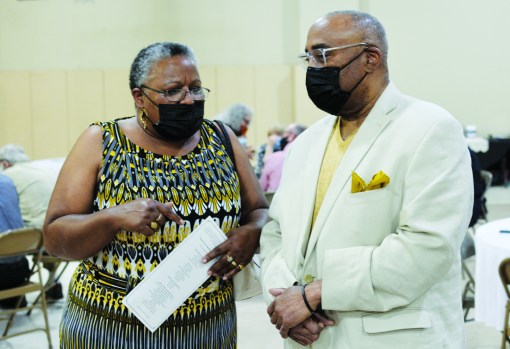 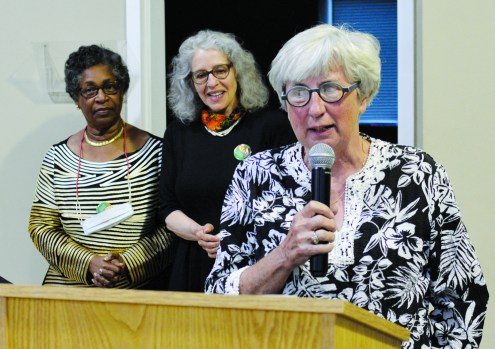 Historian Sandy Stults tells the audience she appreciated most of the comments about her at a roast/toast Friday night at First Baptist Church on Hickman Street. (Photo by Randy Patrick)

Pastor Lee Cruse told his audience that when he and Sandy Stults were both schoolteachers at Conkwright Junior High in the 1970s, he “didn’t like her.”

“All she talked about was she was from Jenkins, Kentucky. Jenkins, Jenkins, Jenkins. I got sick of hearing about Jenkins,” he said, and how she had graduated from the high school there, and how it had “the longest Main Street in Kentucky.”

“Well, I was up there about two months ago, and that’s not a main street. It’s a road that just goes right through” the little town in Eastern Kentucky, he said, drawing laughter from those attending the dinner at First Baptist Church on North Highland Street.

Cruse recalled how the mischievous Stults and some of her cohorts had twice stolen his comfortable chair, even after he had chained it to his desk.

And when he went on vacation to Myrtle Beach to get away from her shenanigans, he “walked out on the balcony, took a deep breath, smelled that wonderful ocean air, and then he “heard this voice.”

“She had booked a room right next to me,” he said.

Stults, president of the Bluegrass Heritage Museum, was one of three local historians who were honored Friday night by the Winchester Black History and Heritage Committee for helping the group with its first publication. The others, both retired, are Harry Enoch, who writes a history column for The Winchester Sun, and Jerry Cecil, who taught history for years at what is now Bluegrass Community and Technical College.

The appreciation banquet was described as a toast, but secretly it was also a roast of the three historians.

Also during the dinner, Steve Justice, president of the Clark County-Winchester Heritage Commission, presented the first ever First Families of Clark County certificate to a Black couple, Sherman and Anna Chambers Greene.

And Dawson Gay, a graduating George Rogers Clark High School student who will be studying business management at West Virginia State University this fall on a football scholarship and wants to be the CEO of a major company, was the recipient of the committee’s $1,000 minority scholarship for 2021.

Cruse’s comments about Stults were mostly in jest. They have since become friends, and he expressed his appreciation for her as an educator.

“I believe great teachers are called,” he said, and there is “no greater reward” than to see “the light come on” in a child’s eyes when the teacher is able to connect with a student.

Larry Dixon, who grew up in Stults’ hometown of Jenkins and was a good friend of her late husband, Al, recalled that his father was the school principal and there was a girl who “challenged his authority at every turn” and was always up to some kind of “high jinks.”

She also liked to gossip, he said, and she spread the rumor that he was sleeping with his teacher, which was true. But what she didn’t tell was that his teacher was his brother who briefly shared a basement bed with him in their crowded family home for a short time during his first year teaching.

Former county official Gardner Wagers called Stults “the face of the museum,” and talked about her tireless work and how she had made the museum “an icon” of the community.

James Robinson talked about he and Enoch connected not only through history, but also jazz.

“He’s got all kinds of albums. We get together and listen a little bit and we go to a few places in Lexington and Richmond,” he said.

Originally from Mount Sterling, Enoch served in Vietnam in the 101st Airborne, and after a career as a biochemist, he has focused on researching and writing about Kentucky history and is the author of several books.

Cecil, too, is a Vietnam veteran and a recipient of the Distinguished Service Cross, the second-highest medal for heroism in the Army, and was featured in Rick Atkinson’s book, “The Long Gray Line,” about the West Point class of 1966 who served in the war.

One of the things he has taught young people was about the importance of service and sacrifice.

After being honored Friday night, he followed up on a comment Enoch had made about Americans’ appalling ignorance of their own history, and noted that those who attended Stults’ events at the museum tend to be “about our age.” And it’s important, he said, to pass on the knowledge to those who come after them, he said.

“It’s really up to us to mentor someone younger than us if we want to keep the history of Clark County going,” he said, and to “pass on the magic” of history.

Joyce Morton, president of the Black History and Heritage Committee, said the appreciation banquet for the group, which was formed in 2014, was made possible by many benefactors who were listed on the program.