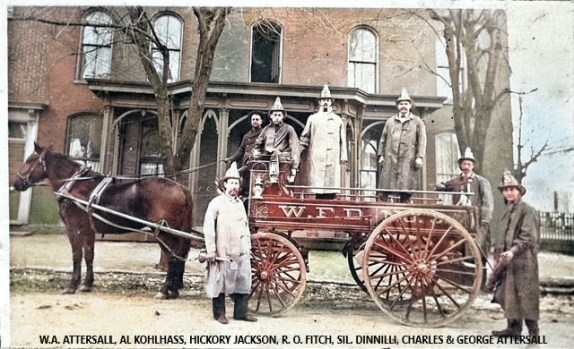 Several months ago, there was a photo circulating on the internet depicting unidentified workers digging along Winchester’s South Main Street. With the help of WMU we believe the gentleman in the center (of some prominence) to be Winchester Water Works Superintendent (for 48 years) Charles Attersall. Having no other photos of Charles made it unverifiable. But then I remembered a photo of the Winchester Fire Department I had purchased many years ago on eBay. The photo actually identified the firemen, and I remembered the name Attersall. Alas, Charles was a fireman as was his brother, George and father, William. Seeing William reminded me that he served as mayor, but for only two years.  I began to dig, and with the help of others, this is what we discovered.

Until his death by consumption (tuberculosis) on Nov. 29, 1908, William Albert Attersall remained a true public servant. He was born in London, England, on Feb. 24, 1841, and his family came to America when he was 11. They lived first in Cleveland, Ohio then moved to Winchester in 1855.

During the Civil War he served in the Kentucky 20th Infantry at the rank of captain in the Union Army under General Sherman. During the war, he met Charlotte Boro of Louisville. They married in 1869.

In 1886, J. H McClymonds sold his carriage business on Fairfax Street (later Lexington Avenue) to Attersall, who grew it to become one of the largest in its class in Kentucky. Attersall built and restored carriages for which he attained quite a reputation, as well as selling carriages that he brought from Louisville and Cincinnati.

In 1905 Matt Bean acquired the business. Then a disastrous fire in 1909 destroyed the Attersall building and gutted the city’s engine house next door. Attersall had previously donated the land to the city on which the engine house had been constructed.

His service within the Winchester Fire Department began as a teen in 1858. At one point during his tenure, he was appointed by the City Council to purchase a fire engine and equipment. He took it upon himself to negotiate an extra $1,500 in supplies for the department at no extra cost to the city. Attersall served over 20 years as chief in the 1880s through Dec. 7, 1903.  In 1890, with a department of 57 volunteers, his annual salary was $250. It is believed the Attersall initiated the military type ranking within the department, and for that, in part is why he is sometimes referred the “father of the Winchester Fire Department.”

Attersall’s tireless commitment to Winchester continued by serving on the city’s first board of  education, where he promoted and encouraged the grade system. After serving on the City Council for many years, he was elected Winchester’s fifth mayor in 1905. He served as mayor from 1906 until 1908, when in the final year he grew ill with tuberculosis.  It was during his term that the Jamestown Exposition declared Aug. 23, 1907 as Winchester Day. It was here that former Mayor John Garner shared the stage with President Theodore Roosevelt.

On April 3, 1908, Attersall sent this letter of resignation to the City Council:

“Gentlemen: Owing to ill health, I have decided upon the advice of my physician, that I ought not in justice to myself or the city, longer retain the position of Mayor.”

“I am not remindful of my obligations to the citizens of Winchester and to you gentlemen, that was conferred when I was chosen Mayor, but it is in great measure because of my regard for the welfare of the city that I feel that the direction of its affairs should be turned over to one whose physical condition is better for the performance of the duties of the position”

“I respectfully tender my resignation as mayor to take effect at once.”

The council accepted the resignation and appointed J.A. Hughes to fill the unexpired term of Attersall, who died  just eight months later.