Wright signs to play at Morehead 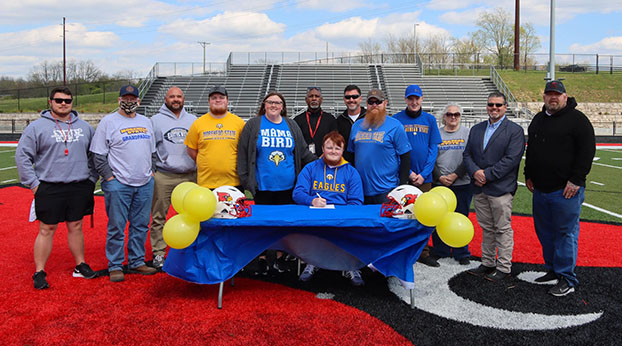 By Jon Paul Martin
Special to The Sun

Morehead State University recently picked up George Rogers Clark attendee and future graduate, Tommy Wright. Wright is a senior at GRC, who is enjoying the last few days of his senior year at the school he loves so dearly.

Not only was Wright a team captain for GRC, but he was also a key offensive lineman that led the Cardinals to much of their success throughout his four years with the football team. But understanding, respecting, and loving the game doesn’t just start with high school football.

Growing up in Winchester, Wright grew fond of football at an early age. It was an outlet for him, a place where he could feel free.

In fifth and sixth grades he played for the Civitan football league where he learned from coach Henry Mack the foundation of the game. This is where Wright fell in love with the game and developed the techniques required to succeed.

From seventh to eighth grade was when football started to become a passion for him. Football at Robert D. Campbell Junior High School, under coach Perry Williams, was everything he asked for. It was there he learned the bigger picture of the game and how deep the brotherhood was.

From freshman year on Wright enjoyed every minute of high school football in the great state of Kentucky. Playing under now-retired, coach Oliver Lucas, Wright’s will to win shined bright as a Cardinal.

Not only is he a star offensive lineman, he also spends much of his free time competing in Olympic weightlifting. He is currently a state record holder in snatch and total weight lifted.

Wright likes to live by a saying that goes, “When times get tough and you feel like quitting, just push through. Everyone’s felt the way you do right now, but what separates you from them is how you react.”