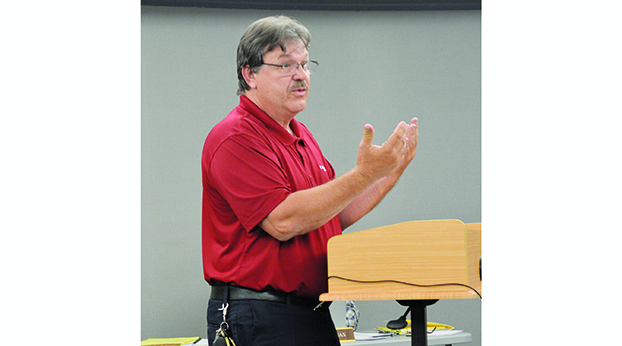 Donald Stump, shown here speaking about school facilities projects, said this week that he likes the location for the new Clark County Preschool to be built behind Strode Station. (Photo by Randy Patrick)

The Clark County preschools will have a new home on the west side of town.

Monday night, the Board of Education decided the site for the new preschool building will be on 12 acres of land it already owns behind Strode Station Elementary School and a short distance from Baker Intermediate School.

He said the school will be surrounded by a new subdivision.

“We love the idea of a community being all around the school” because it’s a “community school,” he said.

In March, the board approved the BG-1 for the school, which notifies the state Department of Education of the district’s intention to build the school.

The $9.3 million preschool will replace the current building at 30 Beckner St. that was once the Hannah McClure Elementary School. That facility is outdated and doesn’t allow enough room for growth, say school leaders. The plan for the new school is to build to accommodate 450 students.

Randy Brookshire of Winchester, with Ross Tarrant of Lexington, is the architect for the project.

Other sites that were considered were 23 acres on U.S. 60 or Lexington Road, near the school district’s Central Office, and 9.5 acres next to Conkwright Elementary School on Mount Sterling Road. The board had bought that property and tore down an old factory building on it to build the preschool, but there were concerns about it not being big enough for a building to hold the number of students the school is expected to have.

The preschool is one of two major construction projects the board submitted BG-1 documents for in March. The other is a new Phoenix Academy alternative school adjacent to the George Rogers Clark High School building. It is expected to cost $1.8 million and accommodate 90 students.