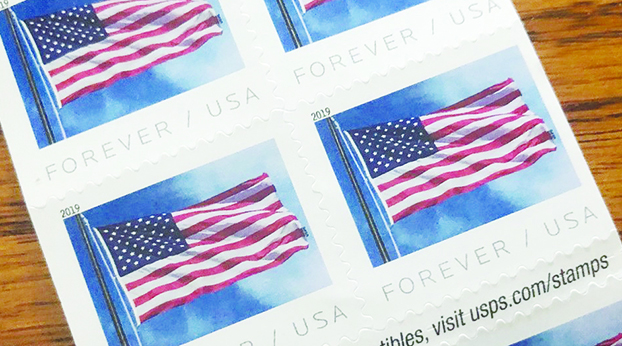 The price of postage is going up again, the USPS announced Friday afternoon.

The United States Postal Service will increase prices on first-class mail as well as some other classes of postage, according to an announcement Friday afternoon.

First-class postage will increase to 58 cents from 55 cents effective Aug. 29, 2021, as USPS says it is working to stabilize finances amid declining mail volume and slower delivery.

The rate changes would put in place “a rational pricing approach that helps enable us to remain viable and competitive,” said Postmaster General Louis DeJoy.

The price increase of a first-class stamp is part of a set of proposed rate hikes filed Friday with the Postal Regulatory Commission, which is not expected to oppose the rate boost. Some consumer groups contended that the timing of the announcement was intentional to help it have less exposure than normal because of the holiday weekend.

“The news is bad,” according to a National Newspaper Association email. The increase for periodicals (newspapers and magazines) will be 8.806 percent. The cost to mail those products in-county, which is the lifeblood of community newspapers, will be 8.31 percent.

Brett Wesner, chair of National Newspaper Association and president of Wesner Publications, Cordell, Okla., said the rate announcement was grim news for community newspapers that have been fielding months of complaints that subscribers are not receiving their copies on time.

“Nothing about this scenario is good,” Wesner said. “These increases will require many newspapers to increase subscription prices to cover this new cost and readers will think we have lost our minds to charge more when USPS cannot get the paper to so many on time. But times are tough in our world. We have to pay these bills.

“The increase in the stamp cost will be felt most in a rural economy. People in small towns across America send checks through the mail to pay their bills. The stamp goes up and delivery goes down. I fear that just as economic hopes have started to rise for people returning to work, faith in the Postal Service’s ability to serve the nation will put a damper on commercial activity for many of us.

“At the same time,” Wesner said, “we have been warning our member newspapers for several years now that if Congress did not enact postal reform legislation, we would wind up exactly where we are today. It is not a recipe for success.”

Two months ago, USPS announced a slower delivery schedule and other changes in order to stabilize its finances following chronic deficits. Mail delivery has been sluggish since slowing down last year after DeJoy — in an effort to stop the financial bleeding — reduced overtime hours and extra trips by delivery trucks

“For the past 14 years, the Postal Service has had limited pricing authority to respond to changing market realities,” said DeJoy. “As part of our 10-year plan to achieve financial sustainability and service excellence, the Postal Service and the Board of Governors are committed to judiciously implementing a rational pricing approach that helps enable us to remain viable and competitive and offer reliable postal services that are among the most affordable in the world.”

In 2020, the Postal Service delivered approximately 129.2 billion pieces of mail and packages to customers located in every state and territory, county, city, town, and rural area in the nation.

Clark County Public Schools’ budget is looking better than it did a year ago when there was a $2 million... read more