Kentucky basketball could benefit from name, image and likeness changes 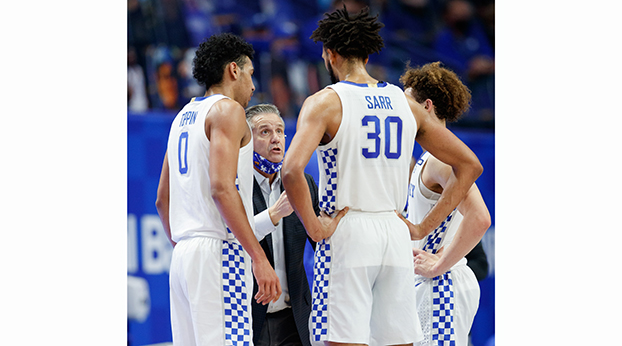 John Calipari sees a lot of things falling back into place for Kentucky basketball. (UK Athletics)

Finishing 9-16 last season is something Kentucky coach John Calipari says was still due to a variety of reasons, not just one particular shortcoming on his team or staff.

He insists his staff changes were not a reaction to the record but rather a chance for Tony Barbee to become a head coach at Central Michigan and Joel Justus to have more responsibilities at Arizona State.

He has admitted adding transfers Kellan Grady and CJ Frederick is part of a plan to space the floor more than what UK was able to do last season due to its lack of outside shooting.

However, what may change the future of Kentucky basketball more than coaching changes or adding shooters could be the upcoming name, image, and likeness legislation that will allow student-athletes to make money off their names. Calipari knows with the popularity of Kentucky basketball it could be a game-changer for the UK program.

“Obviously, we have to wait to see exactly what the rules state. But no one should be able to do it better for men’s basketball than our program,” Calipari said.

“Two years ago, TV-wise, our ratings before the pandemic would have ranked fourth in the NBA –- Golden State, the Lakers, Cleveland with LeBron (James) -– would have been above our ratings,” Calipari said. “So all the social media stuff and all the stuff we do, and we can do, in my mind, it should be the best in the country.”

Calipari said what he calls the “Kentucky Effect” already results in more shoe contracts and endorsement money for former UK players in the NBA.

That’s why he says the name, image, and likeness revenue for athletes should position Kentucky to combat money the G-League or other leagues trying to convince high school players to turn professional can offer.

“You may name a player that went to college, and I say to you if he went to one of the pro leagues, what would it have done for him? Now they say, ‘We’re going to build it.’ Well, I’m talking right now. Maybe in five years it’s different, but it isn’t right now,” Calipari said.

“Yes, kids are going to do it. Yes, and I’m fine with it. There may be kids that I’ve encouraged to do it. But the others that want this, we’ll be fine.”

Calipari did admit Kentucky is often going to be recruiting the same high-level players that the G-League and others are going after now.

He also believes a return to normalcy will again give him a chance to show players how important Kentucky basketball is to fans across the state.

He learned last year when UK could not do satellite camps across the state how much not being able to do those hurt the program.

“We’re going to take the team in groups to different parts of the state for some community work just to touch people for both the state of Kentucky, but I want these players to realize the impact that they have in our state,” Calipari said.

“You understand that this is important to our state and if it’s about bringing people together, doing things to make a difference for people’s lives, not trying to separate. The second piece of this is the camps that we get the satellite camps. I never realized how it gave our kids a chance to touch other young kids and have them see their importance, but also to be able to get into more different communities and see it.”

That’s another plus that Calipari says the Kentucky basketball program has that other programs do not and why he’s convinced last year’s fiasco will not be repeated.

“However it happens we will make it work,” Calipari said. “No one is hurt by sacrificing. Matter of fact, you are helped. I hope to get back to practices where NBA scouts are at practice. That brings up the level of practice. Let’s get back to who we are, what we are about.

“I may try some stuff (next year) and it doesn’t work. You pivot and move and try something else.”