Get a ‘Clue’ at Pioneer Playhouse 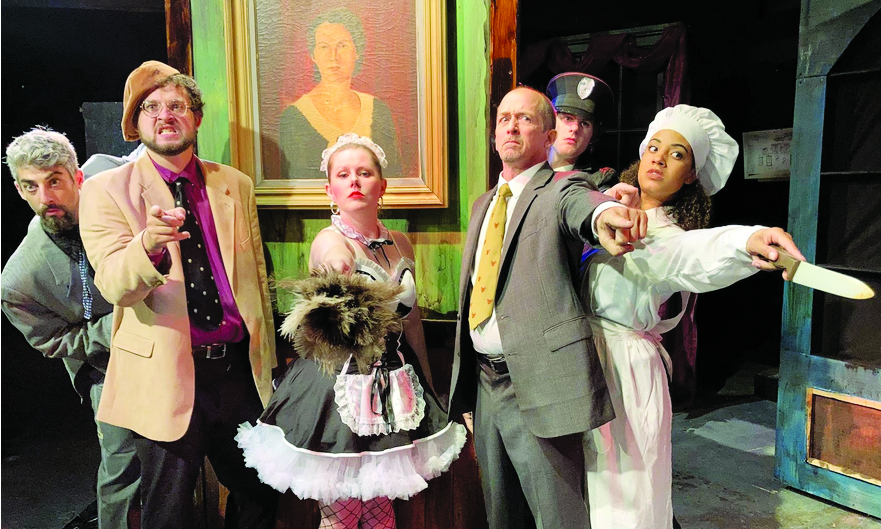 By Bill McCann
Pioneer Playhouse opened its 72nd season with the zany play Clue: On Stage. Based on the popular board game and the cult classic film –which starred Tim Curry, Madeline Kahn, Lesley Ann Warren, Eileen Brennan, and Christopher Lloyd—the play is performed under the stars in Danville by a cast that includes Playhouse favorites Patricia Hammond and Daniel Hall Kuhn. The play continues to play Tuesday through Sunday evenings beginning at 8:30 through July 3.
A home-cooked BBQ dinner is available before the show at 7:00 pm in the outdoor courtyard. Dinner and show is $35 per person; Show only is $20. Pioneer Playhouse is located at 840 Stanford Road in Danville, Kentucky.
“We’re so happy to be back to doing a full season,” says artistic director, Robby Henson, son of Col. Eben C. Henson, founder of Kentucky’s oldest outdoor theatre. “Last year we had an abbreviated season, but this year, we’re back in full swing.”
Rehearsals on the historic stage have been underway since Memorial Day weekend.
“To say that Clue is a complicated show, is a big understatement,” adds Robby Henson, who is the show’s director. “We read this fairly new stage adaptation, and we just knew it was perfect for the Playhouse; lots of energy, lots of mistaken identity, lots of silly characters running around trying to figure out what’s going on and who’s the murderer.”
“My dad built a huge outdoor amphitheater and dining patio, and it’s the reason we were able to open for a short season last summer; it’s the reason we’re confident about opening for a full season this year,” Robby says.
The theatre’s managing director, Heather Henson said, “We’ve been doing theatre outside and under the stars for 72 years, and we’re still going strong, even during a pandemic; I guess we’re doing something right!”
However, in a concession to the fact that the pandemic still lurks, there is one policy change. In the event of rain, the show will not be moved indoors, instead, local patrons will be offered rain checks and all other patrons will be given refunds.
A full schedule of this season’s plays and events can be found at pioneerplayhouse.com or by calling the box office at 859-236-2747.