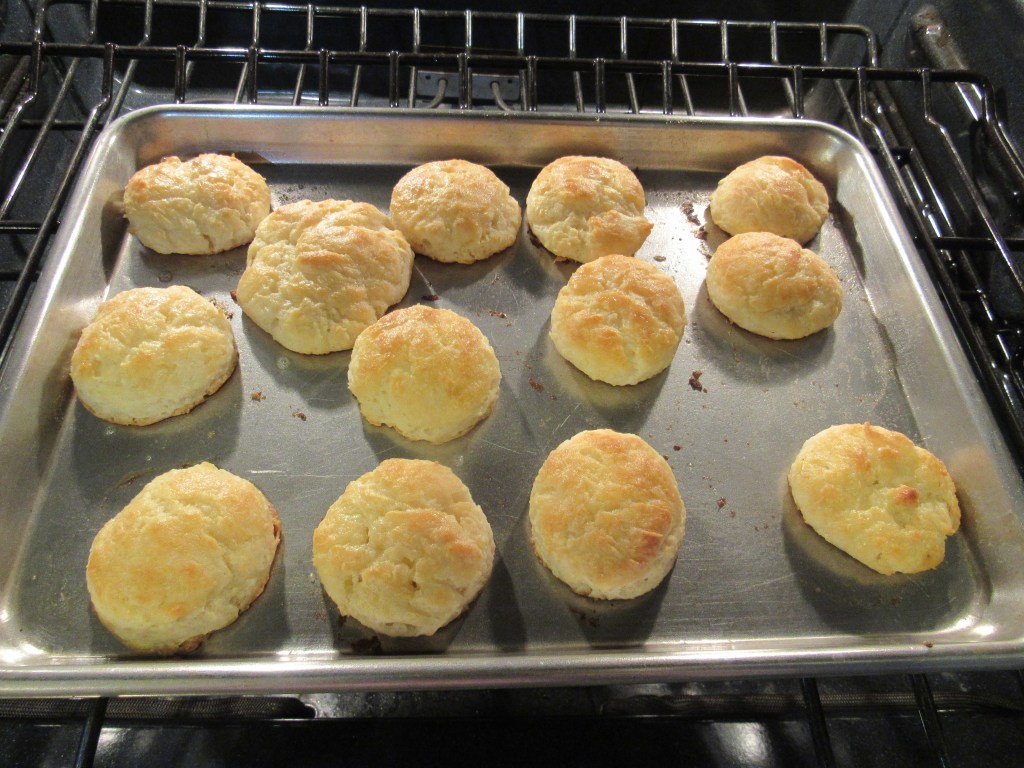 By Sarah Condley
• 1 cup butter or margarine
• 4 cups self-rising flour
• 1 1/2 cups buttermilk
• 1/4 cup butter or margarine
• Cut 1 cup butter into the flour with a pastry blender or fork until crumbly; add buttermilk, stirring until dry ingredients are moistened.
• Turn dough out onto a lightly floured surface; knead 3 to 5 times.
• Pat or roll dough to 1/2-inch thickness, and cut with a 2-inch round cutter. Place dough on lightly greased baking sheets.
• Reroll excess dough and proceed as directed.
• Bake at 425 degrees for 10 to 13 minutes or until golden. Brush with 1/4 cup melted butter.
• Makes about 5 dozen

Growing up my grandfather made the best biscuits ever. They were tiny and flat. After he passed away, we could not find his biscuit cutter; I think he must have used a 6-ounce frozen juice container for his biscuits. Maybe that’s why I don’t like big fat biscuits, but I do like little flat ones. When I ran across this recipe I’m sure miniature is what caught my eye. I don’t know where the recipe came from, I’d written it down on a piece of paper and stashed it away for a later date. After holding on to this recipe for a long time I finally decided to try making them to see if they were like Pa Floyd’s.
Brad and I like bread and could eat it with every meal. But I only make it occasionally because if it’s around the house, well, I’m going to eat it.
This recipe makes 5 dozen biscuits and that’s way too many biscuits for two people for a meal so I decided I’d make just 1/4 of the recipe. I don’t typically use self-rising flour so I didn’t have any in the cupboard, but you can make it by combing 1 cup of all-purpose flour, 1 1/2 teaspoons baking powder, and 1/4 teaspoon of salt. Then just measure out what you need.
To get started on these biscuits I made the self-rising flour then cubed cold butter into the flour. Cold butter makes better biscuits and it’s ideal for baked goods that should be crisp. Since butter is about 18 percent water, steam is released in those pockets during baking, which helps create flaky layers. (Those facts are brought to you by chatelaine.com). I used my fingers to start combining the two ingredients and then switched to a pastry blender just until the mixture resembled crumbs. Don’t overdo it. I poured in the buttermilk and gently tossed it with a spoon. As soon as there was a lumpy dough, I scrapped the mixture out onto my floured countertop. I kneaded the dough 5 times and then patted the dough to about 1/2 inch thick.
I cut the dough with a 2-inch biscuit cutter and placed the rounds on a greased baking sheet and ended up with 12 biscuits. I brushed the tops with melted butter and, because it wasn’t quite time for supper, I slipped the tray into the refrigerator so the butter in the dough would stay cold.
When it was almost time for our meal, I pulled the biscuits from the refrigerator and put them in my preheated oven. I set the timer for 13 minutes and waited. The biscuits weren’t rising and they were not turning brown. I had no choice but to let them continue to bake. I wondered if putting them in the refrigerator had anything to do with them not baking within the time frame. Then I looked at the recipe again. It said to brush the melted butter on AFTER they come out of the oven. After about 7 more minutes in the oven, the biscuits were a light brown. I took them out of the oven and we sat down at the table.
Brad blessed the food and then I buttered my flat biscuits. They had a good flavor and I liked that they were flat. Which reminded me of my grandfather’s biscuits. However, they were much bigger around than his.
A couple of days later I told Brad I was going to make these biscuits again, but this time I was going to wait and brush them with butter when they came out of the oven. That night I started the process all over again but I did not place them in the refrigerator and did not brush melted butter on the raw dough. The biscuits went into the oven and after about 13 minutes they were a pretty brown color. When they came out of the oven, I brushed the tops with butter and we began eating after our prayer.
The flavor of the biscuits was the same as the first time, but they were more appealing this time. And I ended up with 13 instead of 12 (they must have been a little flatter.)
This recipe for homemade biscuits is pretty good, but they weren’t exactly like my Pa Floyd’s. Maybe I need a smaller biscuit cutter.
I’ll call this recipe a Nailed It and I’ll hold on to it until I find another recipe for biscuits that I like better.