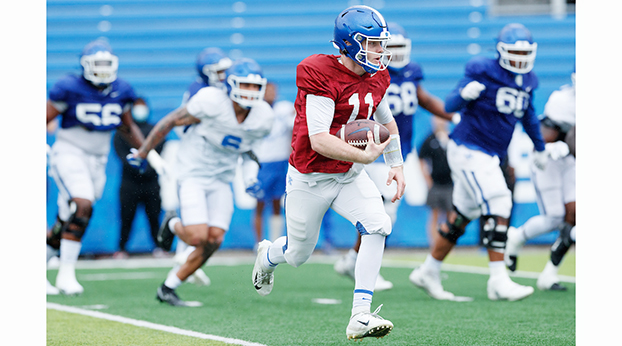 Even though he did not come out of spring practice as Kentucky’s No. 1 quarterback, redshirt freshman Beau Allen thought everything went well not only for him but the entire team.

Allen especially enjoyed having a chance to work with and get to know new offensive coordinator Liam Coen.

“I love coach Coen. He is a great guy. I learned a lot about football and probably even more that was not about football,” Allen said. “He can handle things extremely well and he can get guys to rally around him. I love him a lot.”

Allen figures to be part of a three-way battle for the starting quarterback position along with Joey Gatewood and Penn State transfer Will Levis. Coen has said he won’t pick a starter until preseason camp gets underway.

The former Lexington Catholic standout said that made spring practice both challenging and fun.

“We had a lot of fun times and a lot of challenging times. We would start hot, finish slow or start slow and finish strong. Practice went all kinds of ways but people had fun,” Allen said. “We got better. It was both a struggle and fun. I can’t wait for more of it and the rest of the team feels the same.”

Not having anything settled at quarterback is not intimidating or discouraging to Allen, a prolific high school passer who played only sparingly last season. Allen says it is “inspiring and motivating” knowing he’s part of a three-way quarterback competition.

“Me, Joey, and Will will all compete. I know we will all be grinding as hard as we can just like everybody on the whole team. Everybody is going to be battling for spots. It is going to be fun,” Allen said.

“Everybody has a great opportunity to be the best player they can be. I think we are all going to grind, have fun and the best outcome will happen.”