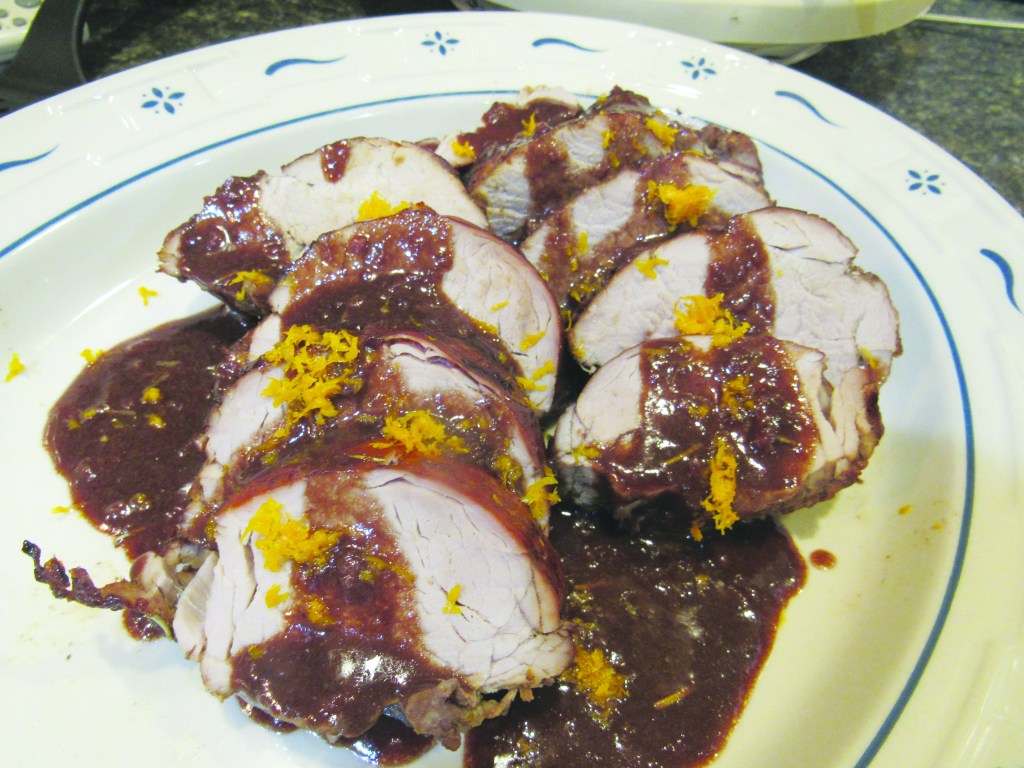 It was obvious I’d torn this recipe from some magazine; however, I have no idea which one. The recipe had been submitted by Sharon Stillman of Mequon, Wisconsin in 2009.
Pork tenderloin is so good and much more tender than a pork loin. I buy them when they are on sale and can cut them in half and stash them in the freezer. Half of one is more than enough for the two of us to have for a meal. I laid a package of the tenderloin out to thaw and went to the grocery store to pick up an orange, among other things. Even though I have seedless blackberry preserves in the freezer, from our wild blackberry bushes, I looked at jarred jam at the grocery. It was more than I wanted to spend since I just needed 1/4 of a cup.

Once home from my little shopping trip I went to the freezer and got a small jar of blackberry freezer jam out and let it soften. When I could scoop out 1/4 cup, I added it and the rest of the marinade ingredients to a gallon zipper type bag. Now the recipe said to melt the jam but that wasn’t necessary since my jam wasn’t overly thick. Once all the ingredients were in the bag, I massaged it with my hands to combine everything then put the thawed pork into the bag. Since the meat needed to marinade for several hours, I placed it in a bowl, in case the bag had a leak, and then put it in the refrigerator. Several times that afternoon I turned the meat in the bag and massaged it as I turned it.
When it was time to start preparing supper, I removed the pork from the bag and put it on a rack on one of my cookie sheets. I used a cookie sheet pan because the rack would not fit into any of my baking dishes. I put the pork tenderloin into the oven and set the timer for 45 minutes. I like my meat well done and I was skeptical that 45 minutes would be long enough for this to cook.

While the meat was in the oven, I poured the remaining marinade into a small sauce pan and brought it to a boil then let it simmer for at least 5 minutes. It thickened up a bit and then I turned the burner off.

When the oven timer sounded I stuck a meat thermometer into the pork and it registered over 155 degrees. Just to be sure it was done enough for us, I cut a slit into the thickest part of it and I could hardly believe my eyes. There was no pink and we were ready to eat.

I removed the pork from the oven and let it rest while I got everything else for our meal on the table. I sliced the tenderloin and poured the marinade over the slices then sprinkled a little of the remaining orange zest over the dish. It looked kind of pretty even if I did say so myself.

Brad blessed the food and we started eating. Brad doesn’t care for rosemary and I didn’t tell him there was some in this dish. Half way through the meal I asked what he thought of the meat. He said it was OK, but he wasn’t crazy about it. He said it had a lot of orange in it, but he did like how tender the meat was. At that point I told him it had rosemary in it and he said he could taste it but didn’t think it was overpowering. I’ll say I thought there was way too much orange flavor too, so I scraped the added orange peel off the remaining pieces of tenderloin and that seemed to help.

There was enough pork tenderloin left over so we could have it again, reheated. The next night the rosemary was more intense and I was surprised. I asked Brad if he’d want this dish again and he said “No.”

Even though this dish was okay and I Nailed preparing it. It won’t be added to my self made cook book because of the rosemary and too much orange. But we did enjoy the remaining blackberry freezer jam on those mini buttermilk biscuits I told you about.