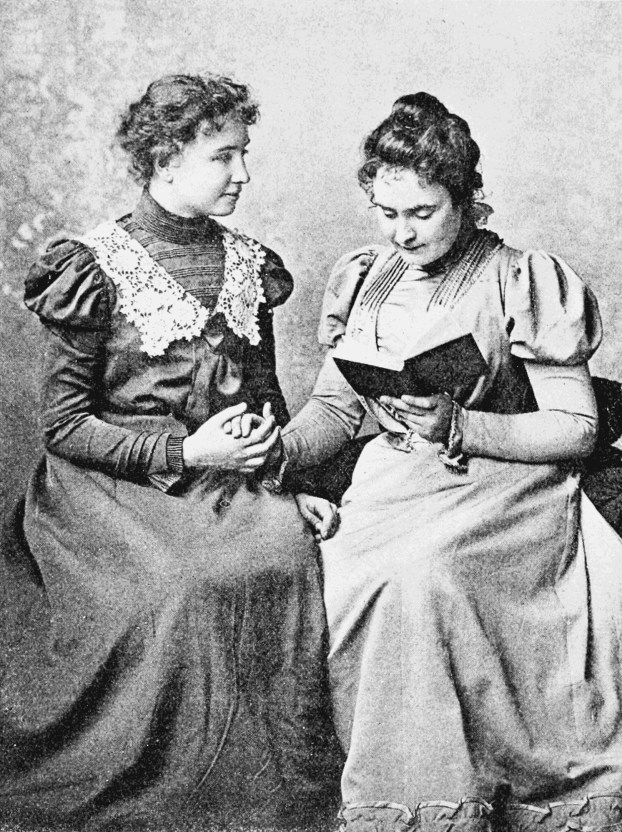 Helen Keller (left) and Anne Sullivan, circa 1899. The photograph was taken by Alexander Graham Bell.

WHERE IN THE WORLD?: Helen Keller

By Harry Enoch
Columnist
The year 1916 was marked by a number of historic events. Two of the most decisive battles of World War I were fought in France—at Verdun and the Somme; Albert Einstein completed his general theory of relativity; Babe Ruth led the Boston Red Sox to a World Series title; Charlie Chaplin began his brilliant movie career with Mutual Studio; and Helen Keller, world famous author, lecturer, and crusader for the handicapped came to speak in Winchester.

Helen Keller (1880-1968) was born in West Tuscumbia, Alabama. When nineteen months old, she contracted an unknown illness that left her blind and deaf. She learned to communicate with her family by hand signals. Her parents sought professional help for Helen and, through the assistance of Alexander Graham Bell, were able to engage 20-year-old Anne Sullivan as Helen’s instructor. It would prove to be the perfect choice.

In 1903 Helen published her autobiography, The Story of My Life, which catapulted her to worldwide fame. The book later became the subject of a Broadway play and Oscar-winning movie, “The Miracle Worker.” Helen eventually published twelve books and gave countless speeches in the U.S. and in dozens of countries.

In January 1916 the Winchester Sun announced, “Miss Helen Keller and Mrs. Macy will lecture at the Winchester Operahouse on February 19 at 8 o’clock p.m.” (Anne Sullivan had married John Macy by that time.) It was touted as “the biggest event our little city will have during the year.” Tickets were to go to Clark County residents first, then to other towns if not all were sold. The price of tickets was one dollar, half price for students and twenty-five cents for seats in the gallery.

The engagement, an unexpected coup for Winchester, came about through the efforts of Professor Walter H. Moore of Kentucky Wesleyan College. A Kentucky native and alumnus of the college, Professor Moore would go on to obtain a Doctor of Divinity degree from Emory University. He spent many years in Brazil as a Methodist missionary, president of Granberry College and head of the Methodist Seminary in Sao Paulo.

The Sun reported regularly on ticket sales, which were made available at Strode’s Drug Store, 68 S. Main St. By February 11, “less than 20 seats had not been engaged.” The Opera House was said to seat 462.

The following week the paper announced that three rows in the gallery were available for reservations, a total of 172 seats. After those seats were sold, it would be standing room only.

Miss Loma Byrd, a senior at Clark County High School, won a prize for the best Helen Keller essay, which was published in the paper.

Saturday night “every seat on the lower floor was taken and the gallery was crowded.” The audience included visitors from Lexington, Richmond, Mt. Sterling, Paris, North Middletown and Cynthiana.

Due to the Cincinnati train running late, the program was delayed until 9 o’clock. President Clark of Wesleyan introduced Mrs. Macy, who gave an account of Helen’s early life through her graduation from Radcliff, where Helen studied German, French, Latin history, philosophy and mathematics. Helen then gave an inspirational speech, “which could be heard in all parts of the house.” Following the speech, she answered questions from the audience—“some of them were humorous showing quick wit and an insight to human nature.” Not surprisingly, her visit was covered in all the area newspapers.

Helen Keller is remembered as a passionate activist for people with disabilities. Her organization, Helen Keller International, was devoted to research in vision, health and nutrition. In 1920 she helped found the American Civil Liberties Union. In 1964 President Lyndon Johnson awarded her the Presidential Medal of Freedom.

Helen died at her home in Connecticut and is buried at the Washington National Cathedral. She lies beside her constant companion, Anne Sullivan Macy.

Thanks to Nancy Turner for suggesting the topic for this story.