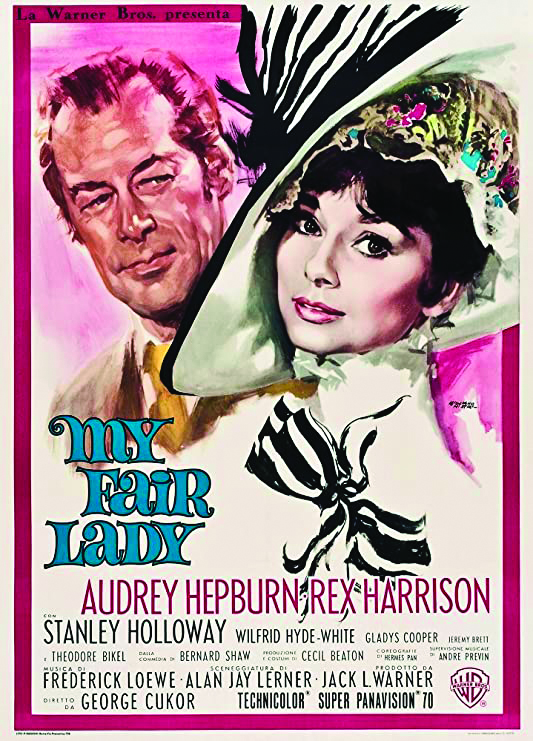 Your voice is your calling card. Your speaking pattern, accent and style are more important than you think. In our digital age of texting and social media posting, the elementary rules of spelling, proper usage, tense which a majority of us where schooled in have fallen to the wayside in favor of brief blasts of modern vernacular that at times hinders the appearance of our potential intellect. When we modulate, the sound, style, and words we choose to use projects an impression of who and what we are. Unfortunately, without the proper schooling on the essentials of what and what not to say and how to say or not to say it, we can be our own worst enemy. The importance of quality speaking skills and how it makes or breaks an individual in society is best on display in the award-winning musical winning “My Fair Lady” (1964).

Arrogant English phonetics professor Henry Higgins (Rex “Doctor Doolittle” Harrison) is so sure of his abilities and boasts to fellow professional phonetics fanatic Colonel Pickering (Wilfrid “The Toy” Hyde-White) that he can work his magic by transforming a poor, flower selling Cockney gal, Eliza Doolittle (Audrey “Breakfast at Tiffany’s” Hepburn) into a lady who can pass for a duchess amongst cultured members of a high society ball within six months. Eliza agrees to speech lessons in hopes to improve her job prospects and rise on the social ladder in stuffy ole England. The storming, forming, and norming stages of educational dynamics ensue as Henry and Eliza develop a close bond which becomes threatened by an aristocratic suitor Freddy (Jeremy ”War and Peace” Brett) as she begins to be noticed as her education flourishes like the flowers she once sold.

“My Fair Lady” was directed by George “The Philadelphia Story” Cukor with a screenplay by Alan Jay “Paint Your Wagon” Lerner adapted from the 1956 Broadway musical based off George Bernard Shaw 1913 play “Pygmalion.” Upon its cinematic release, “My Fair Lady” was a success and has matured over the years as a classic must see and is a joyful Technicolor delight which may be enjoyed by even the stuffiest antimusical curmudgeon. In recent years, “My Fair Lady” has been a source of inspiration for films such as modern teen comedy, “She’s All That” (1999) and the upcoming Netflix August 2021 release, “He’s All That” and countless stage reproductions over the years. The diamond in the rough plot is nothing new to stage, film, or life, but “My Fair Lady” exemplifies the standard for this popular trope.

As you venture through the day and interact face to face or digitally, remember that the manner of your speech does in fact lead to success or your fall from social grace. Sharpen your phonetic swords everyday as you do battle through the challenges of your day by showing great discipline and awareness that your word usage and tone are vital to your success.

“My Fair Lady” will be screened Sunday June 13 and Wednesday June 16 at the Regal in Hamburg and Cinemark at the Fayette Mall with showtimes at 1PM and 6PM presented by Fathom Events.
The rain in Spain stays mainly in the plain, and have a film-tastic day!

Some summer arts activities and camps

BY BILL McCANN Arts Columnist Summer theater Kentucky Shakespeare, based in Louisville, is touring performances of “Romeo and Juliet” to ... read more