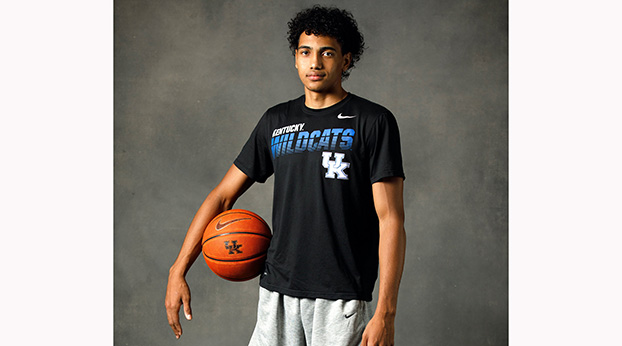 UK’s Jacob Toppin is growing and playing with confidence in preparation for next season. - UK Athletics Photo

“I definitely think I grew like an inch,” he said. “I came back and (coach John Calipari) looked at me and said, ‘ ‘Whoa! Did you grow?’ I was standing next to my brother (Obi) and I’m like right there and a little bit taller. I’m definitely growing a little bit more.”

Toppin and some teammates have been circling across the state during the past two weeks as part of the Wildcats’ satellite camp tour.

“Being at this camp is very fun,” Toppin said. “I love interacting with everyone, especially the kids. The kids enjoy having us around and I enjoy having them around. It’s definitely a fun experience.”

During a return home last month, Toppin has been working on improving his game, especially his outside shooting.

The younger brother of New York Knicks forward Obi Toppin, Jacob is trying to reach his brother’s status as one of the best players on the court.

“(I) think I have the confidence in myself that I can be better than him,” Toppin said. “Right now, I’m probably not, but I can definitely be better than my brother.”

Toppin said his style is different than his brother and his personal goal is to surpass his brother’s skill level and added that he’s “been putting in the work and I’m building my confidence.”

“We have two different styles,” Toppin said. “I think I can shoot a little bit better, I can score off the dribble more and I can play defense. I can play both sides of the court. I think, as time goes by, I will be better than him. He probably thinks he’s better than me. There is always a competition between us.”

In his first season with the Wildcats, Toppin said it took a while to adjust to the system.

“Mentally I wasn’t there,” he said. “(Now) I’m shooting the ball, I’m getting more confidence in myself and more consistency. The more consistency I have, the better (and) I’m going to shoot the ball.”

Toppin likes the makeup of the current squad and has been impressed with the talent Calipari and his staff have assembled.

“It’s going to take some time to build that connection and build that trust with one another, to play better, but I think we’ll be good,” he said. “We’re all meshing well right now, but as time goes on, as we play more together, we will get that connection.”

Once that happens, Toppin is predicting great things will happen in the future.

“I’m excited for new things and new people to come along,” he said. “We’ve played pick-up (games) already and I’m excited to play with these guys. I think it’s going to be something special.”

John Calipari put an end to the rumors nearly as soon as they began. The Kentucky coach responded to a... read more