Are you television material? 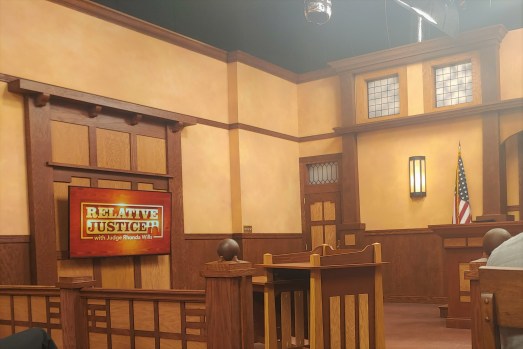 This image shows the set of the television show Relative Justice.

Ever wanted to be on television? Oh, I don’t mean to be seen answering the phones for a KET fundraising telethon, or answering the questions of a reporter whose name you won’t remember five minutes later. I mean a real honest-to-goodness television show. In this instance, the show is a soon to debut courtroom drama called Relative Justice.

A syndicated television show along the lines of Divorce Court or Judge Joe Brown, Relative Justice is set to debut sometime this fall. The show is being filmed in Lexington in recently constructed studios at what was once the Cinemark 10 Cinema in the Woodhill Shopping Center.

Relative Justice, produced by Lexington-based Wrigley Media Group, will begin with 150 original half-hour episodes all filmed in Lexington. Though litigants come from up and down the East Coast– from New York to Georgia, at least some will be from Kentucky. The show is the first nationally syndicated TV show to be taped in Kentucky.

Relative Justice Executive Producer, and Wrigley Media’s Chief Content Officer, Ross Babbit stated, “We’re very excited to bring this show to a national audience. There is nothing more relatable than a family squabble and Judge Rhonda Wills will bring her own unique style to adjudicating a wide variety of entertaining cases.”

The show is executive produced by Lou Dennig, an Emmy nominated television producer who has been involved with some of the most successful court shows in television
history. Dennig was instrumental in launching Judge Judy, and produced Judge Joe Brown, Swift Justice with Nancy Grace, Divorce Court, The High Court, Personal Injury Court as well as various podcasts and pilots in the court genre.

For those interested in doing more than reading about the show there are opportunities to participate. Specifically, the show needs an audience, “Gallery members” and litigants—plaintiffs and defendants. Gallery members watch shows and react to what they see. Depending on what is happening or said Gallery members may boo, clap gently (or long and loud), do eye rolls, sit on the edge of their seats, laugh, and just generally make their responses to what is going on known.

Being in the gallery was a day-long adventure as we sat through the filming of nine cases each day. In fact it was fun enough that I did it twice. Each day began with “Lou” coming out and acting as a warm up act who got people revved up and ready to go. He warned us not to discuss individual cases or outcomes. But he did want us to tell friends and family of the fun we had and to encourage them to either apply to be in the Gallery or to be a litigant.

Those wishing to be Gallery members can apply on the Wrigley Media website by going to: https://relativejustice.tv/audience-signup.html Signing up is easy. You’ll be asked for your name, email address and phone number. There is also space for you to explain why you should be chosen to be in the audience.

Individuals interested in being a litigant can get more information and apply to have their case heard by Judge Rhonda Wills by calling 833-55-COURT or visiting relativejustice.tv for more info. Keep in mind that every case must involve family members. An uncle who is owed money by a niece. Or perhaps a god child owed money by a godmother.

Stacy Luchs, national media contact for the show, explained, “the show is family driven.” Cases are instances of Judge Rhonda, “trying to resolve issues and put things right.”
Among the Gallery members I met on set were Joe Deuce, a regionally-known stand up comic who performs regularly at Comedy Off Broadway and will be appearing at Danville’s Pioneer Playhouse August 7 and 8, who said, “The cases were entertaining, the crew was fun to be around and it was fun to be able to see some behind the scenes of what goes on on those court shows. I am hopeful that this is just the start of several productions coming to our area and I hope to be involved in others.”

Another audience member was Alana Ghent, on faculty at EKU, who said, “ I’m not a huge reality TV fan. I think I just over-empathize. So it was interesting to see it in production. I kept being torn between getting caught up in the stories and trying to respond as an audience member. And I wanted to know more about the plaintiffs/defendants- and ask questions to get to the details of the problems. So…it was challenging and fun.”

Bill McCann is a playwright and the author of the Arts Filled Life a blog that can be found at www.whmccann.com where you may also find some of his other writings and previous arts columns.