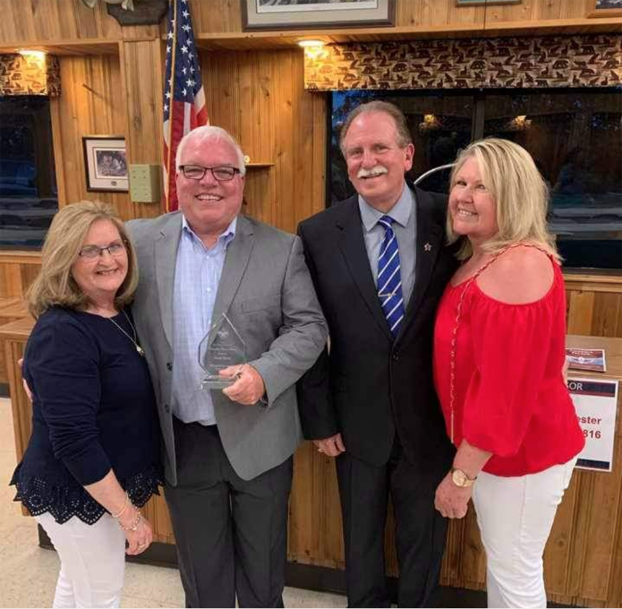 With their spouses, Frank Doyle (left) and Berl Perdue (right) pose for a photo at the Clark County Fish and Game Club. – Photo submitted

“I’ve spent my entire life in this community, and it’s always been a pleasure to serve it,” reflected Clark County Jailer Frank Doyle. “It was a great feeling to be honored by the Boy Scouts and by the people. We had a packed house and a good crowd. That always makes you feel wonderful.”

On the night of Thursday, June 17, Doyle was presented the Boy Scouts Distinguished Citizen Award and the key to the city of Winchester at the Clark County Fish and Game Club. He was honored for his service as jailer since 2015, as well as his other lifelong contributions to Winchester. Doyle says he never expected such an honor.

“I’ve gained life experiences more than anything throughout my career. I always try to keep in mind – whether it’s an employee or an inmate, the people you deal with are someone’s family. You always try to deal with them pleasantly and respectfully. I feel as long as you treat people in a manner you want to be treated, it works itself out,” Doyle surmised.

Doyle’s contribution to the Winchester community dates back farther than his time as jailer. From the 1970s up until 1997, he was an officer with the Winchester police.

“Being in the police teaches you things to look for, watch for, how to greet people, how to communicate with people. That was a big asset to my career,” Doyle said.

Going forward, Doyle hopes the Covid situation will calm down enough for the detention center to resume its community programs at normal capacity. These services include educational programs, church groups and city cleanup.

In addition, Doyle has the ambition to make the cost of the detention center easier on taxpayers.

“Our main thing is trying to get the jail to where it’s financially stable,” he said. “A county inmate costs you and I the tax payers’ money. You’re paying their three meals a day, their medical and anything else. But with state or federal inmates, they produce income that can offset part of that cost.”

When housing an inmate for a larger government, Doyle explained that detention centers are paid by the state for each day they house that inmate. Doyle aims to reduce taxpayer cost by balancing state and local inmates.