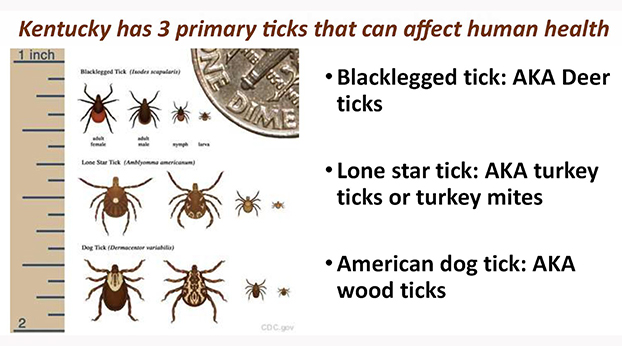 Some Kentuckians say ticks are worse than ever

Some Kentuckians are saying ticks are more plentiful than ever this year. Some states are having one of their worst tick seasons ever, but it’s too soon to declare that definitively for Kentucky, largely because the state has only been doing tick surveillance for about three years.

“In a couple more years, [we’ll] have a clear understanding of how ticks and tick-borne disease dynamics are shifting and changing through time so that we can understand how to best protect the public and understand what kind of diseases are of concern and how to best control ticks,” said Anna Pasternak, a graduate researcher of ticks at the University of Kentucky.

Pasternak is part of the Kentucky Tick Surveillance Program, which has been collecting information on ticks in the state since January 2019.

That said, Kentucky provides a perfect home for ticks, with its warm, humid summer days, an abundance of wooded, leafy areas in both rural and urban places, and plenty of hosts to feast upon, she said. And though they are most prevalent in the summer, in Kentucky, she said, “It’s always tick season.”

Kacy Tongate of Lebanon Junction told Alexis Mathews of Louisville’s WLKY-TV in May that he thought ticks are worse than usual this year and one had given him Rocky Mountain spotted fever.

“We can walk to the mailbox down the gravel driveway and come back with ticks on us,” said Tongate. “They fall out of the trees, they’re in the grass; they just keep getting worse every year, it seems.”

Pasternak said the best way to minimize your risk for tick-borne disease is prevention, which includes things like spaying your clothes, shoes, socks and hats with an insect repellent like Permethrin before heading outdoors, and doing regular tick checks throughout the day.

“The first line of defense that you have against ticks and tick-borne disease is making sure they don’t get on you or your pets or children,” she said.

And if you do get bitten, she said it’s important to remove the tick properly, grasping it as close to the skin as possible with a pair of tweezers and pulling it straight out with gentle, even pressure.

She cautioned that an embedded tick will offer some resistance when you try to remove it, but it will let go after a few seconds. “You are much stronger than the tick,” she said.

She said many of the home remedies used to remove ticks end up agitating them, which causes it to vomit its gut contents, which is where the disease-causing agents reside, into your bloodstream. “You don’t want to speed up the disease process,” she said.

Pasternak also encouraged Kentuckians to take a picture of the tick or to save it in alcohol or nail-polish remover to help your health-care provider make a diagnosis if you have symptoms of a tick-borne illness. She said this is important, since symptoms may not show up for week after the initial bite.

Ways to protect yourself from ticks are:
• Avoid grassy, wooded and leaf-covered areas

• Keep grass and shrubs trimmed and cleared away

• Walk in the center of walking trails

• Wear light-colored clothes, which make it easier to spot ticks

• Wear long pants tucked into boots and tuck in your shirts

• Use tick repellent that has the repellent DEET or picaridin

• Treat your clothes with permethrin, which repels and kills ticks

• Check your pets and equipment for ticks

• Shower within two hours of potential exposure, if possible

Pasternak said you can run a lint roller over your clothes and exposed skin to locate very small ticks.

“The smaller ones, I think, pose a little more danger than the adults, because they are so small that a lot of people don’t notice them until they’ve been attached for a day or two,” she said.

Tick species and the diseases they carry
The most common tick-borne diseases in Kentucky are Rocky Mountain spotted fever, Lyme Disease and ehrlichiosis, which causes fever and muscle aches.

Reported cases of the diseases are relatively low in Kentucky, but Pasternak said, “There is a big issue with tick borne diseases being under-reported.”

In Kentucky, the American dog tick and the brown dog tick can carry and transmit the bacteria that causes Rocky Mountain spotted fever.

Signs and symptoms of RMSF are fever, headache, nausea, vomiting, stomach pain, muscle pain, lack of appetite and a spotted rash. The rash usually develops several days after the onset of a fever and can vary between splotches and smaller pinpoint dots.

The Lone Star tick caries the bacteria that causes ehrilichiosis.

Signs and symptoms of ehrilichiosis are fever, headache, chills, cough, malaise, muscle pain, nausea, vomiting, diarrhea, confusion and red eyes. A rash is common in children, but less so in adults.

The Lone Star tick is also a vector for alpha-gal syndrome, known as the red-meat allergy, which is becoming increasingly more common.

In Kentucky, the blacklegged tick, which is commonly called the deer tick, carries the bacteria that causes Lyme disease.

Signs and symptoms of Lyme disease include fever, chills, headache, fatigue, muscle and joint aches and swollen lymph glands. In addition, upwards of 80% of infected persons have a distinctive “bull’s eye” rash that appears at the site of the bite three to 30 days after infection.

A Centers for Disease Control and Prevention study released in February estimated that the average number of people diagnosed with Lyme each year in the U.S. in 2010-18 was 45 percent higher than those diagnosed in 2005-10. Kentucky reported 22 cases of Lyme disease to the CDC in 2019.

There 11,081 Kentuckians with currently active HIV cases, says the Kentucky Cabinet for Health and Family services in a 2020... read more