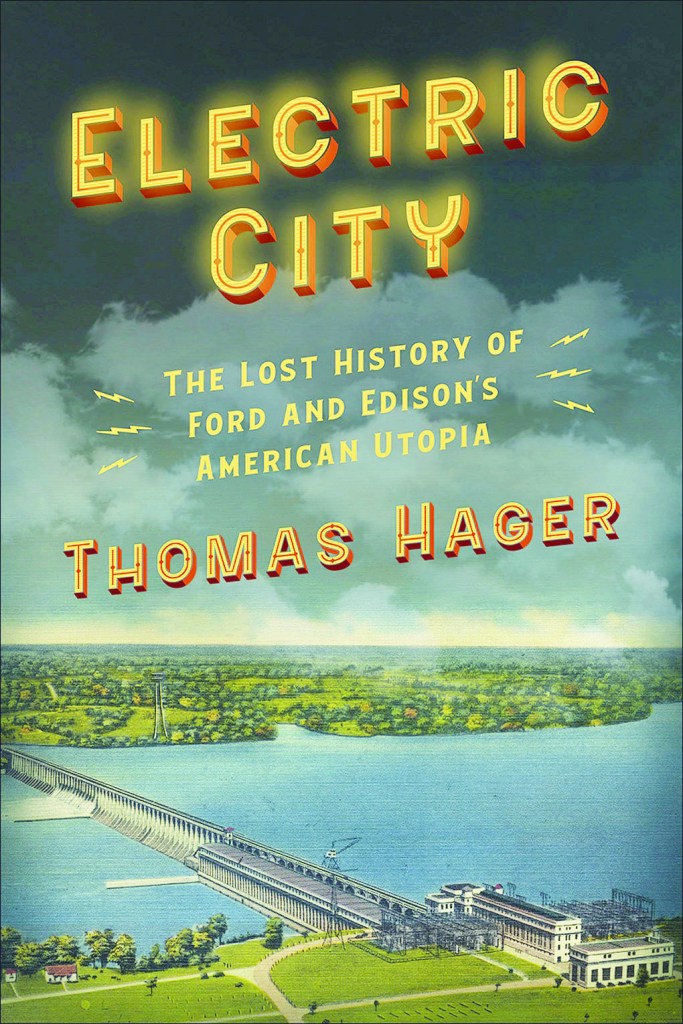 Three words you’ve been saying, out-loud or quietly to yourself, ever since you’ve been able to talk. Because, of course, you want things, treats, toys, and other accoutrements of humanness. You want them, and you won’t take “no” for an answer – even if, as in the new book “Electric City” by Thomas Hager, there are big hurdles.

If you can imagine a jagged, goofy smile from east to west across the top of Alabama, then you can envision the Tennessee River. It’s an area filled with welcome vistas but in the late 1700s, when settlers began showing interest in living along the bottom loop of the Tennessee, they were met by unwelcoming Natives. After Andrew Jackson removed those Natives from the area, called Muscle Shoals after the mussels found in its waters, he allowed development there.

Ninety years later, in 1921, Henry Ford was invited to take a look.

Just decades prior, Thomas Edison had stunned the world with electricity and the possibilities it offered, and developers wanted in on that. Two of them, Frank Washburn and J.W. Worthington, landed government support to build large dams across the Tennessee River – first, as electricity generators and secondly, to make nitrogen fertilizer for American farmers. Crews worked feverishly on the project until the end of World War I, when officials realized that new, better technology had already made its factories obsolete.

Muscle Shoals, as a project, was done.

Towns that sprung up to house factory workers disappeared and the government was stuck with buildings for which they had no use. Meanwhile, in Michigan, Henry Ford began construction on new facilities for Model T manufacturing; officials noticed and Ford was invited to view the Muscle Shoals compound, for which he shrewdly made a bid.

But it was a weak one, complete with half-promises and vague assurances – and Ford dug in his heels, convinced he’d win. Repeatedly given the chance to change his bid, he stood firm. Ford was a take-it-or-leave-it kind of guy.

And certain government officials were inclined toward the latter…

Tell your average toddler “no,” and you’d best be prepared to do battle in a dozen ways. They won’t go down quietly and neither did Henry Ford. Some may admire him for his perseverance, or for his vision, or read “Electric City,” and you might call it folly.

Or hubris, as author Thomas Hager shows in his account of Ford’s many attempts to prevail and the political contention that thwarted him and the utopia he foresaw. Hager tells of government officials and the public taking sides – and readers will, too, perhaps paralleling modern opinions on wealth and privilege. Hager writes tantalizingly of an early-twentieth-century President Ford, leaving us to imagine a big what-if, and he brings readers current.

So did Ford deserve to get his way? And was Edison, who seems to be a peripheral character in “Electric City,” really as supportive as he appeared at first? Find out by reading this fascinating, widely-sweeping slice of Americana. If you love history, yeah, you want that.