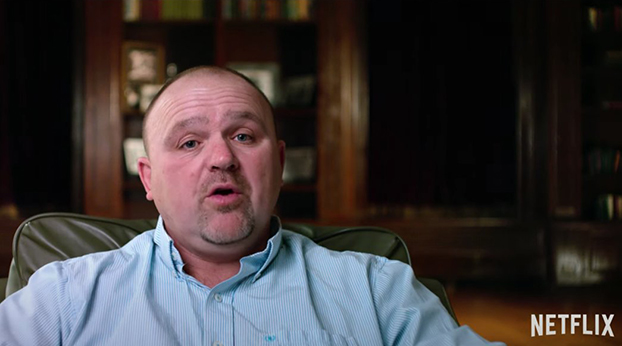 Toby Curtsinger is interviewed on the Netflix series "Heist" about the massive bourbon heist in Franklin County. The series airs July 14.

A massive bourbon theft in Franklin County a few years ago that received national and international attention is being revisited by Netflix.

The so-called “Pappygate” scandal, in which top-shelf Pappy Van Winkle bourbon and other brands valued at more than $100,000 was tied to a ring of employees-turned-thieves and distributors, is sharing the stage with two other high-profile theft cases on Netflix’s new documentary series “Heist.”

Netflix released a trailer for the series this week.

“Think about it,” Toby Curtsinger said in the trailer’s opening. “If you had an opportunity to steal, if you worked in a bank with a vault wide open and nobody seeing you, are you going to do it?”

A former loading dock worker at Buffalo Trace for 26 years, Curtsinger was originally sentenced in 2018 to 15 years in prison for his role in thefts from Buffalo Trace and Wild Turkey distilleries; shortly after, he was granted shock probation.

At the time, the case was called the largest bourbon heist in history.

Former Franklin County Sheriff Pat Melton, whose office investigated the case. was shown briefly during the trailer in an interview for the series.

“Golly, you can’t make this up,” Melton said.

“Heist” pairs Curtsinger’s story with a 21-year-old woman stealing $3 million in Vegas casino cash and a man stealing a “fortune” from a Miami airport.

The series is set to premiere on July 14.

$1,500 incentive offered to get unemployed back to work