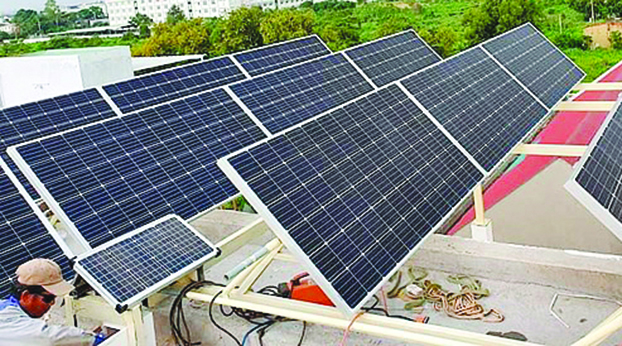 Clark County residents have been given a survey to collect opinions on the use of solar energy. - Photo courtesy of Wikimedia Commons

Clark County residents were sent a survey regarding the implementation of solar panels in the county, and the results are in.

When asked “Do you favor or oppose allowing industrial-scale solar facilities in Clark County’s agricultural zone,” 61 percent of the 1,335 who participated in the survey opposed that notion. Twenty-five percent were in favor, while 14 percent remain unsure.

The survey was conducted by the Matrix Group, with the president and CEO, Martha DeReamer, relaying the results to the Clark County Fiscal Court Thursday, June 24.

From March 13 through May 27, a total of 15,760 surveys were sent out to residential addresses and post office boxes in the Clark County area. While the aforementioned 1,335 who completed the survey is just a fraction of the surveys sent out, DeReamer explained that this ratio of participants is common with surveys such as this one. She added that those who respond to surveys tend to be the most passionate about the issues they regard.

In addition to examining the percentage of those who are for and against the introduction of solar panels, additional background information was collected from the participants to add further context to these results.

Participants were asked how important they considered the issues of farmland preservation, property value, job creation, and development. The results for these questions returned as follows:
• Farmland preservation; green space and scenic rural roads were deemed important by 94 percent.

• Encouraging development where infrastructure exists was deemed important by 83 percent.

When asked “Where do you favor locating solar energy systems in Winchester-Clark County,” the results were:
• Rooftops at 64 percent.

• In all zoning districts at 15 percent.

These surveys are part of an ongoing discussion since June of 2020, where Clark County Fiscal Court urged the planning and zoning commission to consider amending zoning ordinances to include solar energy. While many do not oppose the use of solar panels, several within that demographic are against the conversion of Clark County farmland into solar energy facilities.

Discussion on this topic remains ongoing.