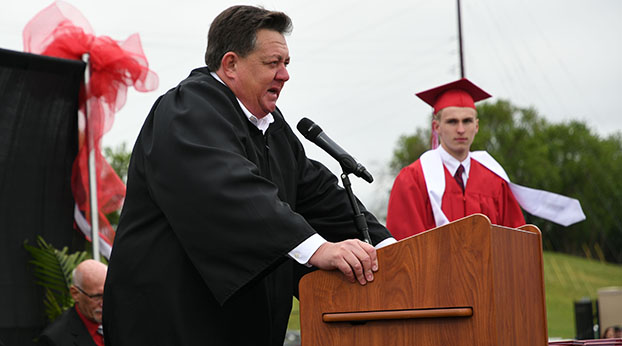 David Bolen declares the Class of 2021 official GRC graduates in his final time at the commencement podium. 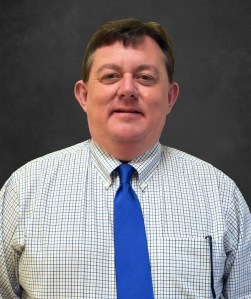 David Bolen may have physically left the eastern Kentucky mountains 14 years ago, but their spirit of strength, resilience, and individuality stuck with him.

With these qualities and a creative vision, this country boy from Knott County transformed GRC after being hired as head principal in 2010.

Leading GRC to unprecedented academic heights and overseeing the transition to a swanky new total campus are certainly feats not many can claim.

Bolen leaves the school poised for continued success when he retires June 30th after 11 years, the longest tenure of any head principal since the school opened in 1963.

“It’s kind of bittersweet,” he says. “Eleven years is a long time. I kind of pride myself knowing that I outlasted a heck of a lot of principals.

The people here are my family and they’ll always be my family. It’s hard to let go of that, but life is about change. The hardest part is saying ‘Goodbye’ to what has been my life for 11 years.”

Bolen remembers when he knew it was time.

In March of 2020, GRC was riding high. Fresh off girls and boys district and region basketball championships and pending trips to the Sweet 16, along with all the excitement that accompanied opening the best new high school hoops arena in Kentucky, life was good. Three days after the boys won the championship and one day after the girls’ first Sweet 16 game was canceled, the world shut down.

Bolen had plenty of time to sit on his porch at his home in the eastern Kentucky mountains and reflect.

“I have always heard that you’ll just know when it’s time,” Bolen says. “Last spring was a time of such uncertainty. After going through that, I was sitting on my back porch and I thought: ‘It’s time.’”

That moment was close to a decade after David Bolen walked into the old GRC on Boone Avenue knowing no one and yet charged with the responsibility of turning around a school in need.

“As a country boy landing in Winchester, I was a little nervous,” recalls Bolen. “I wasn’t quite sure what to expect.”

If GRC’s 1,700 students and more than 100 staff wasn’t daunting enough, two assistant principals and multiple teaching positions had to be filled before the start of school in a few short weeks.

“I knew I was ready for a challenge but it was tough those first few weeks,” Bolen says. “I immediately started walking through the building and introducing myself, and I had to jump straight into hiring. It was non-stop interview and hire, interview and hire.”

Just a few months in, GRC was targeted for a Kentucky Department of Education scholastic audit, an extensive evaluation of learning environment, efficiency, and academic performance.

A difficult and tedious process, the scholastic audit, along with several other academic reviews that year, officially began Bolen’s transformation plan at GRC.

“GRC has always been a good school,” Bolen says, “but we needed a shot in the arm academically and that required change.”

Supt. Elaine Farris, whom Bolen credits as a tremendous influence in his life, enrolled him in the University of Kentucky’s Next Generation Leadership program.

“I used that experience as a catalyst to create what I called the Think Tank of Teachers,” he recalls. “We started meeting off campus. I strategically chose some teachers I thought were really positive and those I knew would challenge the change. I asked each person to bring two people to the next meeting. We built capacity, developed buy-in, and started making changes.”

One of Bolen’s strengths, the ability to empower his staff and build leaders, was critical in the early years of his tenure.

“I have always tried to empower teachers who do a good job and who work hard,” he says. “They need the freedom and latitude to do their job. I have also really worked hard to seek out people who have the mindset to lead and give them opportunities to do so.”

Departments began setting goals, developing common assessments, and tracking student data. “We looked at the students individually and we set goals while holding the teachers accountable,” he says. “Not all the decisions were popular but they paid off in the end.”

Before long, GRC was rising academically, just in time for an enormous transition – the move to a new GRCHS in the summer of 2013.

“A definite highlight of my 11 years at GRC,” says Bolen, “was being a part of opening the new GRC and over the years finally getting a complete campus.”

Bolen found it fun to plan and orchestrate the move. “I am a very logistical person and enjoy planning things out,” he says. “I had a huge dry erase board in my office with each step of the move mapped out. Everything went smooth and it felt good to be settled in one of the state’s most beautiful high school facilities.”

In the midst of both an internal and external transformation, GRC was certainly poised for something great. In 2015, it happened: GRC received the coveted School of Distinction from the state. The honor came again in 2016. The state no longer gives such honors but at the time, earning Distinction in back-to-back years was an impressive feat.

“Becoming a School of Distinction was huge,” says Bolen. “Nobody thought it could be done. It proved to me that the decisions we made and the pathway we chose to take paid off.”

His bio-med Project Lead the Way program prepared students for medical careers His Student Leadership Challenge empowered students to lead and take initiative in the school.

“I have always tried to shape things here at GRC by looking at the ramifications of each decision,” Bolen says. “What will this look like tomorrow, next week, next month, or next year? How will the dominoes fall? My leadership team and I made decisions and created programs based on what we would want for our own children. If they were here, what would they need to succeed?”

Even though education wasn’t Bolen’s first career choice, his parents taught for a combined 61 years. Clearly, it was in his blood.

“When the realization hit me that engineering wasn’t going to work,” Bolen recalls, “I said, ‘Let’s move on to what we know.’ And I never looked back.”

After earning his degree from Alice Lloyd College, a teaching job opened at Allen Central High School. In a classic case of baptism by fire, Bolen taught geography, economics, and US history, along with being golf coach, assistant football coach, and athletic director.

“I had some of my elementary teachers working under me,” he laughed, “but I learned more about public education the four years I was there than I have ever learned.”

After two years as principal at Paintsville High School, Bolen took a job at the Kentucky Department of Education, where he was working when the GRC position opened.

“I had never really envisioned that I would leave eastern Kentucky,” he says. “I felt I needed a change and went to KDE and really grew to love the flatlands.”

Still, Bolen cherishes the time he is able to spend at his mountain home at the mouth of a small hollow in Lackey. His mom is only five minutes away and though he lives in Richmond, his true home is in the mountains.

“It’s my escape,” he says. “I have a huge back porch with ceiling fans and in the summers, I spend all my time out there. I have some raised beds that I garden in. I sit in my porch swing and listen to music. It’s different there, very quiet and laid back. It’s a good place to think.”

He won’t retire to the mountains, however, as Bolen will start a new job July 5th at the Kentucky Association for School Administrators.

Though leaving GRC isn’t easy, he’s ready for a new chapter. “I look forward to it,” he says. “Much of my job will be going to schools and providing support. It will be perfect for me.”

Bolen loves to cook and is known for the feasts he often prepared for the staff at GRC.

“Years ago I lived across the street from my grandmother and I spent a lot of time with her,” he recalls. “When it snowed in the 70s, we would be out of school for weeks at a time and my grandmother would always cook breakfast for me. They raised their own hogs and we would go to the smokehouse and pull down a big ham and make breakfast. She always said if I teach you to cook, you’ll never go hungry. I have always cooked and enjoyed it.”

Indeed, Bolen is a master chef and loves to plan big meals, especially for his daughters, Kelsey and Karlie. Both are graduate students at Marshall University, Kelsey in physical therapy and Karlie in pharmacy.

As his time at GRC closes, Bolen says his greatest legacy is “the people who come after me.”

“So many people have worked for me who have become counselors, assistant principals, and principals,” he says. “I have truly enjoyed finding those people who have the passion and helping bring that passion out. I hope I have helped change some closed minds to open minds, toughened people up, and pushed them to focus. One of my mentors said to always surround yourself with people who bring out the best in you. That’s what I’ve tried to do.”

Bolen is known to take every opportunity to share a new dish he’s concocted, partake in a robust conversation, pass along an oldies rock song whose lyrics speak to him, or impart tidbits of wisdom.

His parting words to his GRC family?

“You’re going to see those flowers that you watered. All your investments in people will pass before you. Life is life and we all make mistakes. It’s what we do with those mistakes and how we use them to help other people. Invest in those around you and help them find their gifts and passions. That’s the best way to keep your legacy alive.”