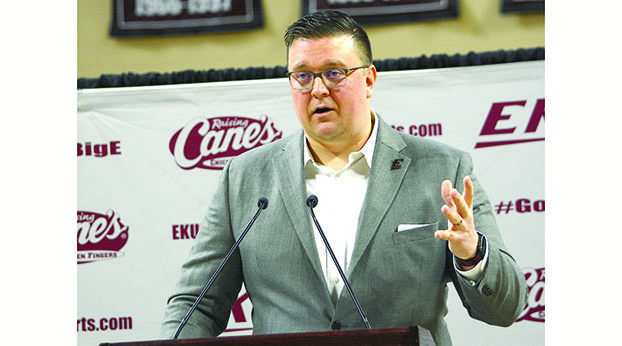 EKU bids farewell to OVC, begins anew in the ASUN

An era came to an end and a new one begins for Eastern Kentucky University.

Since the announcement was made last January, Eastern Kentucky Athletics Director Matt Roan said the school wanted to “go out of the OVC the right way” during the remainder of its tenure in the league.

“We wanted to go out as successful as we could be, and making sure that we’re respecting what we built 73 years ago, but at the same time, you know, the transitions with, you know, schedules being put together in pretty short order, you know, uniform patches, logos on fields, banners that hang in our facilities — all of those things, we’ve done that inventory, and then on July 1, we’ll be ready to make those transitions and be good to go,” he said.

Although the teams and destinations will change, Roan said “a lot of the operations are the same” when it comes to building schedules and making travel plans. Roan added there will be a learning curve when it comes to becoming familiar with the new conference.

“I think our focus and the direction that we’re heading is what changes there,” he said. “You know, certainly, relationships have to be formed, where you’re calling your counterparts at different schools, and you’re calling a league office with which we were incredibly familiar. You know, now we’re calling a different league office that has been incredibly supportive in the ASUN office, and we’re making fast friends in the ASUN with those nine members that were already there.”

Throughout the past two decades, Eastern has been seeking an exit door from the OVC, but nothing officially materialized. A move to the Mid-American Conference (MAC) was widely speculated back in the 1990s. More recently, the school was a finalist to join the Sun Belt Conference more than five years ago, before the league settled on Coastal Carolina. Roan said the program was in “advanced” negations with the Sun Belt at the time, but “for various reasons, they chose to go in a different direction.”

Despite the disappointment, Roan said the school remained interested in aligning itself with the southeastern part of the country.

Eventually, the ASUN turned out to be a landing spot for the program. Roan said the school’s base of alumni and recruiting outlets align within markets aligned with the 12 schools in the conference, giving the Colonels a “shot in the arm.”

“I think that made all the sense in the world for us,” Roan said. “I’s something to jumpstart us, and we’re excited about the new era and hope that our fans will get engaged and excited about it. And we’ll see where things lead.”

The support within the community, Roan said, has been “overwhelming positive under the circumstances.”

“I’ll have some people tell me, ‘Hey, I get why we’re doing it, but that doesn’t mean that I won’t miss, you know, some of the rivalries that we’ve created,’” Roan said.

“We have to be forward-thinking, we have to think about what is best for us moving forward, not necessarily what was best for us in the past. And I think, in that spirit, that notion has been well received by a lot of people.”
Roan said the school plans to maintain non-conference rivalries with former OVC foes such as Morehead State and others within the team’s former league.

“If we’re playing 16, men’s basketball and women’s basketball conference games, and you play an empty and that gives you 31 opportunities to compete in a regular season, we got 15 non-conference opportunities, there’s no reason that that non-conference can’t be filled with those, you know, OVC schools — Morehead especially,” Roan said. “As I talked with my counterparts that we are within the OVC, I was very, very clear that, hey, just because we’re doing this for our institution for athletics department, that doesn’t mean and we’re going in a different direction. That doesn’t mean that we still don’t want to maintain those relationships and those rivalries.”

Kentucky football fans made a big impression on 6-7, 330-pound Ohio offensive lineman Ryan Baer when he made his official... read more