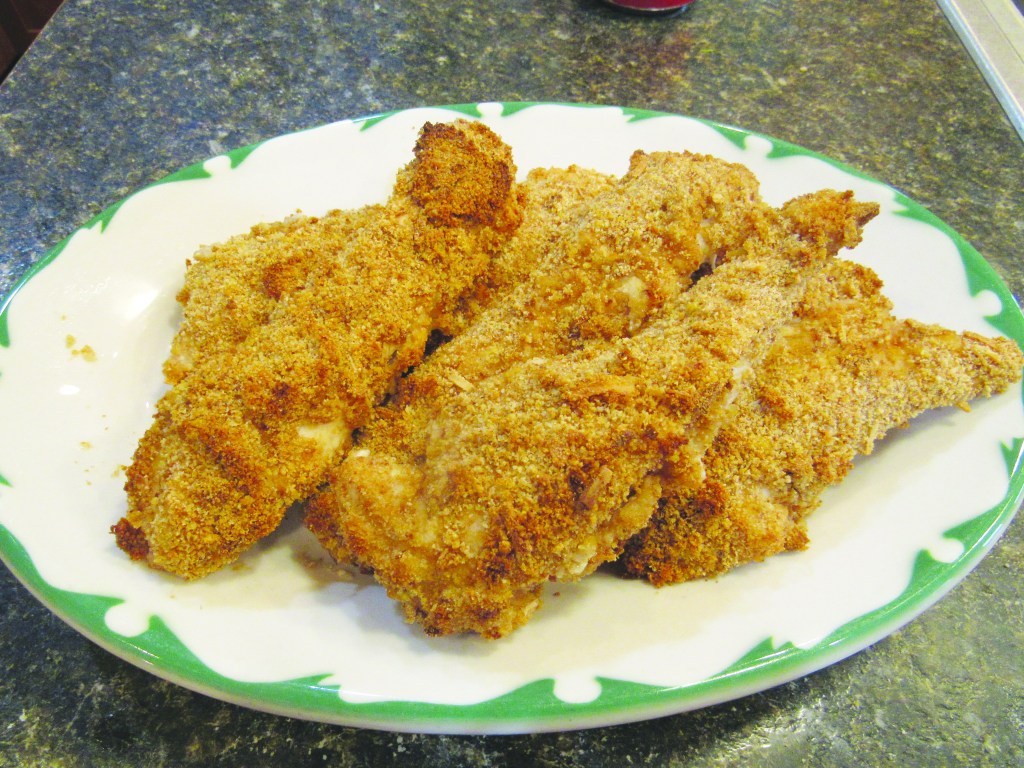 Toss chicken with Hellmann’s or Best Foods Real Mayonnaise in medium bowl, then dip each coated breast in onion mixture, turning to coat on all sides.  Arrange chicken on baking sheet.

Bake 20 minutes or until chicken is thoroughly cooked.

I spotted a packet of Lipton Onion Soup mix in the cabinet and headed to the computer to search for recipes using it.  I found several recipes, but this one for Savory Onion-Crusted Chicken, sounded like something that would hit the spot. The recipe was found on the Liptonkitchens.com web site.

On my trip to the grocery I’d picked up some boneless chicken breast and late in the afternoon I cleaned the chicken and then began preparing supper.

While the oven was preheating, I combined the onion soup mix and some plain bread crumbs in a shallow bowl and then squirted out the mayonnaise into another shallow bowl.  I don’t like mayonnaise but was hoping this dish would be good.  There was just enough mayo and the bread crumb mixture coat all the chicken I had, which was about 1 1/2 pounds.

I lined a baking sheet pan with non-stick foil, to make clean-up easier, and as I dipped each piece of chicken into the mayo and then into the onion soup crumb mixture, I placed the pieces on the baking sheet.

To get a good amount of the coating to stick to the mayo I had to roll the chicken pieces around in the in the mixture and pat the pieces with my hands to get it to stick.  Once that was done, I placed the baking sheet into the oven and turned my attention to the stove where home canned green beans from our garden were cooking, in addition to some carrots.  While the chicken was cooking, I decided I’d throw a potato into the microwave to “bake.”

I checked on the chicken after it had been in the oven for 20 minutes and the coating had not browned so I let it continue cooking another 10 minutes, then it appeared perfect.

The table was set, and after a prayer we began to eat.

The chicken was tender and had a good flavor and I was surprised that the chicken had a little bit of a crunch to it.  The flavor of the onion soup was not over powering.  Brad and I agreed that I Nailed It when preparing this dish.  Like I said earlier, I don’t like mayonnaise, but I couldn’t taste it in this dish.

This chicken is a winner and I’ll be adding the recipe to my self-made cook book.

Living With Purpose: Forever an optimist in an imperfect…