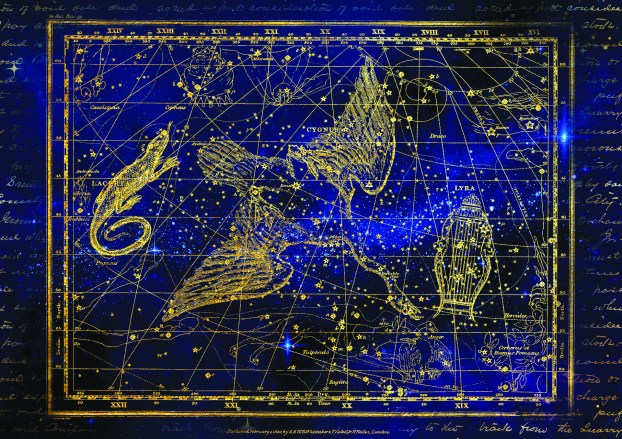 Smith: Orpheus and the Lyra

On the next clear, moonless night, go outside and face north. The star Vega will be shining very brightly all summer. Look slightly up and to the right and you will see a parallelogram of 4 stars that draw the constellation Lyra.

This is my favorite summer constellation. This lopsided box of stars itself isn’t all that visually impressive. But its accompanying story is a great one.

As the story goes, the young god Hermes steals a herd of sacred cows from Apollo, slaughtering them as an offering to Zeus. He keeps the entrails though, and adds a tortoise shell to create the first lyra. This instrument is often mistaken for a harp, but is actually the predecessor to the guitar, held in the lap and strummed on its side.

When Apollo realizes his cows are gone, he is furious. But Hermes plays some sweet riffs (let’s be honest, it was probably Free Bird or Wonderwall) and the music is so enchanting that Apollo instantly forgives Hermes. Apollo then gifts the lyre to his son Orpheus, a musical prodigy and the world’s first rock and roll god. The ancients tell that his supernatural talent was so legendary that even rocks would roll in his direction to hear him play.

Hermes falls in love with a wood nymph named Eurydice. At their wedding, she gets chased by a satyr, falls into a pit of vipers, is bitten in the heel, dies tragically, and is sent to the underworld. As the wedding becomes a funeral, Orpheus picks up his lyra and plays a song so heartbreakingly mournful that every god and goddess in Olympia is moved to tears. They cry so hard that their tears pelt the world below, a storm of sadness. They cannot stand to hear another sorrowful note and beg Orpheus to descend to the underworld to rescue his wife.

Orpheus descends into hell, soon finding himself face-to-face with the ferocious Cerberus, the hell hound that guards the gates into the underworld. Orpheus takes his lyre and starts shredding, playing so masterfully that he tames Cerberus and is granted an appointment with Hades to successfully negotiate the return of Eurydice to the world of the living. His masterful licks charm even the stone-hearted lord of hell and Hades agrees to release Eurydice. However, Hades warns Orpheus that for no reason must he look back while his wife is still in the world of the dead.  He should wait for Eurydice to step into the light before he looks at her.

So Orpheus starts playing and walking, pausing between notes to hear his wife’s footsteps behind him. As soon as he steps into the light, he whirls around to embrace his beloved, But she is a step behind and still shrouded in darkness. Orpheus only gets a tiny glimpse of his love before she is pulled back into hell forever.

Orpheus is so heartbroken he can no longer play. He wanders from town to town, until he is torn limb from limb by a band of feral women. After his death, Apollo takes Orpheus’ lyre and places it in the night sky as the constellation Lyra.

What are we to make of this tale? At first blush, the story is clearly about faith and trust. Orpheus must trust Hades to hold up his end of the bargain, must have faith in a higher power (in this case Hades), must believe that love will eventually triumph over death.

One could argue that the moral of the story is to keep moving forward in life. The moment we look back to the past, we get stuck. We should always move with an eye toward the future.

But what sticks with me is this: just keep playing. While losing Eurydice was a terrible tragedy, Orpheus willingly gave up his first true love, which was music. He denies the world – and his own soul – the universal gift that is music.

Music is life force come alive. Playing or listening to music reduced anxiety, blood pressure, and pain. It deepens sleep, elevates mood, sharpens mental acumen, boosts memory, and generally improves quality of life. Music sparks our creativity and connects us to meaning. It provides solace when it’s most needed. When Orpheus gives up music, he gives up on living.

Want to feel better? Be a better human? Pick up an instrument, turn up the radio, or warm up your voice. But keep playing.