Where in the world?: Clark County Court Clerks 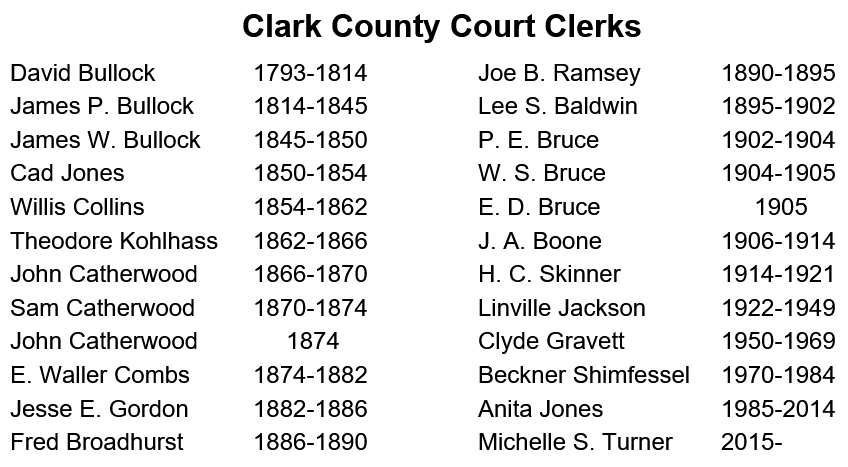 Where do you go to apply for a marriage license? To obtain a copy of the deed to your house? To register to vote? To renew your vehicle registration? These and many other important government services are provided by the county court clerk’s office. The county clerk is also responsible for recording and maintaining county records. Clark County is most fortunate in having a nearly intact collection of records going back to 1793. Some of the more important include the county’s deed and mortgage books, order books, marriage and probate records.

Before 1850, county clerks were appointed by the county court. Then Kentucky’s Third Constitution made the county clerk an elected office with four-year terms. Between 1793 and today, Clark County has had 24 county clerks whose names and terms of service are shown in the accompanying table. The remainder of this article consists of a brief biographical sketch of each clerk.

David Bullock (1757-1815), Clark County’s first clerk, served for 21 years. He kept the office at his home on present-day Mt. Sterling Road, about a mile from the courthouse. According to one of his deputy clerks, “I found Captain Bullock a plain, sensible, well-educated and very stern old Virginia Gentleman. [He] was one of the best and altogether laziest man I ever saw. He went to the town of Winchester every Saturday and except that he scarcely ever went of the place.”

When David Bullock retired as clerk, his son James P. Bullock (1789-1858) was appointed to the office. During the War of 1812, James was badly wounded at Dudley’s Defeat but recovered. He married Mildred Didlake, raised twelve children and died in Sumner County, Tennessee. James served as clerk for 31 years.

James P. Bullock gave up the office in favor of his son, James W. Bullock (1817-1900), who kept the job for five years. He then moved his family to Sumner County, Tennessee. The Bullock family kept their hold on the clerk’s position for a total of 57 years.

Cad Jones ( -1862) became Clark County’s first elected county clerk. He was the bachelor son of Thomas ap Thomas Jones and Elizabeth Fauntleroy. A Jones family history states that Cad became “a licensed attorney at law, but who on account of delicate health did not engage in the active practice of his profession.

Virginia native and Winchester attorney, Willis Collins, was a son of Dr. Dillard Collins. Willis served as a deputy sheriff and county justice before being elected to two terms as clerk. His Winchester store, Willis Collins & Co., sold “fancy goods, hardware and groceries.” He was one of the first lot holders of Winchester Cemetery; his wife Mary has a gravestone but there is not one for Willis.

Theodore Kohlhass (1814-1868), the son of a German immigrant, had a varied career in Winchester as a grocer, accountant and real estate developer. Theodore and his brother Henry established the subdivision known as Kohlhassville after the Civil War, selling lots to African Americans.

John Catherwood (c1806-1882) and his son John (1849-1898) both served as clerks. John fought on the Confederate side under Gen. Kirby Smith during the Civil War and after the war was held as a prisoner in Columbus, Georgia. One obituary called John “one of the most popular men who ever lived here.” He ran a grocery and served as postmaster, constable and sheriff before being elected to the clerk’s office for two terms. During his second term as clerk, his political opponents charged him with fraudulently holding office, something to do with an irregularity in his parole from Georgia. Until this got settled in Washington, D.C. (in 1874), John switched roles with his son Sam and worked under Sam as a deputy clerk. Sam later moved out of state on business for many years. John and Sam are buried in Winchester Cemetery.

Waller Combs (1844-1896), a Confederate veteran, taught school in Schollsville, where his father Glenmore was a blacksmith. Waller became a Master Mason in the Winchester Lodge. He served as county assessor before being elected to two terms as clerk. He moved to Kansas and later to Washington, D.C., where he died.

Jesse Gordon (1829-1888), grandson of Revolutionary War veteran John Gordon, was born in Clark County, where he married Eliza Ann Haggard. After farming for many years, he moved to Winchester and ran a shoe store. According to his obituary, “The funeral procession was the largest ever seen in our city, a fact which attests the hold he had on the affections of our people. He leaves a wife and four daughters to mourn his loss.” Jesse’s and Eliza’s graves are marked with a large obelisk in Winchester Cemetery.

A native of England, Fred Broadhurst (1856-1923), came to America with his widowed mother when he was two years old. They lived in Canada and Cincinnati before moving to Winchester where she worked as a seamstress. Fred served as a deputy clerk under Waller Combs and Jesse Gordon before being elected to the office in 1886. He died in Winchester after a long illness.

Joe Ramsey (1860-1930), a son of Rev. Joseph H. Ramsey and Cynthia Haggard, was born in Clark County. After both his parents died when he was in his teens, he went to live with his sister, Mary Ramsey Gordon, on a farm in the Blue Ball area. Joe married Sallie Strode and moved to Winchester, residing on Highland Street. He served as a deputy clerk before being elected to the office.

This article will be continued.