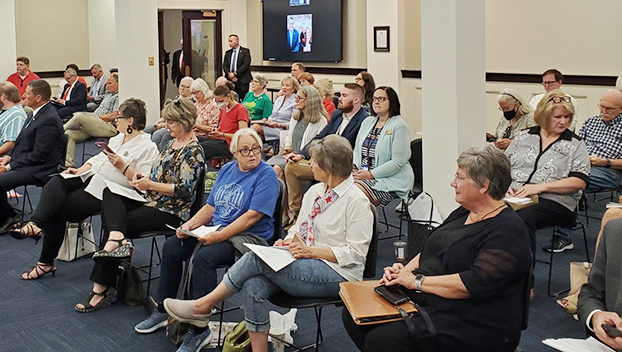 On the first day the public has been allowed to be back in the Capitol, a large crowd came to the Interim Joint Education Committee meeting were Critical Race Theory was the topic. (Kentucky Today/Tom Latek)

Proposed legislation for the 2022 General Assembly that would ban the teaching of Critical Race Theory in Kentucky drew more than two hours of discussion during a committee meeting on Monday.

“Critical Race Theory, or CRT, is rooted in Marxism,” he told the Interim Joint Education Committee. “Karl Marx wrote and built his entire political program on the theory of class conflict. He believed that industrial societies had an imbalance of power between capitalists and workers. The solution to that imbalance is revolution.”

Lockett continued, “During the 20th Century, a number of regimes went through Marxist-style revolutions, and each one of them ended in disaster. CRT is simply identity-based Marxism, based solely on the color of one’s skin. At the end of the day, all Marxist theories fail and come unraveled.”

Critical Race Theory is part of a movement that proposes examining U.S. history and modern society through a focus on the legacy of slavery, racism and discrimination. Critics say it proposes the United States is a fundamentally racist country.

Co-sponsor Rep. Jennifer Decker, R-Waddy, noted, “It has been used for decades, perhaps not here in Kentucky but across our nation, to indoctrinate students at taxpayer expense. While this theory masquerades as an academic study of the role race has played in America throughout the nation’s history, it is instead a subjective theory that promotes division and interracial hostility.”

Kentucky Education Commissioner Jason Glass said site-based decision-making councils at each school set the curriculum, and that there are no schools currently teaching CRT, noting that some people confuse equity with CRT, which are not the same thing.

Glass did have something to say about not only Lockett’s bill, currently designated BR-69, but another one, BR-60, proposed by Rep. Joseph Fischer, R-Ft. Thomas, that does not include postsecondary institutions.

“At their core, BR-60 and BR-69 are educator gag and student censorship bills that seek to define what can and cannot be taught, discussed, either formally or informally, in Kentucky schools,” he testified. “Notably, these censorship bills circumvent the decisions of school-based councils, which have long been trusted to make curriculum decisions in their schools, in keeping with our tradition of local control.”

Glass said there are provisions in BR-69 that are based not on facts, but feelings of discomfort, guilt, anguish or any other form of psychological stress, on account of sex, race or religion.

“Such a standard will be nearly impossible to enforce and may create significant constitutional challenges that Kentucky will have to defend,” he said. “The Constitution guarantees freedom of speech and allows people in the United States to express their views, regardless of the feelings of discomfort it may cause in others. It would be difficult to have any discussion of history if all concepts have to be vetted on whether or not they create an uncomfortable feeling in some individual or group.”

UK and others get grant for prevention of stroke,…