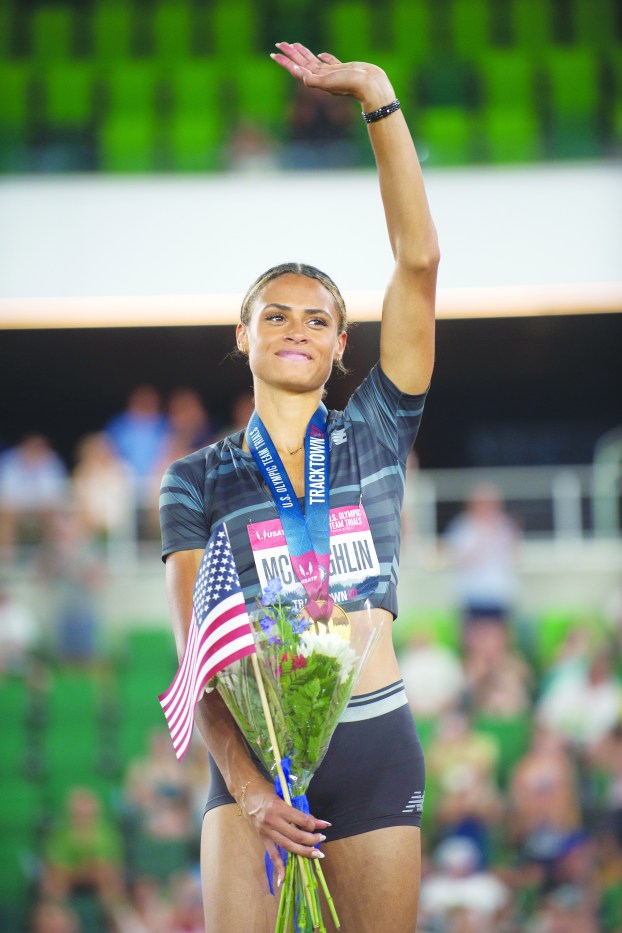 Former UK track star Sydney McLaughlin set a world record in the 400-meter hurdles at the U.S. Trials but has the potential to go even faster in the Olympics. (USA Track & Field Photo)

Sydney McLaughlin was a SEC and NCAA champion in the 400-meter hurdles during her one season at Kentucky — which came after she made the U.S. Olympic team at age 16 for the Rio Olympics.

She’s headed back to the 2021 Olympics in Tokyo after setting a new world record of 51.9 seconds in the U.S. Olympic Trials in the 400 hurdles. She became the first woman to break 52 seconds.

One reason McLaughlin credited for her success was a switch to coach Bob Kersee. He has coached some of America’s best female Olympians including his wife, Jackie Joyner-Kersee, along with Florence Griffith Joyner, Gail Devers and Allyson Felix.

“If anybody knows Bobby, he is old school,” said Sharrieffa Barksdale, a 1984 Olympian who now works for USA Track & Field. “He can predict where you should be at all the time. Being out there with him daily, he’s such a no-nonsense person.”

Kersee has McLaughlin study tape of Edwin Moses, one of the all-time great hurdlers, and get tips from Joyner-Kersee. He also helped McLaughlin change from the standard 15 strides between hurdles women take to 14 by extending her stride.

“Sydney never stutter stepped (in the Olympic Trials). He gave her a chance to do the 100 hurdles with that bad leg and now she can hurdle with either leg without stuttering. I could alternate but would stutter step.She has mastered what he wanted her to do and it showed,” Barksdale said.

Barksdale, who lived in Lexington for 22 years, said getting to train with Allyson Felix, another Kersee client, helped McLaughlin also. Felix, 35, qualified for a fifth Olympics during the U.S. Trials.

“Just being around Allyson was good for Sydney,” Barksdale said. “It was always easy to tell Sydney was going to be special even before she got to UK. But now she has just gone to a different level.”

Barksdale thinks the world record could be lowered again at the Olympics by either McLaughlin or reigning world champion Dalilah Muhammad, who finished second in the U.S. Trials  in 52.42 seconds.

“Between them, the world record will go down again,” Barksdale said. “She (McLaughlin) has so much left. She did not even look like she was running. She wanted it and sacrificed and gave up a lot to get to this point. Both of them (McLaughlin and Muhammad) are going to be peaking at the perfect time for the Olympics.

“They push each other. They both went up to each other after the race, and that was really special. That’s what our sport is all about and why they are good for each other.”

So what time could the 400 hurdles produce in Tokyo?

“I think 51.6 or 51.7. Either one of them could do it,” Barksdale said. “The one who runs the perfect race will win gold and set another world record. I know it’s coming.”

Robinson, Allen ready to win together at UK

When they were playing high school football against each other, quarterback Beau Allen and receiver/returner WanDale Robinson often talked about... read more