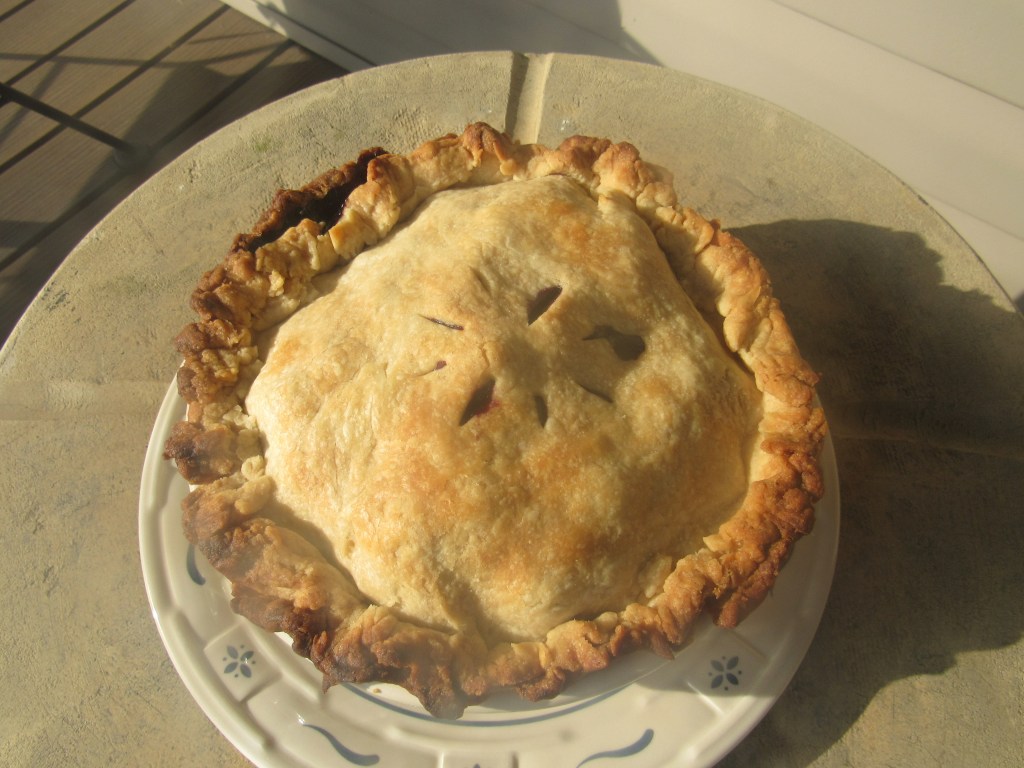 Use pie shell for top and bottom

For filling toss together:

Combine all ingredients and pour into pie crust.  Bake at 425 degrees for 50 minutes.

A few years ago, a former co-worker gave me her husband’s recipe for Blueberry Pie.  When she gave it to me, she said “it’s pretty tasty.”  We grow blueberries and have had a great crop so far this year; in spite of all of nature’s creatures trying their best to get them.

I decided to make Doug Witt’s Blueberry Pie one afternoon since there were plenty of berries in the refrigerator.  Brad and I didn’t need to eat an entire pie over a few days so I got the bright idea to make a small version in one of my mini Longaberger pie plates.  I figured I could make one recipe of pie dough and divide it in half for a bottom and a top crust, then just half the filling ingredients.

After rolling out the pie dough and placing one disc in my mini pie plate then rolled out the second disc and let it sit while I put the filling together.  I combined all of the dry filling ingredients then added a little bit more than a half tablespoon of melted butter to the mixture.  I poured in 3 cups of blueberries and gently tossed until all of the berries were coated.  At that point I wondered if my mini pie plate would be big enough to hold all those berries.  Low and behold, it did.  I placed the second pie dough disc on top, crimped the edges together, and then cut a few slits in the top crust so steam could escape while it baked.  Into the oven the pie went.  I was a little concerned that the pie might ooze out of the crust so to err on the side of caution I placed a baking sheet on the rack beneath the pie.

I set the timer then started cleaning up my mess.  The pie was smelling good so I kept checking on it to make sure it wasn’t getting over done.  Once 50 minutes had passed, I opened the oven and removed the pie to let it cool.  The edges of the crust did get a bit browner than I usually like, but it wasn’t burnt.

After supper we headed to our garden to continue putting up an electric fence, to hopefully keep out unwanted pests.  After running a few strands of wire, we headed to the blueberry patch to pick more berries.

Once we were back in the house, I asked Brad if he wanted to have some pie and even though it was later than he usually eats, he decided to join me in trying Doug’s pie.

We eah had a small slice. Brad put Reddi Whip on his and I added a scoop (or two) of vanilla ice cream to mine.  We dug in and immediately knew this recipe is a winner.  Even though the pie filling was runny; it didn’t hurt the taste one bit.

The flavor of those home-grown berries was so good.  There’s not a lot of sugar in this recipe, but the sweetness of the berries made it perfect.

I’ll have to agree with Doug’s wife, this pie is “pretty tasty” and I definitely Nailed It.  And my waist thanks me for only making a small one.