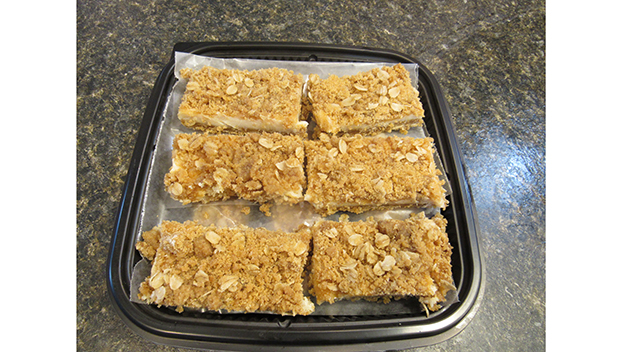 In a bowl, sift together the flour, baking powder, and salt.

In another bowl stir together the condensed milk and lemon rind.  Slowly add the lemon juice, stirring constantly so it doesn’t curdle.  Set aside.

In a third bowl, using an electric mixer, cream the butter.  Add the brown sugar and beat well.  Add the flour mixture and mix until thick.  Use a spoon to stir in the oats.

Bake for 30 to 35 minutes or until top is golden brown.  Cool in the pan.  Refrigerate for at least 1 hour.  Cut into squares and serve.

We were going to go out to eat with my mom and I wanted to prepare a dessert for her so I started my search for something lemony.  By now you may know that lemon is my mom’s favorite. I searched my stack of dessert recipes and when I found this one for lemon squares, I figured they would be a perfect ending to our meal out with mom.

I’d cut this recipe from a magazine, but I have no idea which one.  The only credit I can give is to the author, Susan A. Lane.  The following accompanied the recipe:  Lane chose the word “fabulous” to describe this recipe because she says it makes the best lemon bars she has ever eaten.  Now, I have a really good lemon bar recipe but I was trusting Ms. Lane’s recommendation that these would be even better.

On Saturday evening I gathered the ingredients and started putting this dessert together.  I preheated the oven and instead of buttering the pan I used shortening.  I put the first three ingredients into a small bowl and whisked them to combine then set the bowl aside.  I poured the sweetened condensed milk into another bowl and zested the lemon right over top and stirred the mixture.  The juice from the lemon yielded almost 1/2 cup.  Instead of juicing another lemon I just poured in enough of the bottled kind to fill the measuring cup.  I poured the entire amount of lemon juice into the sweetened condensed milk and stirred quickly.  In the third bowl I used my handheld mixer to cream the butter then added the brown sugar mixing till fluffy then I poured in the flour mixture and turned on the mixer again.  The batter was thick and crumbly and it was time to add the oats, mixing by hand.  I assume you mix the oats in by hand so they don’t break up using a mixer.

I poured in a little over half of the crumbly mixture into the prepared 9 x 13 pan and patted it evenly then poured the liquid mixture over the top, spreading to an even layer.  Next, I just sprinkled the remaining dry ingredients over the top and into the oven the dish went.

After 30 minutes the top of the lemon square was lightly brown and I removed them from the oven.  They cooled and then into the refrigerator they went.

On Sunday afternoon I removed the pan from the refrigerator and began trying to cut them into bars.  They were pretty hard and I wondered if I’d be able to get them out of the pan.  At this point I wished I’d lined the baking pan with parchment paper so I could have lifted them out of the pan to cut them.  After a little elbow grease, I did get the bars sliced and out of the pan.

I packaged up most of them in a container and put them back in the refrigerator until we headed to get mom.

I had a few of these bars leftover and took them to our neighbor, Rachel, to try.  She and her daughter, Maggie, along with her in-laws gave them a good review, though Rachel said since she loves lemon, she would have liked a thicker layer of the lemon mixture.

After our meal at a Lexington restaurant, I pulled out the container of lemon squares and handed them to my mom; she opened them and passed them around.  We all agreed these lemon squares were good.  However, I’ll have to confess that I like my original lemon bar recipe better but overall these fall into the Nailed It category and I’ll hang on to the recipe.

Down the Lane: It Is in the Planning Stage