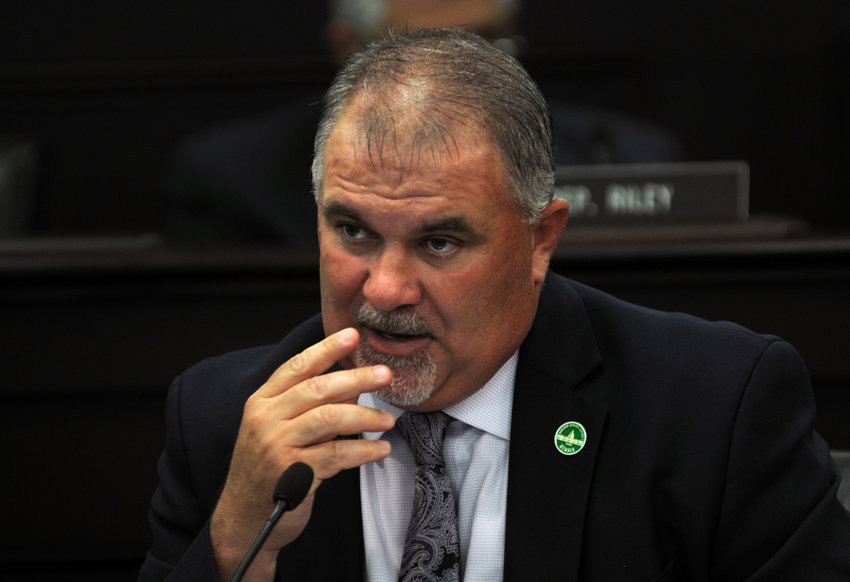 State Rep. John “Bam” Carney, who served as the House majority leader and was a bright light for education and young people in the community where he served, has died at 51 following a 19-month illness.

Carney, a Republican, represented the 51st District, which includes Campbellsville and Columbia, Kentucky, since 2009. He served as the House majority leader and on the House Education Committee.

He was a coach for basketball and football at the middle and high school levels for 16 years in the Taylor County school system and was a faithful member of Living Grace Church where he served as an usher and a coach in Upward Basketball.

His education involvement also included stints on the Taylor County Board of Education and on high school site-based councils for Taylor County and Washington County.

Carney fell ill in late December 2019 with an abdominal illness and was transferred to Hospital in Louisville the same day.  He spent 65 days in intensive care. After his Louisville hospital and rehabilitation stay, Carney was moved to Select Specialty, which is in Ephraim McDowell in Danville.

He recently returned to his home after being hospitalized for about 19 months but had to be readmitted to the hospital in June.

A family statement posted by Mark Carney on Facebook said that John Carney “passed peacefully” at the University of Kentucky medical center.

“Thanks be to God for the life that Bam lived — and for all that he has gained today,” his family wrote.

Kentucky lawmakers and officials heaped praise on Carney for his work in the public sector.

“The hearts of all Kentuckians, Republicans and Democrats alike, are filled with grief today at the passing of our dear friend, Rep. John “Bam” Carney. He was a bold leader not only for our Republican lawmakers, but for his constituents and our entire state. We are proud of how hard he fought, and we will dearly miss his sense of humor, keen intellect and most of all his relentless commitment to making Kentucky a better place, especially when it came to working to lift up our students, teachers and schools. We offer our deepest sympathy and prayers to all of Bam’s cherished family and friends.”

“It is with a heavy heart that I join my fellow colleagues in the Senate in expressing condolences to the Carney family on the passing of their beloved Bam. He fought the fight like everyone knew he would, and now may he rest in eternal peace. I personally was truly blessed to have served alongside him in the House. We will miss our colleague’s contributions to the Commonwealth, but mostly we will miss our friend – his smile, his passion, his heart, and the love he gave so freely to others throughout his life.”

“I’m truly saddened to hear of the passing of my friend and colleague in the General Assembly, Bam Carney. He was a consummate professional who had a tremendous passion for his job as a legislator and teacher. It was always great to work with him in Frankfort. He was beloved by his community, who knew they had a fighter representing them – and Bam was a fighter until the very end. This is truly a loss for the Commonwealth. My thoughts and prayers go out to his family and loved ones during this difficult time.”

“Bam Carney was a tireless public servant whose devotion to his fellow Kentuckians knew no bounds. He uplifted the lives of his constituents through more than a decade of hard work and dedication, deeply committed to Central Kentucky and its people. It is a testament to his strong character that he was chosen to lead Kentucky Republicans as the House Majority Leader, a role which he passionately embraced,” McConnell said in a statement.

“Throughout his tenure, Bam took on tough issues and fought for Kentucky’s most vulnerable students, using his expertise as an educator and coach to change the Commonwealth for the better. During his long illness, he continued to serve in a different way by becoming an inspiration to others who face hardships. The people of Kentucky are profoundly thankful for his advocacy and work.

“From the statehouse, to the classroom, to the United States Senate, Kentuckians are deeply saddened by this loss. Elaine and I share our heartfelt condolences with Bam’s family, colleagues, and friends.”

“Our hearts are broken at the loss of our friend and brother, Bam Carney. Bam was a passionate educator, an outstanding legislator, and a tremendous leader for our Commonwealth,” Osborne said. “Those who had the privilege of working with Bam knew he led by example and subscribed heavily to the belief that you can do great things if you don’t care who gets the credit. As House Education Chair and House Majority Floor Leader, he worked diligently to provide a voice for children in classrooms across our state. His collaborative approach led to the passage of the School Safety and Resiliency Act, bringing focus to both strengthening physical safety and our approach to childhood mental health issues.

“For more than a year and a half Bam fought valiantly to overcome his health issues, all while remaining steadfastly dedicated to the people of his district. While there is great comfort in knowing he is free from the constant pain and struggle, we pray his sons, his mother, and his entire family find comfort in knowing so many join them in mourning the legacy of a good man.”

“I just learned about the passing of my former House colleague and friend, Representative Bam Carney,” Quarles said. “When I was first elected to the House of Representatives, Bam was patient and kind in helping teach me the legislative process and how to best represent my constituents. He knew how to do both well, and was a visitor to my district many times over the years.

“Bam was a fighter. Through his role as chair of the House Education Committee, Bam fought to put the interests of students first. As House Majority Leader, he fought to bring about conservative vision for Kentucky, increase economic opportunities, and make the American dream possible for more Kentuckians. And, in these last few years, he fought tirelessly to get well, get home, and get back to representing his constituents in the halls of Frankfort.”

“We deeply mourn the passing of state Representative Bam Carney, a good friend we were proud to serve with in the Kentucky House, and pray for his family during this difficult time.  For more than a year and a half, he fought his illness with the same level of determination and dignity that he brought to his work as a legislator and as a legislative leader.  He was an outstanding public servant who truly believed that, whatever our differences, we are united as Kentuckians.  He will be missed, but his life and legacy will never be forgotten.”

“Britainy and I are sad to learn of the passing of Rep. Bam Carney. Our sympathy and prayers go out to his family and friends,” Gov. Andy Beshear wrote in a tweet.

Down the Lane: It Is in the Planning Stage