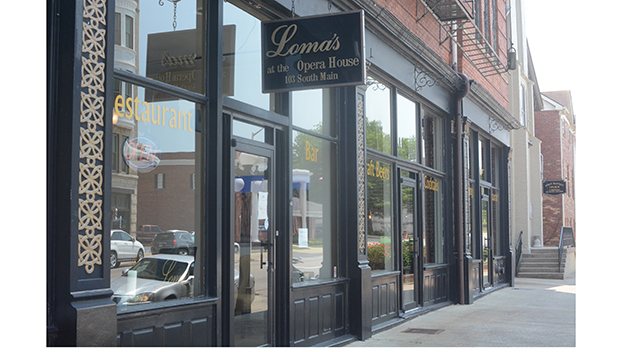 Winchester's Loma's at the Opera House is one of many local independent restaurants experiencing difficulties hiring staff. – Photo by Dillan Combs

The COVID-19 pandemic saw many across Kentucky – and in Clark County – lose their jobs. As restrictions lessen, businesses are now having difficulties rebuilding that workforce.

Winchester-Clark County Chamber of Commerce Executive Director Cindy Banks says nearly all Winchester businesses have been “hit hard” by the current employee recruitment struggle. Banks says that business within Clark County’s industrial park have 606 openings they are trying to fill, and that local restaurant staffs have had to work extra hard to make up for the lack of help.

Megan Sum, manager of Loma’s at the Opera House in Winchester, said part of the reason employees are currently hard to find is due to the competition in pay with nearby restaurant chains.

“We’ve got places in town like Cookout or Wendy’s that are hiring people at $16 an hour,” she said. “It’s created a competitive pay environment that makes it harder, especially on small businesses.”

Loma’s has been short staffed since the start of the pandemic in March 2020. Sum explained that the restaurant has been doing its best to pull through thanks to a core staff that has been around since before establishments had to close dine-in eating. The staff, Sum boasts, has stuck around and worked extra hard for the sake of Loma’s.

“I think the community as a whole has kept us afloat,” Sum added. “They’ve been patient and understanding that we’ve been doing our best. I think Winchester wants us here, and we’re very fortunate to have that support.”

According to Banks, the additional unemployment benefits being given to those who lost their jobs due to the pandemic aren’t helping solve the issue either.

“Because of all the federal government benefits given to them, people are actually making more money staying at home,” Banks explained. “And now with the new unemployment regulations, all you have to do is show you have put in a resume to prove you are searching for a job.”

Banks recalled complaints a local restaurant expressed after two individuals repeatedly submitted resumes, only to never show up for a scheduled interview. While local businesses have had no issue retaining the employees they already have, motivating others to apply is difficult when you’re essentially asking people to give up their time for less money in return.

“That’s a lot of money out of pocket for businesses,” she said. “There’s a lot of cost involved in hiring an employee, if you’re trying to offer benefits especially. It’s just not feasible to pay as much as the government is right now to make a living. It’s a catch-22 and I don’t know the answer. I think that’s what the entire U.S. is trying to decide right now, or the President.”

Further complicating the situation is the rise in COVID-19 cases that’s been trending recently. On Monday, Kentucky Health Commissioner Dr. Steven Stack said the delta variant of the virus is “spreading like wildfire.” Banks said that because of this, she isn’t sure an end is in sight.

“I don’t know when employment is going to get back on track, and I don’t think the businesses know either. There’s no way to know,” said Banks. “Especially with the atmosphere we’re creating for people making more money at home – how that’s going to affect them when they do have to find a job. How are they going to feel about having to work for less money?”

While the situation remains difficult, the Winchester-Clark County Chamber of Commerce offers resources to assist businesses. Members have free access to post job openings on the Chamber’s website at www.winchesterkychamber.com. As a member, Banks said that taking part in Chamber meetings is a great way to network with other businesses. The group also offers classes to help business owners, and Chamber leaders are always open to listening to and assisting members with problems their business may be having.

For potential employees who feel that period of unemployment reduces their qualifications, Banks says several free resources are available to get people back into the workforce. Many local businesses offer on-the-job training, and Bluegrass Community and Technical College is currently running a “Work Ready” scholarship program, where those who qualify are given the opportunity to receive tuition-free learning. Students in some programs can graduate in as little as four to six months.

“BCTC has many workforce certification programs, and several of our employers are offering them too,” said Banks. “With the many resources that are available, ‘no longer being qualified’ is just an excuse to me.”