What I Learned About Model Trains by (Accidentally) Crashing a Wedding 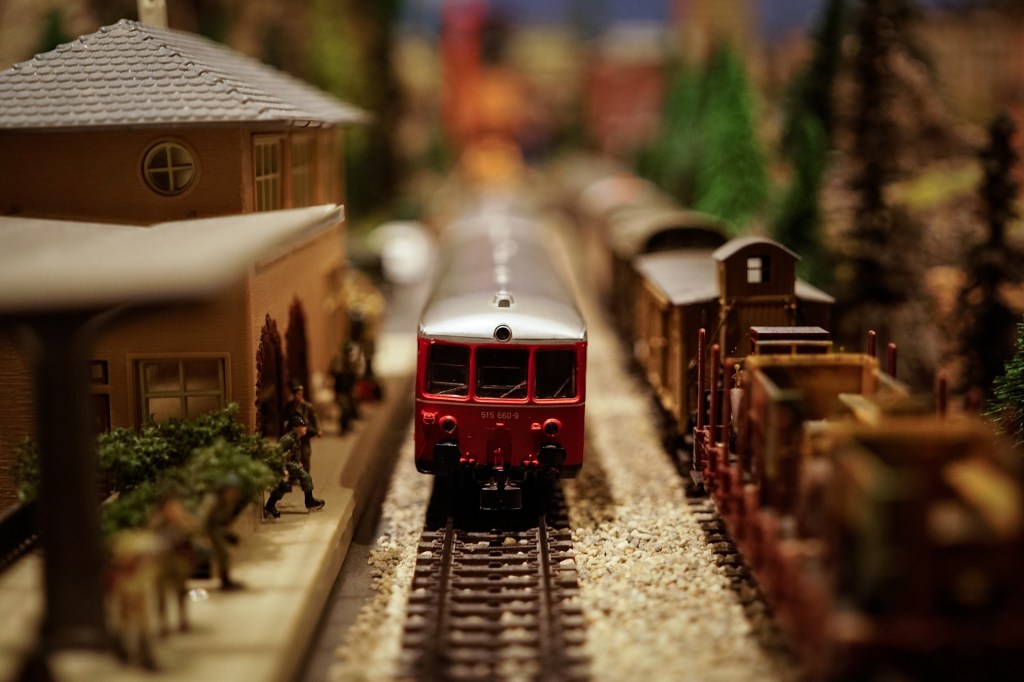 I crashed a wedding.

It was an accident, but it totally happened. I have a mantra I repeat when things go sideways: if this doesn’t kill me, it’ll make a good story. Writers are always on the lookout for fodder for columns.

You might remember my recent ill-fated, solo weekend at the hotel that was being completely renovated. I had gone with the intent to lie by the pool and drink Old Fashioneds at the bar. But everything was a giant pile of rubble.

Except the golf course and the beautiful, antebellum-style mansion on the green. Since literally everything at this hotel was closed for renovations, I found myself wandering around the course on Saturday night. When I came upon the manse, there was a gilded sign that read Mansion Restaurant.

“So not everything is closed!,” I thought, gleeful at the idea of eating something that did not require me to cross four lanes of highway to reach a fast food chain. I walked in and immediately was charmed and distracted by the architecture. This always happens if you take me into a beautiful old house. I start wandering around as if my name is on the deed. I stared, slack-jawed, at the sweeping staircase. At the intricate, Greek Revival lattice work. The Civil War is an embarrassing, problematic era for Americans, especially those who identify as southern. This house was surely built on the backs of enslaved peoples, but that fact did not negate the beauty of this neoclassical wonder.

So I’m meandering about and not really paying attention to the people that are coming and going in the high-ceilinged rooms. Someone places a glass of red wine in my hand and I drink it, again not really processing the gift. Then someone hugs me. Now anyone who knows me can attest that I love hugs, but being squeezed by a complete stranger will bring you back to reality.

I telescoped back, giving my attention to the person so intimately close to my face. “Oh,” she cried, “I am so sorry. You look just like Greta!” I laughed, then finally looked around. I was one of only a handful of white faces in the crowd and extremely underdressed in my simple, cotton black shift.  No wonder she thought I was Greta. It was a good bet, statistics-wise. I finally realized that I had wandered into someone’s wedding reception. “I thought they were serving dinner!” I choked out the words, completely mortified. “You’re fine, love,” she smiled. “Come on. Let me introduce you to my husband.”

It seems I had met the MOTB. Her name was Donna and she was an oncology nurse from Pennsylvania. Her husband Sterling – the FOTB – was an insurance salesman and a model train enthusiast.

For the rest of the evening, I would meet stranger after stranger. And every one of them whispered this – model train enthusiast – as if they were telling me he had terminal cancer or was a pedophile. It didn’t take long to figure out that no one wanted to be stuck talking to Sterling because all he could talk about was model trains.

Score! Literally my very favorite thing in the entire world is hearing someone talk about something they are so passionate about, they cannot not talk about it. When I shook Sterling’s hand and told him I would love to hear about his trains, I meant it. I am really optimistic and easily influenced by other people’s enthusiasm. Before the night was through, I knew I would be drinking the model train Kool-Aid without asking what was in the cup.

Here’s what I learned about model trains:

It’s a great way to be alone.

Generally, people think that model trains are lame and boring, so no one wants to take you up on the offer of checking them out. It’s a great way to find time alone.

The entire southern railroad network built during the slavery era was built exclusively by slaves.

Both African American genders were involved in the hard, dangerous, brutal work of railroad construction. While I did not know this, of course it makes sense once you hear it. Until recently, there was little diversity in the detailed humans that inhabited train worlds. For years, Sterling had to darken the faces of some of the townspeople in his train world.

It can be social.

The model train world isn’t that large.  If you need someone to build you a ramp or fix the electrical line between your bridge and depot, you have to reach out. Most cities have train clubs with dozens of members. According to Sterling, the world is small enough that skin color seems to fade. Though he might not see himself represented in the tiny models available, he is well-respected in Pennsylvania for being a “circuit breaker genius.”

A really good train world requires imagination and creativity. It’s just another medium for the muse to work through us.

We kept ordering drinks and talking trains. Then I learned the real reason people fall for trains:

It lets you feel – if only for a moment – that you are in control.

Life is uncertain. Human beings have a deep-seated desire for certainty and control, even though we realize, deep down, that we have little sway over God’s future flicks.

I only saw Sterling’s tiny world in pictures, but I know it was amazing. I am also now an avid model train enthusiast. If you are as well, and you’re reading this, reach out and let me glimpse your tiny train world.