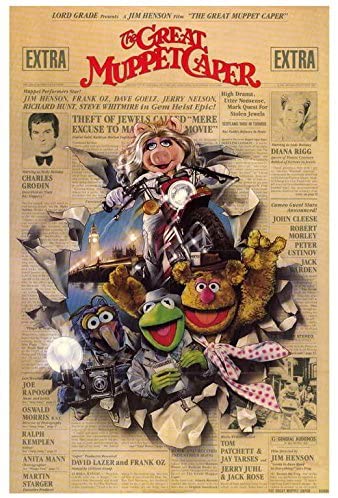 It can be a dark place out there full of scams, deceivers, and naysayers.  When you venture out into this world leaving the comforts and security of your homes, it can be feat for some. A positive attitude, perseverance, and creativity go a long way in changing your perspective and the physical world around you. You should strive to leave every person, place, and situation better than you found them. This imaginative way of engineering your thought process will allow you to navigate through the potholes of the day and minimize the stress which we carry on in our adult minds.  Today’s return to childlike wonder, unconditional love, and constant excitement is put on full display to enjoy in the musical heist comedy, “The Great Muppet Caper” (1981).

In the second live-action Muppets film, the ever-adventurous Kermit, Fozzie and Gonzo are journalists for the Daily Chronicle newspaper who land assignment reporting on a jewel heist in merry ‘ole England. Upon their arrival in Blighty, the foam formed trio bunkers down at the Happiness Hotel to interview the victim of the heist, socialite and fashion designer, Lady Holiday (Diana “Game of Thrones” Rigg. Enter Miss Piggy, stage left with all the sizzle and the bacon to land a job from Lady Holiday. Before you know it, Miss Piggy ends up face down in the mud as she is framed by Lady Holiday’s scheming swine of a sibling, Nicky (Charles “Midnight Run” Grodin). Kermit, now an object of affection for the high maintenance hog, leads his fellow Muppets to work together in exposing the true culprit of the caper to clear Piggy’s name.

“The Great Muppet Caper” was directed by Jim “Labyrinth” Henson in his feature directorial debut while also helming the creative duties in bringing life to the voices of Kermit, Rowlf the Dog, Waldorf and the Swedish Chef.  Henson was joined by longtime collaborator Frank “What About Bob?” Oz who infused comedy and life into Miss Piggy, Fozzie and the John Bonham (Led Zeppelin) meets Keith Moon (The Who) inspired rambunctious drummer, Animal. “Caper” is also packed with cameos by legendary talents, John “Monty Python and the Holy Grail” Cleese, Jack “Being There” Warden, Peter “Columbo” Falk, and Jerry “Sesame Street” Nelson.

“Caper” has grown in popularity over the years as it is a self-aware ambitious production which breaks the fourth wall and is a nod to the golden age of Hollywood musicals, film noir crime tropes, and a treat to see by our favorite felt covered friends of this vaudeville like universe of The Muppets. The musical numbers are entertaining, and Miss Piggy won a Youth in Film Award for Best Young Musical Recording Artist for her ditty, “The First Time It Happens.” What a ham.

The real success of “The Great Muppet Caper” comes from the genuine strong relationships that our puppet characters have amongst the ensemble, especially the love shared between Kermit and Miss Piggy. Take the time to pause your stressful adult mind and rediscover the wonder, hijinks, and genuine innocence of being a kid with this underrated title,

“The Great Muppet Caper” will be screening to celebrate its 40th Anniversary at Regal in Hamburg and Cinemark at Fayette Mall on 08/08 with showtimes 3 & 7 p.m. and 08/11 at 7 p.m. Wear your mask, stay hydrated and wax on, wax off.

Woo Pig Sooie and have a film-tastic Muppet day!