WHERE IN THE WORLD?  Gone but not forgotten: 210 Winn Avenue 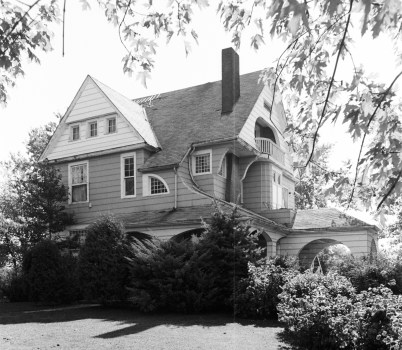 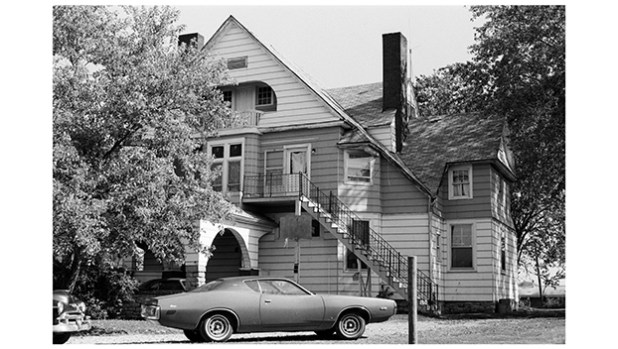 In the early 1900s Winn Avenue, with its mixture of old and new homes, had become one of Winchester’s most attractive residential neighborhoods.  Samuel A. Conn built one of those houses in 1889.  The city Handbook praised the house:

“In the northeastern part of the city, S. A. Conn is displaying much taste in the construction of a new house which he proposes to occupy as a residence.”

The Blue Book claimed “this house once vied with the Bean House (450 South Maple Street) as the outstanding Shingle Style house of Winchester, but after an ingenious recovering in aluminum siding it can only claim to be the house with the most complex wall surfaces in the city.”

Conn finished the interior of his house with many different types of woods.  And since he was a lumberman, he had access to the finest woods available.  Continuing with the description from the Blue Book, “The original interiors of the Conn House were quite magnificent with a grand staircase, a stained glass window in the library, a mahogany bathroom, and wainscoting in most of the rooms.  The grounds of more than five acres were planted with many varieties of trees and shrubs.  Conn would have served as his own contractor since the Conn brothers were builders as well as mill owners.  They were the main contractors for the 1887 remodeling of the Courthouse.”

Samuel A. Conn (1859-1917) was born in Brown County, Ohio, married Emma King, and in 1880 operated a lumber mill there.  A few years later he moved to Winchester and built a lumber mill on a lot between Winn Avenue and the Chesapeake & Ohio Railroad, about where Sword Specialty Automotive stands today.

The Handbook stated, “Winchester Planing Mills, of which Conn Brothers are proprietors, were erected in the spring of 1885.  The mills have gained a reputation second to none in the state.  They have furnished a large proportion of the materials in their line for the numerous buildings which have been erected in Winchester and vicinity since 1885 and have shipped large quantities to other parts of the state.”

While he styled his mill “Conn Brothers,” Samuel was always the moving force behind it.  His brother James came to Winchester with Samuel, resided with him and served as bookkeeper for the company.

While in Winchester, S. A. Conn cofounded the Trotting Association (1889), which had plans to build a show ring and half-mile track.  He later purchased a blooded Standardbred saddle horse.

Conn specialized in building depots for the railroad.  He constructed ten of these on the C&O line between Maysville and Ashland.

With Winchester booming, Conn speculated heavily in building lots in the town’s new additions, including 56 lots in the North Winchester Addition, a tract enclosed by North Main-Mt. Sterling Road, Mutual Avenue and the L&E Railroad.  While busy with his contracting business, he leased the planing mill to the Hagan brothers in 1890.

In 1896 S. A. Conn Lumber Company filed for bankruptcy, and four years later we find him living in Cincinnati.  He did not stay there long, relocating to Natchez, Mississippi, by 1905.  He worked for Tensas River Lumber Company, organized by the Taft-Hatch Syndicate of Cincinnati.  (One of the principals, Charles Taft, was the brother of President Taft.)  The company had a mill and 70,000 acres of hardwood timber in Catahoula Parish, Louisiana, across the Mississippi River from Natchez.  Conn served as a company officer.  After superintending the mill’s construction, he was to be its general manager.  He became ill with malaria during the construction (1911) and had to resign from the company.  Conn retired to Georgetown, Ohio, near his birthplace.  He died while on a visit to Chicago and was buried in Confidence Cemetery in Georgetown.

I used to look for the Conn House whenever I drove out Winn Avenue.  One could get the best views in winter when the leaves were off the trees.  And then one day it was gone.  The house stood on the south side of Winn Avenue, next door to the Winn Avenue Market.  The street has unusual house numbering:  the Conn House was 210, the Market is 205, then west of Jackson Street the houses bear even numbers.

The neighborhood has undergone dramatic change since the Kentucky Heritage Commission surveyed the street in 1977, documenting 35 historic houses on Winn Avenue; 18 of those houses are gone.  The west end of the street has become a commercial district and east of that, most of the houses have become rental properties.  Of the 17 historic houses still standing, almost all have been cosmetically upgraded with aluminum siding but are poorly maintained.  Walking the street, I found only three whose exterior condition might be designated as “good.”