Jackson ready to step back into reality in NBA Summer League 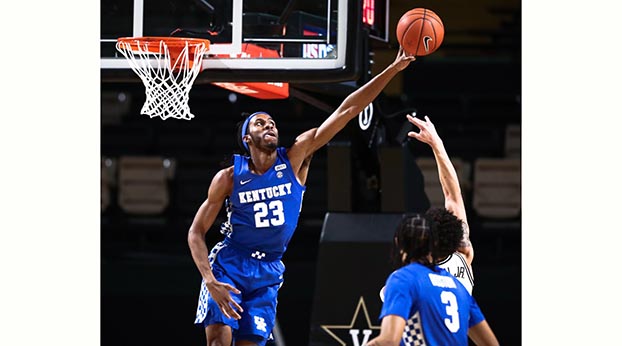 Isaiah Jackson has moved past the “surreal” moment of being chosen in the first round of the NBA Draft.

Jackson was the 22nd pick in the draft by the Washington Wizards, following a trade with the Los Angeles Lakers. After making the pick, the Wizards traded him to the Indiana Pacers. Jackson will begin his professional career in the NBA summer league that tips off in Las Vegas on Aug. 8.

“I can’t wait to start Summer League just to show everybody in the world what I’ve been working on this whole summer, what I been doing in workouts and stuff,” he said. “I want to just help Indiana win. I know like last year they didn’t have the best season but I can’t wait to get there and just help them win. That’s my whole mentality, it’s just going in and working and helping them win.”

Although he played just one year at Kentucky, Jackson said his lone season proved to be a beneficial experience.

Sarr averaged 10.8 points, 5.2 rebounds, and 1.2 blocks per game for the Wildcats and led the team with three double-doubles. He transferred from Wake Forest prior to the season.

FULL HOUSE
The Wildcats announced its plans for season ticket renewals at Rupp Arena and Kentucky expects a full capacity at Rupp Arena this season.

“I am looking forward to walking back into Rupp Arena with 20,000 packed to the rafters standing and cheering for our kids,” UK coach John Calipari said.

“Watching other sports and teams welcome their fans back, having attended a couple of events recently and seeing and feeling that buzz that the fans bring, I cannot wait to bring that back to Rupp. It truly is the greatest tradition in the history of college basketball.”

Fans were given several options for season ticket renewals.

RIVALRY RESUMES
The Kentucky women’s basketball team will renew its rivalry with Louisville next season, which will be part of the Women’s Jimmy V. Classic set for 1 p.m. on Dec. 12 at the KFC Yum! Center.

The two teams didn’t play last season because of schedule changes due to the pandemic.