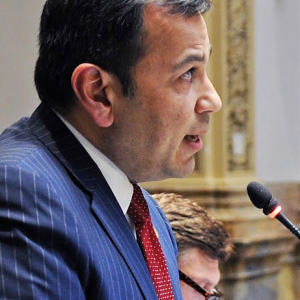 A legislative panel charged with reviewing state regulations found a mask mandate regulation for all Kentucky school to be deficient, returning it to the desk of Governor Andy Beshear for further review. The action came at the conclusion of a nearly four-hour, emotionally charged meeting Tuesday in Frankfort.

Soon after the meeting, Beshear returned a letter to the panel, deeming the regulation enacted by the Kentucky Board of Education still in effect despite the committee’s finding.

Sen. Ralph Alvarado (R-Winchester), participating in his first meeting as a member of the state’s Administrative Regulation Review Subcommittee, took  Kentucky Education Commissioner Jason E. Glass to task, arguing that masking is an issue that should be decided on the local level by locally elected officials.

“You and the entire Board of Education are not elected individuals in our commonwealth,” Alvarado, a board-certified pediatrician, told Glass during the meeting. “Our local school boards are elected by people locally. So when we talk about having mandates for anything, it should be by elected officials and not by bureaucrats.”

Kentucky Board of Education Chair Lou Young argued that the board is required by law to promulgate regulations when necessary or advisable.

“Based on the expert guidance and advice from the CDC (Centers for Disease Control) and Kentucky’s public health officials, we determined that this regulation is necessary and is critically advisable, and the members of the KBE voted unanimously to approve this emergency regulation,” Young told the committee.

“When deliberating on this issue of a universal masking requirement in Kentucky schools, our Board of Education clearly and unambiguously prioritized the values of protecting the health and safety of our students and of protecting the in-person learning experiences of our students above all other values,” Glass said. “I’m proud to stand with, and Kentucky should be grateful for, a unanimous state board who puts the health and educational interests of students first in their decision making. If we value the health of our students and their learning experiences as most important, then the decision that they made was the only good and right course to take.”

Alvarado took exception to that claim.

“You said you wanted to give local control on these things, but you didn’t,” Alvarado said, referring to previous decisions by the board on similar issues. “You don’t want to give local control on these issues. These decisions have to be made by local officials…none of us want to see our children harmed. No parent I know of wants to see their kids have bad outcomes, bad health, and be in a hospital and be sick. The fact of the matter is you all don’t trust the people underneath you to make those decisions because you think you know better, and this governor thinks he knows better.”

Alvarado – the only board-certified pediatrician in the Kentucky General Assembly – noted that no one from the Board or the governor’s office reached out to him for input, and that no superintendents were in attendance to voice their opinion on the issue because they fear retribution from the Board if they speak out.

“They are fearful that they are going to get their funding cut if they speak out against this because they don’t have the same opinion you have,” Alvarado said. “Teachers don’t speak up for fear of retribution of their jobs. Superintendents and school boards are not speaking up on this issue for fear of that as well.”

Glass said he has not threatened any superintendent or local board with funding cuts, but did acknowledge that, while the regulation does not set forth penalties for violations, schools or school boards found violating the provisions could face repercussions that could ultimately lead to cuts in funding.

Rep. David Hale (R-Wellington), pointed out that the Kentucky Superintendents Advisory Council made a recommendation to the Kentucky Department of Education to table the emergency regulation, but ultimately the board chose not to follow their request.

“I believe local decision making on most issues is appropriate, but we are not dealing with a localized issue,” Glass said.

Alvarado questioned whether the Board should even be doing what the CDC recommends, pointing out that, in a veto message of HB1 earlier this year, Governor Beshear said that “CDC guidelines are not meant to be prescriptive or interpreted as standards that can be regulated.”

Alvarado said that requiring masks for children younger than 11 years old – and especially those ages 2-5 – can lead to problems including poor language development, and that recommendations by other groups like the World Health Organization (WHO) should be taken into consideration as decisions are made.

According to their website, WHO advises that people consult and abide by local authorities on recommended practices in their area, and that children ages five years and younger should not be required to wear masks “based on the safety and overall interest of the child and the capacity to appropriately use a mask with minimal assistance.”

WHO goes on to say that masking decisions for children aged 6-11 should be based on several factors, including the “impact of wearing a mask on learning and psychosocial development, in consultation with teachers, parents/caregivers and/or medical providers.”

Alvarado said he is not opposed to masking, but that it is a decision that should not be made by the board or any bureaucrats.

“We have local elected officials who have spent a lot of time (on this issue), and every time this governor and this board has said we are going to let you make this decision, at the last second you pull the football away and you let them fall flat,” Alvarado said, comparing the administration to a widely-known Peanuts cartoon featuring Lucy and Charlie Brown. “If you want to know why you are not being effective, or anyone is being effective in the governor’s office in terms of being vaccinated, frankly it’s a matter of trust any more. When you give people that opportunity, when you tell them you’re going to do something and you don’t follow through on your word, it gets pretty tough for people to have trust in what they are being told.”