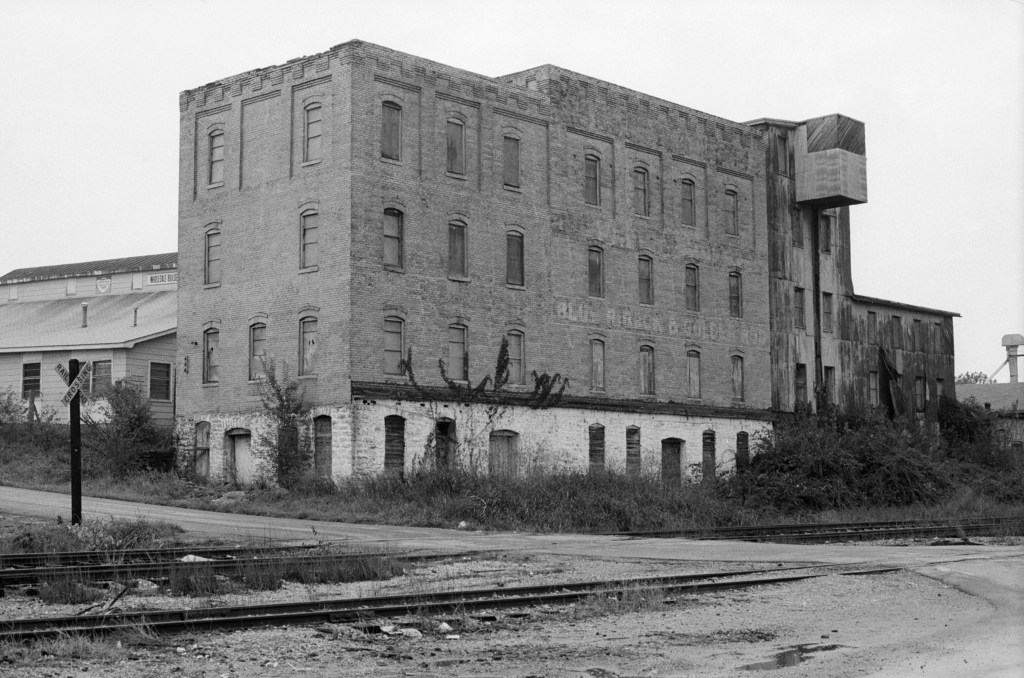 A 1906 article announced that “R. C. Mansfield & Son opened their new steam flouring mill on March 12 and are now making one hundred barrels of Best Patent, Mountain Lily and Good Luck flour and about 500 bushels of [corn] meal a day.” (Photo submitted)

R. C. Mansfield came to Winchester in 1904, purchased a lot at the corner of Pendleton and Hill Street, and erected a massive flour mill outfitted with the most modern equipment.  A 1906 Winchester Sun-Sentinel article noted that “R. C. Mansfield & Son opened their new steam flouring mill on March 12 and are now making one hundred barrels of Best Patent, Mountain Lily and Good Luck flour and about 500 bushels of [corn] meal a day.”

Mansfield’s venture faced strong competition from S. P. Kerr’s Winchester Roller Mills, which had been in business for twenty years and was still thriving; its flour brands were marketed all over Eastern Kentucky.

Reuben C. Mansfield (1843-1910) was an astute businessman.  He had taken an ancient water-powered gristmill on Red River in Powell County, installed an updated roller mill for crushing and grinding wheat into flour and turned a tidy profit.  His Winchester mill proved another success.

The Pendleton Street facility, located strategically along a Lexington & Eastern Railroad siding, stood four-stories tall and consisted of four sections.  The two brick sections at the north end (the left side of the building in the photograph) housed a wheat storage warehouse and the mill itself.  The next section was metal-sided and held an 85-horsepower steam engine.  The south end, of frame construction, held corn-shelling equipment and corn storage bins, as well as an attached blacksmith’s shop.  There were three separate frame buildings—a large wheat warehouse, a smaller corn crib and a utility building on Hill Street.

Mansfield & Son did a brisk business for a few years.  Sadly, the son, William, died of typhoid fever in 1908, and Reuben himself passed away two years later.

Winchester’s milling industry was in a turmoil, as S. P. Kerr had died in 1906.  Kerr’s successors, M. T. McEldowney, David T. Matlack, and William Woolcott, kept the Winchester Roller Mills going on Main Street.  Then in 1911 the partners closed the Main Street facility and purchased the Pendleton Street mill, which they renamed the Old Kentucky Flour Mill.  They converted the power source to a gas engine and built two large wheat warehouses.

Matlack eventually became the sole proprietor after buying out the interests of McEldowney and Woolcott.  The popular Matlack had married Kerr’s daughter, Belle, and had served a term as Winchester mayor.  No one could have foreseen the reversal he would face when the Depression hit.  Just before the stock market crash, he purchased 150,000 bushels of wheat that became almost worthless overnight.  After creditors sued, his company was placed in receivership, and the Pendleton Street mill was sold to H. H. Wheeler of Ashland in 1938.

Wheeler’s company operated as the Winchester Milling Company and advertised “Kerr’s Perfection Flour.”  The mill shut down in 1949.  A new management team reopened the mill four years later.  Having become a subsidiary of the Sandy Valley Grocery Company, the facility was revamped as a feed mill.  The mill finally went out of business and the property was sold in 1965.

I never got to see the impressive building.  I was told that the Pendleton Street mill burned in the 1990s but have not yet been able to verify that information.  The property was used for some years by the AG/GRO Fertilizer Company of Winchester.  The current owner, Kentucky Fertilizer, LLC, has a large operation on the site.  The Louisville-based business includes wholesale distribution of animal feeds, fertilizers, agricultural chemicals, and other farm supplies.  Interestingly, all around the property there are signs posted that read, “Rest Easy.”  If you stop and look closer, you will learn that “This facility does not carry any type of explosive fertilizer.”