Not overly sweet, but wonderful: the Cherry Clafoutis 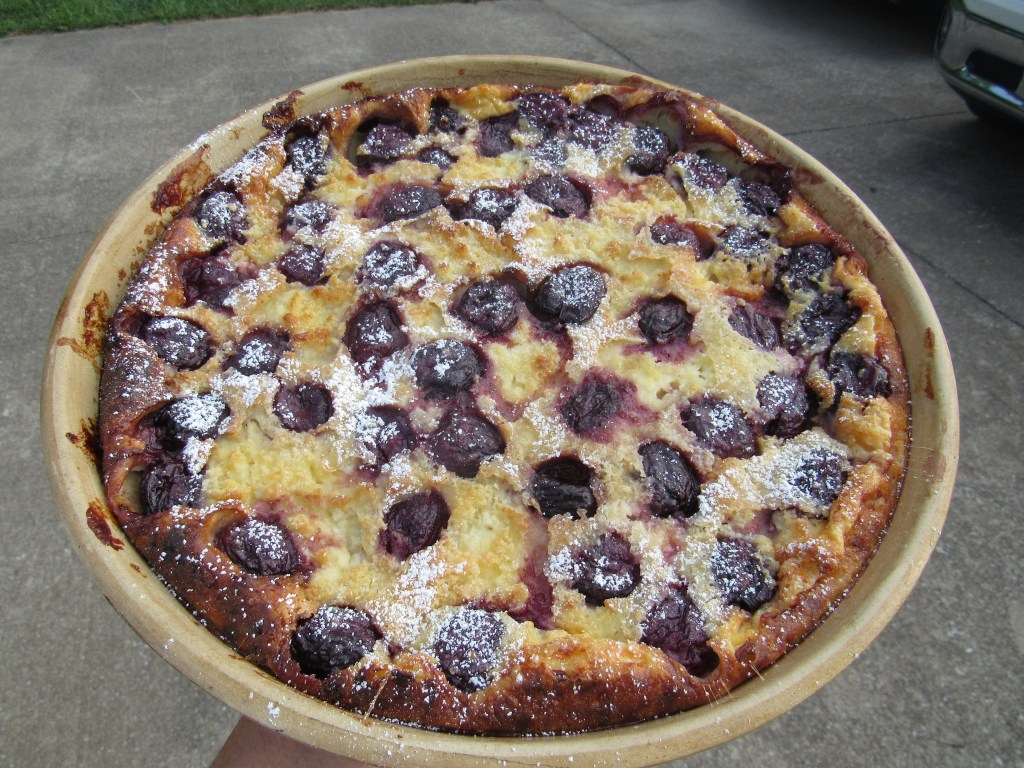 2 tablespoons unsalted butter, thinly sliced, plus more for the dish

Preheat the oven to 375 degrees.  Butter an 11-inch round baking dish and spread the cherries evenly over the bottom.

Bake until puffed and golden around the edges, about 40 minutes.  Let cool slightly, then dust with confectioners’ sugar.  Serve warm or at room temperature.

While we were on vacation in Northern Michigan, we stopped at several fruit stands/markets.  We bought blueberries, cherries, and peaches.  We bought fruit on our way to vacation and again on our way home.  I expected cherries and blueberries in Michigan, but not peaches.  All of the fruit was great.  When we got home, we had plenty of sweet and tart cherries leftover and I wanted to make something with them.  In my folder of dessert recipes to make I found today’s recipe for Cherry Clafoutis.  Clafoutis is a baked French dessert of fruit, traditional black cherries, arranged in a buttered dish and covered with a thick flan-like batter and dusted with powdered sugar.

I buttered a baking dish and poured the cherries in.  It looked like it needed a few more cherries so I added another half cup to the dish.  After whisking the other ingredients in a bowl, I gently poured the batter over the cherries and sprinkled the remaining sugar on top and added the thinly sliced butter.  Since neither Brad or I like cottage cheese, I was hoping we would not be able to taste it in this dessert.

The clafoutis went into the oven and I set the timer for 40 minutes.  The dessert smelled great while it was baking and when it was golden brown around the edges, about 45 minutes, I took it out of the oven and let it cool.  I generously sprinkled the cherry clafoutis with confectioners’ sugar after it had cooled some.

After supper that evening, while I was clearing the table, Brad asked if we were going to have dessert.  I said we could have it whenever he wanted and he said now was a good time.  Brad ate his at room temperature with some Reddi Whip on the side.  I took one bite at room temperature and then re-heated the rest of my slice to see how I liked it best.

This dessert is not overly sweet, but it is wonderful.  I think the cottage cheese must have melted during the baking time because you couldn’t taste it or see it in the finished product.  It is good hot, at room temperature, or right out of the refrigerator and is something I’ll be making again.

Even though clafoutis is traditionally made with cherries I baked another as soon as the cherry one was gone and the dish was clean.  But I instead of using cherries, I used the remaining blueberries and peaches we bought on our way home from Michigan.  It as just as easy to put together and was equally delicious.  Brad thought it was even better than the cherry one.

This recipe is a definite Nailed It and will be added to my self-made cook book.