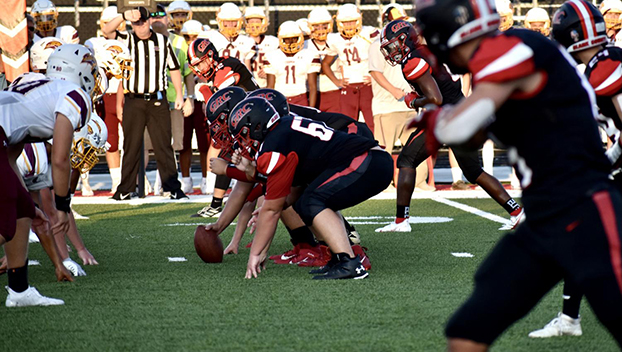 GRC’s football season didn’t start off the way they hoped it would as the Cards fell to the Cooper Jaguars 30-3 in Friday night’s game.

A back and forth first quarter left the Cards tied with the Jaguars after one quarter of play. In the final minutes of the quarter, GRC forced a fumble off a Cooper pass that allowed them to drive the ball into Jaguar territory.

Cooper’s defense forced the Cardinals to attempt a 31-yard field goal, and sophomore kicker Clay Turley split right through the uprights to give GRC the lead.

To begin the second quarter, the Cardinals defense looked good, forcing a third and very long for the Jags. The defense got lost though, and allowed a Cooper 40-yard catch and run that led to a touchdown to give the Jags a 7-3 lead.

After that solid first quarter, GRC couldn’t find a groove offensively. They had trouble finding holes to run through, and the pass game just wasn’t there.

On a late possession in the second quarter, the Cards had to punt deep in their own territory but a bad snap led to a Cooper safety and a six-point lead — 9-3 Jaguars at the break.

After the half GRC couldn’t get anything offensively or defensively to work. Cooper was able to string some passes together that allowed them to extend their six-point lead to 13 off an easy touchdown run up the middle.

The Cards may have trailed going into the final quarter but they still had hope for a comeback only being down 10.

The Jaguars had other plans though as their defense stepped up big, not allowing GRC to have any opportunities.

Cooper’s offense continued to do what they had done most of the night, finding their stride running the football to give them a comfortable victory over the Cardinals.

GRC’s 169 total yards on offense just couldn’t get it done, compared to Cooper’s 281.

Despite Friday night’s loss, Coach Chirico and his players look to keep a positive mindset moving forward into a three-game road stretch.