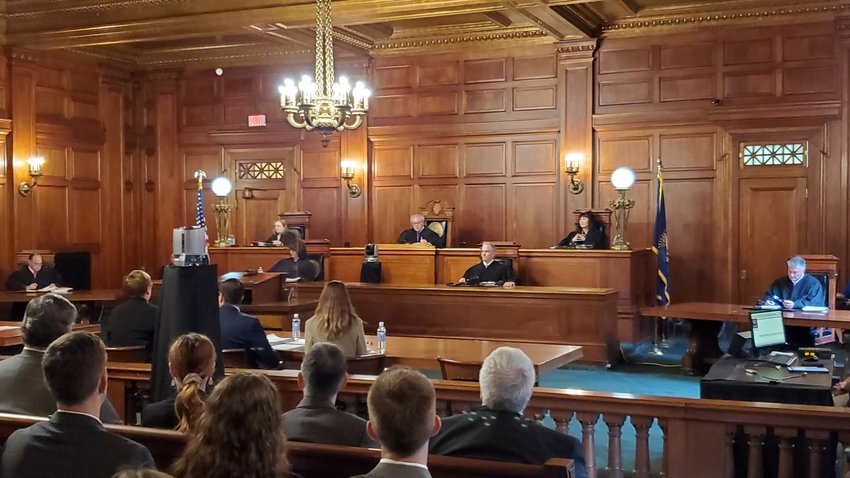 Kentucky Supreme Court Justices work on a ruling back in June. They rendered a decision in a rare Saturday Rendition Day. (Kentucky Today/Tom Latek)

The opinion, issued on a rare Saturday Rendition Day, dissolves a temporary injunction issued by a Franklin Circuit Court judge, which kept the four pieces of legislation from taking effect.

In a 34-page decision, the justices noted that issuing the injunction, “The trial court emphasized that ‘the Governor has alleged irreparable injury to his constitutional powers and made preliminary showing that the bills impair the exercise of his constitutional duty.’”

The high court disagreed, saying, “These findings are largely unsupported by sound legal principles because they are occasioned by erroneous interpretations of the constitutional authority of the Governor and law.  As a result, we find that the trial court’s issuance of injunctive relief was improper.”

Considering the challenged legislation was lawfully passed after lawmakers overrode the governor’s vetoes, the justices said the lower court judge abused his discretion.

“Thus, we remand this case to the Franklin Circuit Court with instructions to dissolve the injunction.  This case is reversed and remanded to the Franklin Circuit Court for further proceedings consistent with this Opinion.  In the event certain sections of the 2021 legislation may be ultimately found invalid, the likely remedy may be severability.”

That means part of the legislation can be found unconstitutional, without affecting the rest.

“For months, we have maintained that the Governor must work with the General Assembly during the COVID-19 crisis,” he said.  “Today, the Supreme Court unanimously agreed with our position. This is not a novel concept; in fact, it’s the bedrock of our system of government. The Court wrote that “[a]s we have noted time and again, so many times that we need not provide citation, the General Assembly establishes the public policy of the Commonwealth.” Many Kentuckians share that sentiment and applaud the steps taken by our legislature.

“We hope the governor will now consult with our General Assembly and find consensus on what is needed to protect Kentuckians.”

Crystal Staley, spokesperson for Gov. Beshear, issued a statement on the ruling.

“The court’s order will dissolve Kentucky’s entire state of emergency for the COVID-19 pandemic. It either eliminates or puts at risk large amounts of funding, steps we have taken to increase our health care capacity, expanded meals for children and families, measures to fight COVID-19 in long-term care facilities, worker’s compensation for front-line workers who contract COVID-19 as well as the ability to fight price gouging,” she said. “It will further prevent the governor from taking additional steps such as a general mask mandate. The administration will work to determine whether the General Assembly would extend the state of emergency as we assess whether to call a special session.

“The governor has had the courage to make unpopular decisions in order to keep Kentuckians safe – the court has removed much of his ability to do so moving forward. If called in to a special session, we hope the General Assembly would do the right thing,” Staley said.

Republicans were quick to respond to the ruling on Twitter.

Republican Commissioner of Agriculture Ryan Quarles, who is talking about running for governor in 2023, applauded the ruling.

“Our constitutional order does not take a break during a pandemic.  With this ruling, Governor Andrew Beshear should turn away from his lawless ways and his open disrespect for the People’s branch, and do what he should have done from the beginning: actually bring people together and lead,” Quarles tweeted.  “Soon, our courts will have another opportunity to vindicate the right of the General Assembly to set policy in a similar case: the Governor’s lawsuit against the State Fair Board & me.  The Governor is not a legislator or a king: even he is bound by our constitution & laws.”

Republican Secretary of State Michael Adams on Twitter: “Acting alone is not leadership; it’s literally the opposite of leadership. As the conduct of our 2020 elections showed, the governor is most effective when he works with others. I hope he will take this opportunity; our state will be better for it.”

Senate Majority Leader Damon Thayer, R-Georgetown, said this on Twitter: “Victory for co-equal branches of government, balance of power & the people’s branch of government. There are no implied or inherent powers given to the executive branch. Enumerated powers are in the Constitution, all other powers are granted by the General Assembly.”

Republican State Auditor Mike Harmon, who has announced he is running for governor in 2023, issued this statement.

“Today’s ruling by the Kentucky Supreme Court reaffirms the clear checks and balances that exist between the Executive and Legislative branches and how essential those are to prevent overreach by one side or the other.  The General Assembly serves as a voice for those Kentuckians who elect its members, and it is the proper place to create laws and oversight.

“All this could have been avoided if the governor would have simply communicated and worked with the members of the General Assembly in determining the best courses of action at the start of the pandemic.  But instead, the governor chose to take a path that did not include everyone at the table. Instead, guided by his own opinions, he chose to pick winners and losers arbitrarily.

“Future governors should adhere to the opinions of the court and be an equal partner with the legislative branch.  In my opinion, that is truly the team approach Kentuckians need from their public servants.”

Republican House Speaker David Osborne and Senate President Robert Stivers issued a joint statement, saying they “continue to stand ready to work with the governor, as we have for nearly a year and a half, and address what is a very real public health crisis.”

“After months of deliberation, the Supreme Court has confirmed what the General Assembly has asserted throughout this case — the legislature is the only body with the constitutional authority to enact laws,” they wrote. “Let us be clear that today’s ruling in no way diminishes the seriousness of this virus or its impact on our commonwealth, and the General Assembly will continue to work to maintain both the safety and rights of all Kentuckians.

“The General Assembly has made it clear on numerous occasions that its disagreements with Governor Beshear were founded in process. This fact is affirmed throughout today’s decision, in statements like ‘the Governor has no implied or inherent emergency powers beyond that given him by the legislature,’ and ‘the General Assembly establishes the public policy of the Commonwealth.’”

In a second opinion issued Saturday, the justices unanimously threw out a Scott Circuit Court decision in a lawsuit filed by Goodwood Brewing Company, stopping the governor from issuing executive orders that they said would restrict their businesses.

They determined the governor was not allowed to call witnesses and present evidence, and found every order involved, except the original state of emergency order, has been rescinded by the Governor.  They declared the case moot.