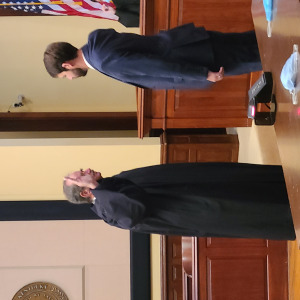 That’s how Robert Jennings described being sworn in Friday as a new district judge for the 25th Judicial District, Division 2, covering Clark and Madison counties.

Jennings was sworn in by his father, retired Judge William T. Jennings, who served in the same seat from 1978 to 1984.  “Honestly, it’s a dream come true for me,” Jennings said. “It’s the culmination of a lot of work. It hasn’t really sunk in yet because I know there is a lot of hard work ahead of me, but it’s a great feeling knowing that you have a chance to help people.”

Robert Jennings, a life-long resident of the district he serves, is a 2013 graduate of the University of Kentucky’s J. David Rosenberg College of Law and was a general law practitioner in Richmond for the last eight years. He fills the remainder of Judge Cole Adams Maier’s term following her appointment to serve as a Circuit Court judge.

William T. Jennings said it was “hard to put into words” how proud he is of his son’s achievement, and he believes his son has the the qualities to make him a good jurist.

“Well he’s a hard worker, for one,” said Jennings, who went on to serve as Circuit Court judge for the 25th Judicial Circuit before retiring in 2008. “I think he knows what the judicial system requires in a judge and he can do that. He’s in a learning mood and will learn from the other judges how to develop his own procedures and so on.”

Jennings, who at his retirement was the longest-serving judge in Kentucky, said his son will experience a very different bench than he did.

“It has changed tremendously, particularly the number of cases that a judge has,” William T. Jennings said. “The population of Winchester and the number of people that are appearing in court have certainly gone further than having three judges.”

The younger Jennings admitted that he has “big shoes to fill” in following his father to the bench, but that he also sees it as an honor.

“It really is amazing the reputation he has on the bench,” he said. “If I could live up to half of it I’ll feel comfortable knowing that I did a good job.”

Serving in the legal profession is a Jennings family tradition. Besides his father being a judge, Jennings’ mother was a paralegal and his older brother is an attorney.

When he was a young man, Jennings joked that he thought a judge was “someone who traveled around places and people went up and said hello to them,” but when he became an attorney he saw that being a judge gives a person “the chance to do good even if you are holding someone responsible.”

Jennings said he wants the people of Clark County to know that he takes the words in his oath seriously.

“I took an oath of service today and that means service to everyone in the community. As judge – regardless of people’s backgrounds or political beliefs – you are serving them. That’s honestly my belief and the reason I am accepting this duty.”

Jennings’ first full day on the bench was Monday, which happened to also be his birthday.