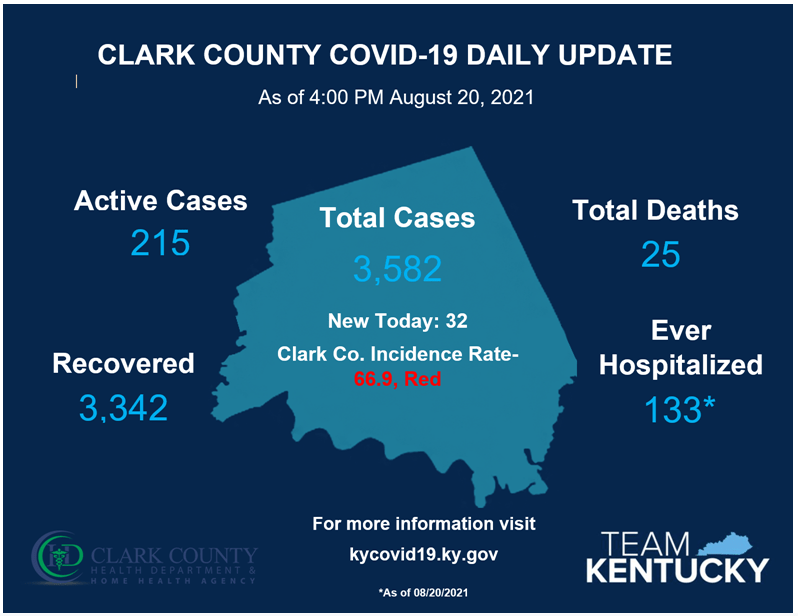 FRANKFORT, Ky.  – While not as high as Thursday, Friday saw 3,869 new cases of COVID-19 reported to state public health officials, meaning the work week ended with a total of 17,607.

The number of deaths has now topped the 7,500 mark, as six new cases were announced Friday.  There were also 34 more deaths added to the list on Friday, due to an ongoing audit of death certificates issued since Feb. 1.  That means 7,517 Kentuckians have now been lost to COVID-19.

Kentucky’s positivity rate has also continued to climb every day this week.  On Monday, it was 12.4%, rising to 12.8% on Friday.

“That’s the highest it has been since we had enough testing to get an accurate positivity rate,” said Gov. Andy Beshear.

A total of 115 of Kentucky’s 120 counties are now in the red zone, meaning they have a COVID incidence rate of at least 25 per 100,000 population.  The five exceptions are Clinton, Fulton, Hickman, Robertson and Wayne counties.  Those are all in the orange category, with incidence ranging from 12 to 24 cases per 100,000.

The hospitalization number is higher as well, with 1,780 Kentuckians in the hospital.  Of them, 487 are in the intensive care unit and 255 are on a ventilator.  Back on Monday, those numbers were 1,528 hospitalized, 429 in the ICU and 224 on a ventilator.

“This is the most dangerous time, especially if you are unvaccinated, that we have seen in this pandemic,” Beshear said in a Facebook video.  “And we are running out of beds that our nurses and our doctors can staff, as our numbers are going through the roof.

There is one rising number that is good news, the number of Kentuckians who have either received the Johnson & Johnson vaccine, or at least one shot of the two-dose Moderna and Pfizer vaccines.  On Friday, it reached 2,444,573.

Gov. Beshear is expected to update the COVID situation in Kentucky early next week.