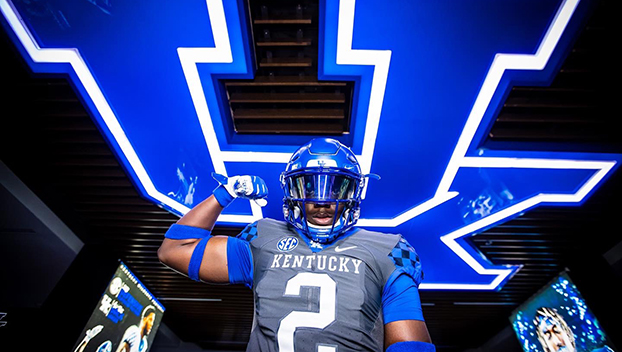 “They see me replacing (senior defensive lineman) Josh Paschal. They showed me tape of him making plays and showed him chasing down running backs and said those are the same things I can do,” said Durojaiye, who averaged about one quarterback sack per game last season.

He admits having a chance to play early was part of the reason he picked UK over West Virginia, Vanderbilt, South Carolina, and Georgia Tech — his other finalists.

“I know playing is up to me but I would like to be able to get meaningful time as a freshman and then be able to play regularly as a sophomore,” the Delaware lineman said.

Setting the bar high is not something that worries Durojaiye.

“I know it won’t come easy. I want to be the best defensive player to come through the program,” he said. “With this staff, I feel I have all the resources I need. It’s a matter of how much sacrifice I put in and will I sacrifice more than other guys.

“Josh Allen won every defensive player of the year honor (in 2018). The bar is set high with him being the leader of that team. But I want to eventually be a (NFL) first-round pick, a top pick.

“I know Kentucky is the right place to develop me to my fullest potential. I like the whole staff. I just got a special bond with the people at the university and from being around the team.”

Durojaiye had 22 scholarship offers but garnered only a three-star rating from Rivals.com. Kentucky was his last offer in May — five months after he got his first offers — but he had been talking to UK since the end of his sophomore season.

“I didn’t know Randall Cobb went to Kentucky until I took my visit and I got to see all the guys they had in the league,” Durojaiye said. “I knew about (quarterback) Tim Couch and his success.”

However, history didn’t seal the deal with the Delaware lineman. Instead, it was time he spent with Paschal on his visit.

“Josh is pretty cool and such a down to earth guy,” Durojaiye said. “He’s a humble leader and I was really glad I got to spend time with him. We even got to go out bowling. I got to hang with him and pick his brain a lot.”

Arkansas, Iowa, Michigan and Maryland were some of the other scholarship offers he had. He feels he would have had more if he had gone to summer camps.

“Penn State, Florida, Florida State wanted me to come to camps but I liked the offers I had,” Durojaiye said. “I look at my tape and so many guys ranked ahead of me, it is neck and neck on whether I am better than them.

But I don’t really pay attention to rankings. At the end of the day, the rankings at the next level do not really mean anything.

He only had a few offers. Same with Bud Dupree. As a high school kid it is cool to have stars by your name but I don’t let that distract me. Rankings don’t control my performance.”