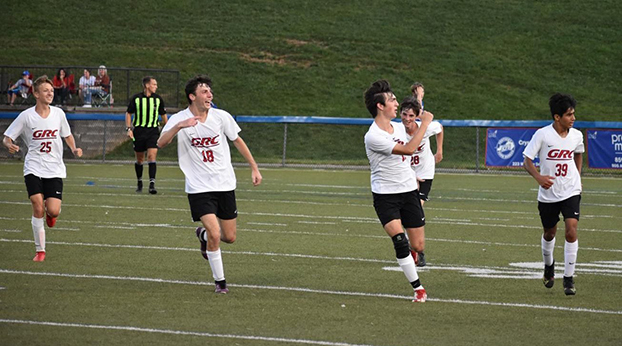 The GRC boys soccer team had a tough competition with the Montgomery County Indians Thursday night that ultimately ended in an upsetting 3-2 overtime loss.

With a record of 3-2-1, the GRC Boys soccer team anticipated a highly competitive game last night against their biggest opponent, Montgomery County.

The Cardinals’ nerves were very present after an unfortunate loss by their Junior Varsity team just moments before. Even in the warmups, their energy was serious and focused.

From the kickoff, Montgomery County took control of the game with a quick lower left corner goal in the first two minutes. However, the Cardinals did not let that convince them to give up.

Both teams had plenty of goal opportunities for most of the half, but with saves from Cardinal goalkeeper Tennyson Prater, GRC was determined to stay in the game.

GRC drew Montgomery County’s defense to the right side of the field, just before switching the field to the left, where PK Vogel was waiting with a run straight to the goal. A front post shot left the game tied 1-1, ending the half.

As the second half began, the crowd and players were even more nervous than before. GRC stepped up its game, striving for a more possession based play and through passes to the corner.

A defensive slip up by GRC led to a Montgomery cross into the box with a fast touch-and-shot finish, gliding just past Prater’s reach, making the score 2-1 Indians.

The Cardinals attempted to reset their offensive tactics while their defense continued to stay strong against the Indians’ aggressive forwards.

For the rest of the half, the Cardinals had limited chances to score, but never gave up on attempting to catch up to their competitors.

Beltran made the goal with a hard shot toward the left.

With 58 seconds left in the game and the score tied at 2-2, the game was destined to a golden goal overtime. The Indians had other plans.

Despite GRC’s best efforts during the 80-minute game, Montgomery County caught the Cards off guard with a long-pass kickoff where they could not recover, resulting in a goal and the 3-2 victory for the Indians.

The Cardinals hope to bounce back after this hard-fought loss, with the goal to see Montgomery County again in the District Tournament.