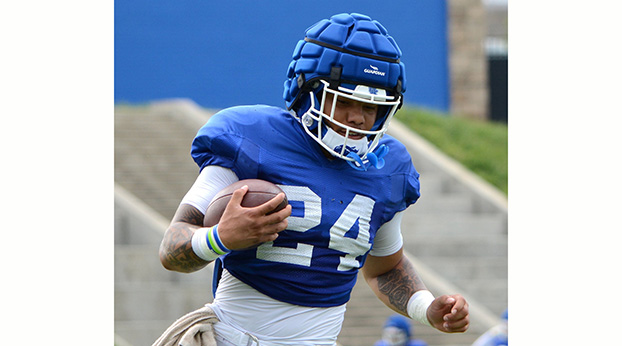 Chris Rodriguez doesn’t mind standing in the shadows of the rest of his teammates.

Although much, if not all, of the preseason attention has been centered on offensive coordinator Liam Coen, receiver Wan’Dale Robinson and quarterback Will Levis during fall camp, Rodriguez has been equally impressive and will be a key component of the team’s running attack this season.

“We still know (we have to run the football),” Rodriguez said. “The coaches know and we’re going to do some different stuff, but we’re ready and we’re still going to get the football. That’s the plan.”

Knowing the running game hasn’t been shelved, Coen has noticed a big difference in his top running back’s demeanor leading up the season opener against Louisiana Monroe on Saturday.

“Chris has just done such a good job, especially the last week — Chris has really ramped up,” Coen said. “He’s laser-focused in his approach to practice, he’s finishing runs … I’ve gotta believe Chris Rodriguez is going to be ready to go.”

As a daily reminder of his personal goals, Rodriguez has a list compiled above his bathroom sink and gives them a glance each morning before he begins his daily routine.

“Obviously I want to break records, score touchdowns and I want to to be able to pick up (defensive pressures) and I don’t want anything to get by,” he said. “I want to be the best back in the Southeastern Conference, which is what I’m working toward right now.”

Levis added that Rodriguez is among one of the best running backs he has shared the backfield with, even dating back to his time at Penn State.

“I’ve been around a lot of great running backs and Chris is right up there with the running backs that I’ve played with,” Levis said. “Chris and Kovosiey Smoke are going to be a great 1-2 punch for us and some other guys are definitely going to be able to get in there and run the ball to show that we have a mix of runners that are going to contribute for us (this season).”

The bottom line, Coen said, is to take advantage of Kentucky’s experience in the backfield, anchored by Rodriguez.

Coen emphasized that balanced is the key when it comes to achieving success on the offensive side of the ball.

“I’m a crazy man if I don’t hand the ball to those backs,” he said. (We’re) just trying to continue to work on balance when you do have those guys in the backfield and feel good about those guys up front, but still trying to get better in the pass game, it’s ‘OK, how do we continue to work on that balance? — especially going into a first game. The things that you’re trying to improve on you want to try to see some tangible evidence of.”