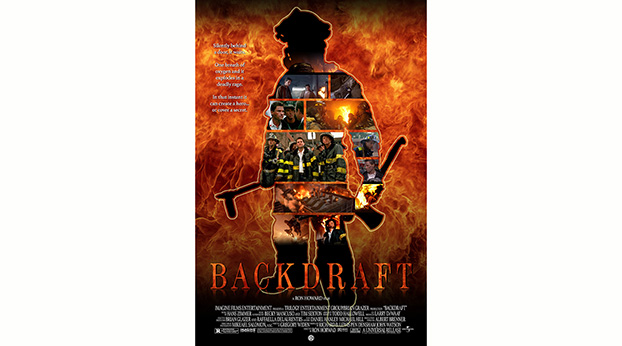 Labor Day Weekend has come once again. This weekend is the unofficial end of summer but the official long weekend to celebrate the American worker. The first Monday in September every year, we honor the American workers’ sacrifices, blood, sweat, and tears which contribute to our national prosperity and international identity as a success-driven nation. Many occupations demand a lot of its workers and in return compensate its dedicated workforce with lower compensation that what is to be expected. Firefighters are what come to mind as well as police and our military members. This group of selfless heroes put their lives on the line every time they run into a raging fire to save and render aid to those in emergency situations. What better weekend to honor our thermal event terminators as Fathom Events and I share with you the Oscar nominated, action thriller, “Backdraft” (1991).

Chicago firefighting brothers of Engine 17, Stephen (Kurt “Big Trouble in Little China” Russell) and Brian (William “Flatliners” Baldwin) have been rivals since childhood. Younger brother Brian, struggling to prove himself professionally and personally, transfers to the arson unit in attempt to escape the shadow of Stephen. Stephen is a by the book firefighter whereas Brian is looked upon as an unorthodox and unsafe worker when dealing with the extinguishing of the fires they extinguish day in and day out. Brian’s perspective to every aspect within his life is in part of viewing the traumatic death of his firefighting father when he and his brother were younger before being mentored by surrogate uncle, fellow firefighter Axe (Scott “The Silence of the Lambs” Glenn).

With all the brotherly conflict between the two, a slew of serious oxygen-infused fires known as backdrafts have ignited throughout the Windy City.

Brian aids fire inspector Don (Robert “Goodfellas” De Niro) in his investigation into these arsons which are threatening citizens and firefighters with these backdraft infernos. Upon the investigation, things heat up as conspiracies involving politics and an arsonist are revealed and the ignitable tension between Brian and Stephen comes to a flash point as the two try to crack the case before more innocent lives are turned into nothing more than ash.

“Backdraft” was directed by Ron “Gung Ho” Howard with a screenplay by Gregory “Highlander” Widen. “Backdraft” is more of a special effects driven film than a deep character study, but is entertaining nonetheless with the support of talents such as Donald “Outbreak” Sutherland, Jennifer “Fast Times at Ridgemont High” Jason Leigh, Rebecca “Risky Business” De Mornay, and Howard’s brother and famous character actor, Clint “3 From Hell” Howard. Though critics panned some of the plot and character development or lack thereof and real fire experts calling that the film is not accurate in regards to real emergency response when dealing with fire, the film was still a success as it brought in over 150 million dollars off of a 40 million budget. Smokin!

“Backdraft” is not the “Citizen Kane” of fire or emergency response cinema but more inline with fire fare eye candy extravaganzas titles such as “Hellfighters” (1968), “The Towering Inferno” (1974), and “Ladder 49” (2004) but considered a masterpiece to its direct to video dud of a sequel, “Backdraft 2” (2019). Only you can prevent bad sequel fire movies.

If you are new to the title, give it a shot and if this is old hat, give it another try. Let’s not forget our local firefighters that sacrifice so much for their communities and never ask for anything in return except for us to act safe. They are always putting their lives on the line for us and always put the needs of those before themselves. They are true heroes and on this Labor Day, we salute you and tank you for your service.

“Backdraft” will be screening to celebrate its 30th Anniversary at the Regal in Hamburg and Cinemark at Fayette Mall on 09/05 & 09/08 with showtimes 3 & 7 PM.

Stop, drop, & roll, and have a film-tastic, fire-free Labor Day!