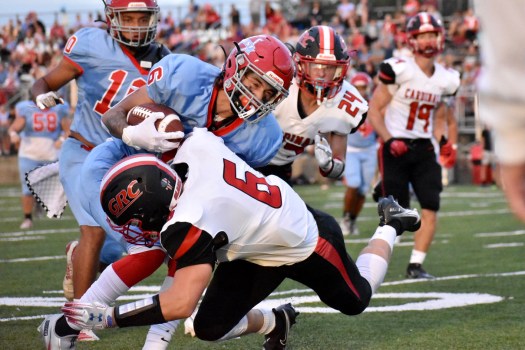 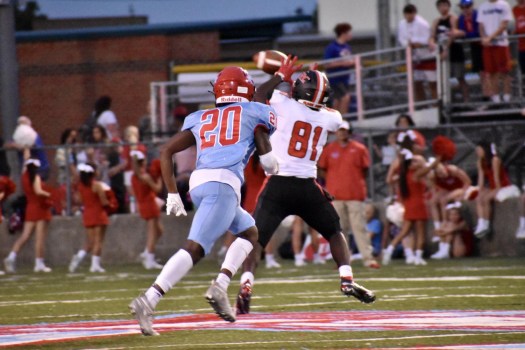 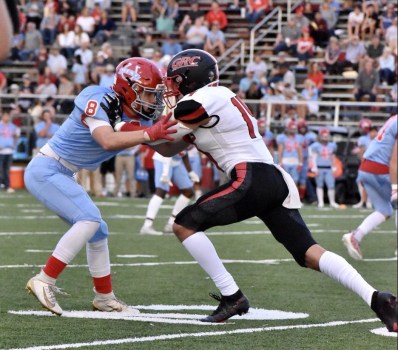 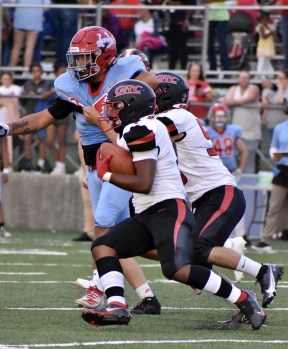 Kalen Washington is on the move for the Cards. - Photo by Cameron Anderson, GRC Smoke Signals

GRC’s hopes of a late comeback came up short Friday night in a 35-21 loss at West Jessamine.

Turnovers were the main problem Friday night in the Cardinals’ loss. GRC started with the ball to begin play and on the opening possession threw an interception that led to a Colts touchdown on their first possession of the game.

After a GRC empty possession, the Card defense held the Colts to a big fourth and short. Defensive back Carter Lowe made a great tackle to force the Colts short of the line to gain and set the Cardinals up in great field position.

GRC couldn’t capitalize and trailed 7-0 after one quarter of play.

Quarterback Brady Denham found his stride in the second quarter, stringing multiple passes together to move the ball in the red zone.

On a big third down, Denham found his tight end Jaylen Berry short of the end zone who shook off a defender for a big Cardinal Touchdown.

Kicker Clay Turley made the extra point and GRC found themselves tied with the Colts midway through the second quarter.

West Jess quarterback Jacob Jones strung some nice passes together to get his team in scoring position late in the quarter. On a very short third and goal the Colts were able to punch it in for six.

With very little time left in the half, Coach Chirico had to make the decision on whether he wanted to play for the half or go try to get some quick points.

Denham continued to throw it effectively, and was able to set up a long field goal attempt before the half ended. The defensive line put enough pressure on Turley, causing the kick to flutter just short. The Cardinals trailed 14-7 headed into the half.

West Jessamine received to begin the second half and extended the lead to two touchdowns after another short touchdown run.

But GRC‘s offense didn’t go away, as running back Kalen Washington found many gaps, moving the ball quickly into Colt territory.

On another third and goal, Denham handed it off to Washington who found a gap on the outside and punched one in to get the Cards back within a TD score.

West Jessamine’s offense continued to play well, getting in position to score once again.

The Cardinals’ defense came in clutch to end the quarter, holding the Colts to a big fourth down that was not converted after a huge stand by the D-line. The Cardinals went into the final quarter trailing 21-14.

In the fourth quarter, the GRC offense was able to move quickly into great field position, with a chance to tie but threw an interception leading to a West Jessamine 50-yard bomb over the middle to take a 14-point lead once again.

The Cardinals needed to get moving in order to make a comeback.

On their next possession though, the offense turned it over with time being a factor. The defense quickly forced a big fumble to give the Cards another chance.

Denham connected with his running back, Washington, over the middle who had great blocks in front of him and took it to the house. In a matter of minutes the Cards were right back in it, trailing 28-21.

But the defense was gassed and couldn’t get one final stop. The Colts were able to put the game on ice and pull out a 35-21 victory.

GRC will travel to take on Montgomery County next week for the War on I-64.